By Bikash Mohapatra
November 16, 2010 19:01 IST
No one gave Daniel Vettori's boys a chance when they arrived in India.

When New Zealand embarked on the tour of India no one gave the Black Caps a chance.

The Black Caps had been humiliated in Bangladesh (thrashed 4-0) and were not considered good enough to challenge Formidable India, the No 1 Test nation on the planet, fresh from defeating a competitive Australian side (2-0) on home soil.

Daniel Vettori's side was at best expected to provide some practice for Mahi Dhoni's confident Indian team ahead of their tour of South Africa. 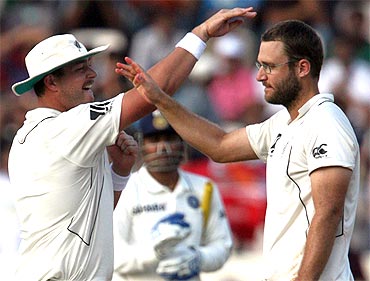 Three Tests were considered too large a number for a side that has a poor record in the game's longer version in recent years.

The legendary Sunil Gavaskar declared that the visitors didn't have the bowling arsenal to take 10 Indian wickets.

Even Kiwi coach Mark Greatbatch didn't give his side a chance.

'Two draws would be a good result for me,' Greatbatch, a swashbuckler in his time, was quoted as saying before his team's departure, clearly giving up the battle even before hostilities could commence.

The Black Caps have clearly underlined their credentials with successive draws, results significant in magnitude considering that no one gave them a chance.

Vettori's boys may be an under-strength side, shorn of big-ticket stars, but underestimate them at your peril.

With only the Nagpur Test left, the visitors may still lose the series. However, they can return home with their heads held high.

They need to be applauded for being quick to realise their flaws and working towards camouflaging the same.

Bowling was certainly not their strength coming into the series. Hence, the situation demanded better application from the batsmen.

It is not that the New Zealand batting was fault free -- the collapse in the first innings at Hyderabad dented their chances of making a big score and putting pressure on India.

But their batsmen's resolve has helped negate India's superior skills.

If Brendon McCullum's sacrifice -- the Kolkata Knight Riders star gave up his wicketkeeping gloves for a meatier role up the batting order -- ensured the desired results, then in Tim McIntosh the Black Caps have unearthed an opener willing to learn from failure. How else can you explain the ton that followed the pair at Motera?

Jesse Ryder, of course, loves to bat against India, that was proved yet again. And while Bangalore Royal Challengers's Ross Taylor failed at Uppal, he was among the runs in Motera. Martin Guptill, a replacement for a failing B J Walting, proved his worth in the second Test with a well-made 85 in the first essay.

And in young Kane Williamson, New Zealand have unearthed a star for the future.

The 20-year-old made a magnificent 131-on-debut at Motera and followed it up with a resolute 69 in the second innings at Uppal. His fifth-wicket partnership with McCullum yielded NZ 124 runs and erased any chance India may have fancied on the final day.

The New Zealand batting inspired their bowlers to some extent. How else can you explain Chris Martin's five wicket burst on the fourth day at Motera?

Martin, who hardly fits the description of a strike bowler and is arguably in the team owing to lack of options, had never been as destructive in one spell.

In the first innings in the second Test, the Kiwi bowlers kept things under control before Harbhajan Singh's blitzkrieg.

In Daniel Vettori they have an inspiring leader who is pragmatic to understand that he has limited resources and is willing to make the most of it, much like his illustrious mentor Stephen Fleming.

The Kiwis have exposed two facts: First, Team India, despite its top ranking, is yet to become a dominant Test nation.

Second, Indian wickets are anything but competitive!

For a team considered near-unbeatable at home -- it has lost just one series at home in the last 10 years and just two Tests in the last five years -- India's record against New Zealand is not much to crow about.

India has not beaten New Zealand at home in 11 years -- an eight wicket win at Green Park in Kanpur in October 1999 being their last triumph over the Black Caps.

The last five Tests between the countries on Indian soil -- and eight of the last nine dating back to 1995 -- have ended in stalemates.

New Zealand's resolve, vindicated by these well-earned draws, has given the Indian think-tank much to worry about ahead of the final encounter in Nagpur.

A 1-0 series win over a team ranked 8th in the world may not be a flattering result for the planet's top-ranked nation, but -- with no glory to show from Motera and Uppal --still offer Dhoni and his boys some consolation. 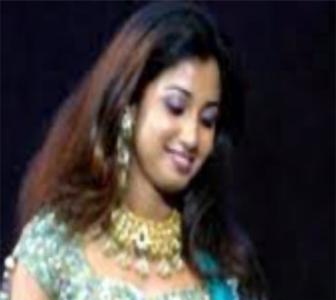 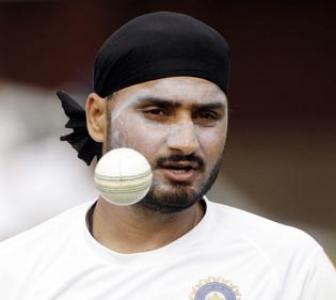 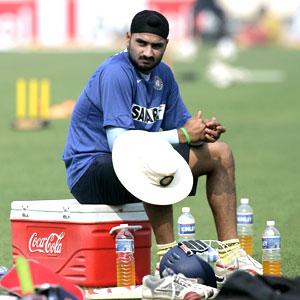 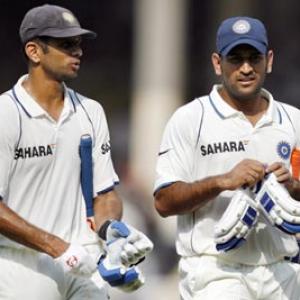