Not so long ago, there was random moaning about increasing parochialism in Indian cricket. Players were being booed in the home stadiums of their perceived rivals; it was no longer about wanting the team to do well, so much as it was about wanting local stars to shine, even if the overall result was defeat -- so ran the complaint. So now that we have a league based entirely on parochialism, we are reduced to complaining that those tribal loyalties have shown no sign of kicking in?

It does not matter to the crowd that their own Bangalore team is being ripped apart by some mind-boggling hitting by a New Zealander who is playing for the Kolkata team.

Most in the audience don't even know his name -- McCullum is even otherwise hard to pronounce. It does not matter for a while as they have all come for entertainment but as the minutes turn into hours, the response of the raucous crowd somehow goes tepid, not knowing whom to support.

Whether to enjoy Sourav Ganguly's dismissal or to celebrate Ishant Sharma's pace magic in shattering their own Rahul Dravid's stumps. 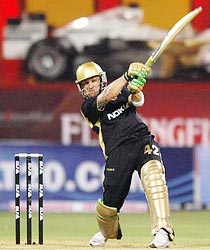 That is Pradeep Magazine, in the Hindustan Times; his is not the sole lamenting voice. From the Observer:

The fans will be trickier to win round. McCullum's antics reportedly boosted ticket sales in Kolkata ahead of today's match at Eden Gardens, but the turnout in Mohali yesterday was disappointing. Clearly, support cannot simply be bought. As Bobilli Vijay Kumar put it in the Times of India: 'Despite all the witty ads on television, no Delhiite or Chennaiite is treating the team from their cities as their own as yet.'

The lack of local tribalism was in evidence at the M Chinnaswamy, where the biggest cheer came before the game had even started. As each of the captains was called on to the stage by a near-hysterical Ravi Shastri, acting as MC, the stadium erupted for Sachin Tendulkar, ostensibly representing the Mumbai Indians, but in reality an ambassador for an entire nation.

Avijit Ghosh in the Times of India, and Bruce Loudon in The Australian, riffed on similar themes. From the latter:

In India, solid data on innovations is hard to come by and notoriously slow in appearing, but anecdotal indications are that the cricket-mad Indians, who got hooked on Twenty20 when the country won the World Cup in South Africa last year, are now addicted to the IPL and, according to one survey published yesterday, more enthusiastic about it than Test cricket.

There remains, according to a survey in the Sunday Pioneer, a majority preference for a form of cricket in which Team India is playing and the corollary from this is that, as forecast, the matter of building city --based loyalties for IPL teams remains a work in progress.

But for all the glitz and glamour and razzamatazz of each IPL match during the weekend it seems there is overwhelming support, and while there is not yet any solid indication about television audiences, it is believed that the usually under-watched Max channel that is screening the series has won millions of new viewers.

The key phrase is 'work in progress', really. If you could pinpoint one reason for the underwhelming performance of the Indian Cricket League (ICL) thus far, it lies in the fact that the Subhash Chandra-helmed league has not managed to create sufficient local interest. Not the ICL's fault really; more a fall out of the BCCI's monopoly on venues that prevents the ICL from taking its show across the country. The IPL in his aspect has an advantage -- the home and away format is ideally suited to build parochial loyalties, as Rahul Dravid found out the other day.

But even the Indian cricket fan has his saturation point and it is far more likely to be reached if he feels a lack of connection with events on the pitch. Well, it hasn't been reached yet, and for Rahul Dravid, so used to being the darling of fans in this country wherever he goes, the experience was a novel one. "It was a fantastic atmosphere," he said, "but I'm not used to a crowd like that. Whenever I've played here before for India, the crowd have been rooting for you. But here, I hit a four and no one clapped. I think I'll have to get used to that over the rest of the tournament."

I'd think it is a touch too early to theorize that the league has not built up parochial loyalties. Of course it hasn't -- or at least, not to the extent of attaining critical mass. But then, the tournament is all of four days old; surely it is a touch premature to analyze whether, or no, it has succeeded in building that kind of loyalty? What seems quantifiable, to an extent, is the interest level. The Economic Times has the story.

The Indian Premier League (IPL) seems to be living up to the hype. Though it is early days in the life of the 45-day tourney, a first look at the ratings by TAM Peoplemeter System shows that IPL has delivered a record opening. The first match played in Bangalore between Shah Rukh Khan's Kolkata Knight Riders (KKR) and Vijay Mallya's Bangalore Royal Challengers (BRC) on Friday delivered ratings of 8.21 with 12.5-million people tuning in to watch the match.

The next two matches -- Chennai Super Kings versus Kings XI Punjab and Rajasthan Royals versus Delhi Daredevils -- saw viewership dip slightly to 4.97 and 5.58, respectively, but that's still substantially higher than all non-India matches played in the World Cup, which averaged TRPs of 2-3. The recent India-Australia ODI series delivered TRPs of 4-6 despite the much-talked about racism row. IPL ratings are also in stark contrast to Subhash Chandra's ICL which posted TRPs of less than 1 in its inaugural season last year and fared only marginally better in the second. The ratings are for six metros -- Mumbai, Delhi, Kolkata, Bangalore, Hyderabad and Chennai -- across a target group of four-years-plus cable & satellite homes.

Moving on, Amit Varma suggests that the new league has its uses -- and that much of the sneering commentary is off the mark.

Most sports in the world are over in less time than a Twenty20 game. All popular sports, in that much time, pack in immense drama. Regular fans of those sports appreciate the sophistication in each of those games, and can talk about the nuances endlessly. Why then do so many of us speak of Twenty20 as if it is gilli-danda? Cricket has immense amounts of scope for drama in its DNA, and involves, in my admittedly biased view, a greater range of skills than most other sports. It is not a handicapped child of the sporting world that it needs a full day or five to reveal its riches. Three hours is enough, thank you -- and to suggest otherwise is to do the game a disservice.

Sharda Ugra looks ahead, at the challenges the success of IPL will pose for the more 'traditional' forms of the game, and suggests that the administrators will need courage and sagacity to deal with it, and to survive.

They will demand an expanded calendar for the IPL and will refuse to be refused. Then, the six-week window which ICC refuses to make room for as if it were an illegal tenant, will seem like a demure knock on the door.

In order to deal with the upheaval caused by the IPL, cricket as a whole will need wisdom, sagacity and foresight. The IPL hierarchy is a stranger to those qualities as it only embraces brand value, marketability and an institutional arrogance.

In the best-case scenario, all three forms of cricket will survive and the IPL will become the template for successful T20 leagues that bring crowds to domestic games. At the other end of the scale is that apocalypse.

But it is worth understanding that if Test matches are extinct two decades later, it will be because cricket -- its governors, its players and its entire community -- didn't fight hard enough for them, didn't believe them to be worth preserving.

While on looking ahead, Harsha Bhogle did some of that in his latest column:

The franchise holders will sit down in the first week of June and see if it has been worth it. Their assessment of success will be based on the number of people who come in through the gates, the number of people who watch and the possibility of merchandising and countering the instantly available fakes in the market. They will also want a few more guarantees with respect to scheduling and, therefore, with the choice of players. Before they sit down for their next round of spending, they will have to know what they are buying. Do they have a player for the entire season? Will he suddenly go away to play a domestic tournament? Franchisees are not in this for mindless spending and they will want a clearer picture next time.

No IPL round up is complete without the usual quota of naysayers; here's the granddaddy of them all, William Rees-Mogg, on why he is anti the IPL.

Twenty20 is also less interesting than the other forms of one-day cricket. In a one-day match of 40 or 50 overs, time is an essential element, as it is in four or five-day cricket. Different phases in these games call for well-judged captaincy and varying batting and bowling skills.

But the organisers of the IPL seem, at this stage, to have missed a couple of tricks - and they could prove extremely, perhaps terminally, damaging. Yesterday, sandwiched between the successes in Bangalore and Delhi, came a match in Mohali in front of a stadium that was half-full - a match which saw a superb century by Mike Hussey set up a 33-run victory for the Chennai Super Kings.

Ouch! If half full stadiums are a symptom of impending death, then Rees-Mogg should have checked out the attendance at the recent, tight, India-South Africa Test series; increasingly, Test cricket is not drawing full houses, with very rare exceptions, yet no one is -- and quite right, too -- writing the epitaph for the long form of the game just yet. Then there is the bit about T20 [and I am referring to the format, not to the IPL alone] not being a fit showcase for the varied skills the other two forms showcase. Strangely, this is precisely the argument that was advanced when the one day version was first introduced -- too compressed, too much of a batsman-showcase, no time for strategizing, no real narrative arc. Now, the fifty over game is assumed to have all of that -- because a tighter version has come up. Given the plethora of articles I have been reading on the IPL and related issues lately, I forget who made the point, but it was well made: T20 doesn't do away with the traditional cricket skills, it merely compresses the time frame, and hence puts an even greater premium on mistakes; thus, where a batsman could get away with an over-long mental paralysis, here he cannot afford to switch off for a single ball; bowlers who could 'bounce back' after bowling a bad over or three, now cannot afford to bowl a bad ball. Captaincy? You can, even in the fifty over game, give an over to a particular bowler, watch him get carted around the park, and still hope to reel things in; here, you make a mistake in the bowler you pick, the field you set, the line you plan in tandem with the bowler, and you are history. As Amit and Dileep have variously asked -- so what's wrong with that?

- Catching up with the league of notions