Two tracks ahead for Cancun climate talks. Which way will the world go?

This is the first of his despatches from Mexico: 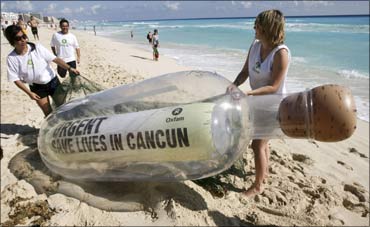 There should be 'something for everyone and something on everything' in Cancun, the United Kingdom-based think-tank, The Climate Group, stated in a briefing on the United Nations negotiations on climate change that began in this coastal Mexican city on Monday.

There are two parallel tracks which the current talks can take. One is the extension of the Kyoto Protocol, the first phase of which ends in 2012. This sets limits on the amounts of greenhouse gas emissions for industrial countries, and penalties for exceeding them.

There is the UN convention track which seeks to strengthen climate change efforts on the part of all countries.

Some $8.5 billion has been pledged by industrial countries, part of the $30 billion promised under the Copenhagen accord between this year and 2012, drawn up at the UN summit a year ago.

It is, however, unclear whether the accord which 130 countries -- accounting for 80 per cent of global warming gases -- have 'taken note of' and form part of the UN negotiations or should merely serve as high-level guidance.

The United States favours the first option and wants Kyoto scuttled. But it is doubtful whether it can deliver its own pledges to reduce its emissions by 17 per cent by 2020, as against 20 per cent by the European Union, given President Barack Obama's tangles with a Republican-led Congress.

The Climate Group recognises that India will put in place a carbon trading mechanism in April 2011 for achieving energy efficiency improvements in heavy industrial sectors and that it has launched the first phase of its national solar plan.

At the same time, neither India nor China are ready to convert national actions into international commitments.

"China is riding on two horses," Dr Saleem-ul Huq of the London-based International Institute of Environment & Development told journalists in Cancun. "It is exploiting its coal resources before Cancun and will catch everybody on the wrong foot post Cancun when it has invested heavily in environment-friendly technologies."

Groups are firming up their positions in Cancun. There is the G77 plus China, consisting of 130 countries, besides African countries and small island States, which are the most vulnerable.

Dr Huq warned that the so-called ALBA countries, consisting of Bolivia, Venezuela, Cuba and Nicaragua, might torpedo the UN summit. These countries had strongly opposed the Copenhagen accord, brokered by President Obama in the dying moments of the summit.

At the time, President Hugo Chavez of Venezuela had spoken glowingly of a new era ushered in by the accession of Obama -- in sharp contrast to the 'whiff of sulphur' he complained about regarding the presence of President George W Bush. This time, the Latin American bloc may not be so favourably disposed.

Their actions, Dr Huq feared, could force climate negotiators out of the UN to the G20 group of industrial and emerging economies.

Image: Activists of Oxfam carry a giant bottle on the shores of a beach in Cancun. The bottle contains a message reading 'Urgent: Save Lives in Cancun', in reference to millions of world's poorest people. 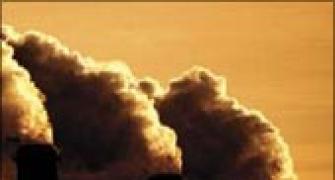 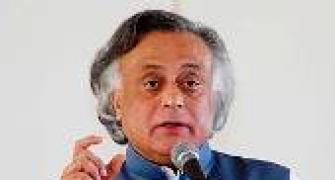 Climate talks: The story so far