News
Business
Movies
Sports
Cricket
Get Ahead
Money Tips
Shopping
Sign in  |  Create a Rediffmail account
Rediff.com  » Business » A Bolt out of the blue!

A Bolt out of the blue!

A long-time driver of SUVs from Tata Motors, Rajesh Karkera/Rediff.com steps on the gas with the Bolt, the new turbocharged petrol hatchback and comes away impressed.

One look at the new Tata Bolt’s exteriors and you will easily mistake it for the Tata Indica Vista, and may not give it a second glance.

But underneath the Indica Vista-like shell is where a new avatar is born. 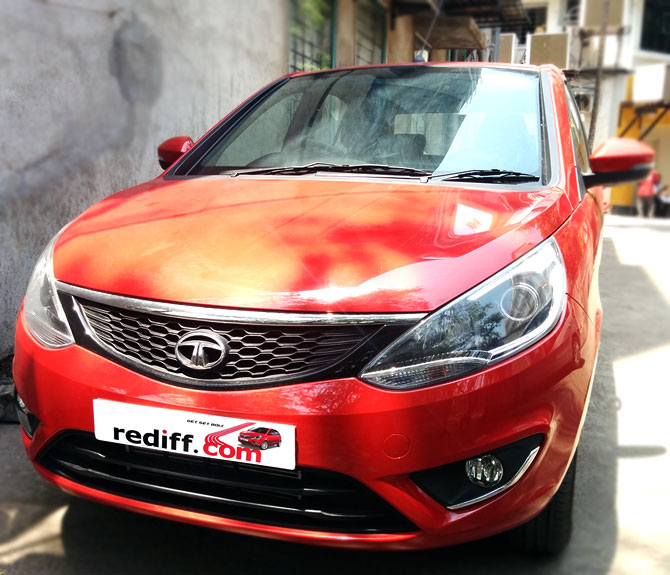 The stretched headlights and the chrome tipped grill plus the V shape cutting down into the bumper reminds us of the Indica Vista.

The stretched headlights and the chrome tipped grill plus the V-shape cutting down into the bumper remind one of the Indica Vista.

Enter the cabin and you are greeted by a very premium looking Java black-coloured spacious interior and a driving console that engulfs you with a variety of options available. You can’t not spend a good amount of time taking in the dashboard and going through the options available in the 5-inch infotainment screen. As well as the well detailed buttons below running all the way down till the end of the console.

As you look down you notice two buttons that are a little out of the ordinary, especially from the Tata stable, ‘Eco’ and ‘Sport’. 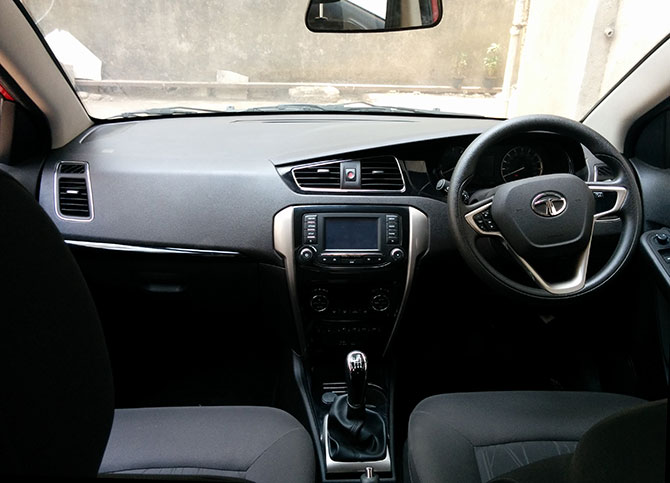 The spacious Java black interiors, with a premium look and the driving console attracts you with a variety of options.

Now having seen all the print ads and commercials about the new revolutionary ‘multi-drive’ feature of this petrol-driven variant, one does wonder what exactly is this, a petrol engine from the Tatas is not something one looks forward to, it’s the diesels they make great products from, the bulky kings of the road I call them. Not petrol, definitely.

Naturally, reading about the ‘turbo-charged’ petrol engine, a first in India, made me curious. Of course, it didn’t take me long to say ‘yes’ for the test drive. 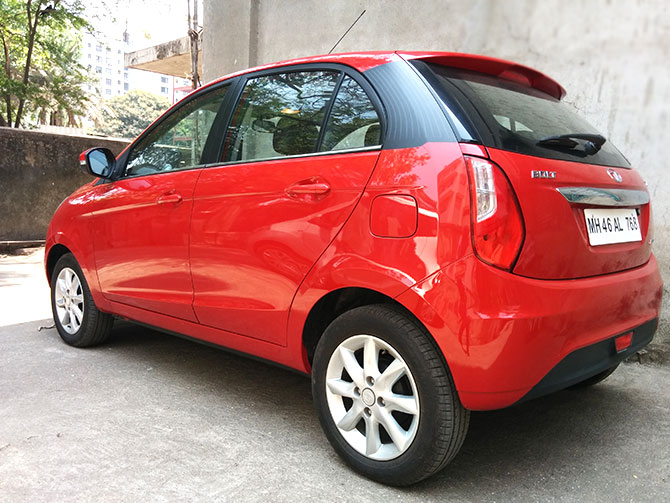 The black C pillar is a nice premium touch but it fails to make the roof look like a floating one as it is positioned to match the rear rather than the side glass.

I have been a long-time driver and fan of the turbo-charged diesel monsters from the Tata stable, and a petrol-charged multi-drive engine was a clear draw. 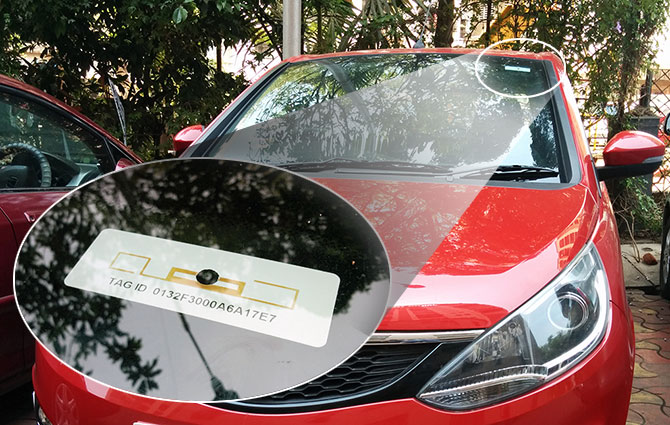 The sticker on the windscreen with a warning on it which says 'Do not remove' is actually an RFID (Radio Frequency Identification Device) tag which stores digital information for tracking purposes. It can be a plus point as well as a minus point.

Let me now take you through my drive and what I think of the car in 10 steps:

1. The key. At last, a key worthy of the Tata brand. Sleek, smooth and with a concealed insert.

2. A well-positioned, illuminated key hole that is clearly visible, unlike in other Tata cars where one has to hunt for it. 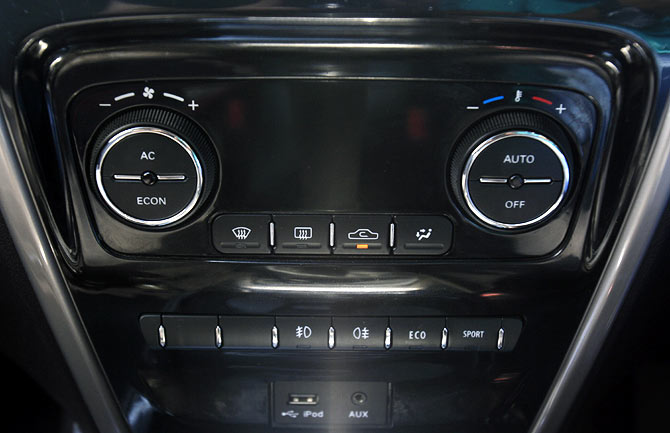 The premium-looking centre console with the climate-controlled AC and different modes of driving. Photograph: Hitesh Harisinghani/Rediff.com

3. The turn of the key that makes the car come alive, first purring like a satisfied kitten and then quietening down into near silence, making one wonder if the engine is running. A caress of the accelerator will assure you that there is power coursing through the sleek beast.

4. Once moving, it is pleasing to find such a responsive engine. It is here that you notice that the default multi-drive option is ‘City’, for city traffic conditions, as clarified on the speedometer console.

5. Switch over to ‘Eco’ mode and the car revs down and behaves itself, clearly saving fuel. Even if you floor the accelerator the car picks up speed slowly. Burning the rubber is not everything and the speedometer console lets you know how much fuel is being burnt. A small display at the centre bottom describing the 'Instant Fuel Economy’ makes my now economically minded self wonder:  ‘Wow, am I getting 30 kmpl?' If so, I can continue driving in this mode forever!

6. The euphoria mood passes, and I am dying to put the Bolt into ‘Sport’ mode. I do that at a small intersection and from a staid 40 kmph, and with my foot still pressed no deeper into the accelerator, the car bucks and leaps ahead. I quickly switch back to 'City' mode until I come upon a clear patch of highway, when I go back to ‘Sport’. And we are off again, what was once a calm pony is now a powerful but controlled stallion. The Bolt is clearly like one car with three personalities. The car’s low centre of gravity ensures there's no body roll at sharp turns. I have never seen such stability in another Tata vehicle -- or in other labels from this segment for that matter.

A driver's views of the Tata Bolt. Video: Hitesh Harisinghani/Rediff.com

7. Now for the other pleasures the car offers -- the back seat. I hand the wheel over to my colleague and slip into the back. I like it there, it provides great ride quality, the potholes making little difference to the experience. This is one rare small car that, besides being nearly silent, is spacious enough to offer sufficient legroom and comfortably house three people at the rear.

8. Ah, the features. This car is packed with tonnes of them. Besides the three driving modes, there are projector headlamps, an infotainment system with four Harman Kardon speakers and four separate tweeters that rock (though you could add a subwoofer in the rear for that added punch), and a 5" touch screen that accepts voice commands when you drive. There's also a navigation system that uses your cell phone only to start up and then leaves it alone, leaving you with no more data charges. And finally, there's the glove box, which can house up to six 500 ml bottles of water, three packets of chips and a separate, unseen rack for the owner’s manual and papers.

The rear seat can easily 3 adults as seen in the video above. Video: Hitesh Harisinghani/Rediff.com.

9. Now for the price for the tiny yet spacious monster in Mumbai from the base model onwards is:

I have listed only the petrol versions here since we were testing the turbocharged Revotron engine. 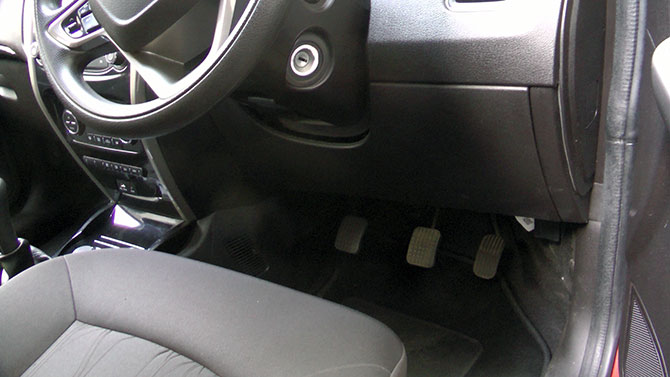 The left footrest is missed especially in heavy traffic.

Overall, the Indian customer's most important concern is long-term reliability, durability and after-sales service. Unfortunately, that only time will tell, but it is important to remember here that this is one area where previous Tata cars have failed -- on the quality of material used and in after-sales service.

While a great car, no doubt, this reputation can put a damper customer enthusiasm to buy what otherwise looks like a great product. 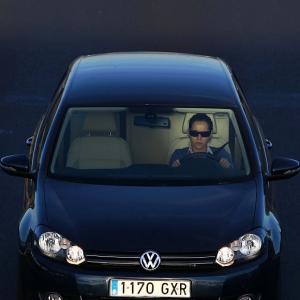 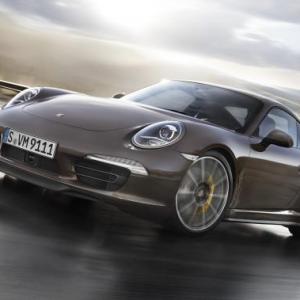