The new mining law, which provides for allotment of mines solely through auctions, may have sounded the death knell for its proposed steel plant Has Parliament passing the Mines and Minerals Development and Regulation (Amendment) Bill, 2015, known in short as the MMDR Act, shut the doors on Posco’s mega steel project in Odisha?

The amended portions of the MMDR Act provide for allotment of mines solely through auctions rather than the prevailing system of preferential allotment.

The South Korean company, lured to Odisha on the promise of allotment of iron mines on a preferential basis, is in no mood to go through the auction to secure iron ore, the principal raw material for its project.

It is not that Posco is averse to accessing iron ore through an auction.

But it is apprehensive, says a company insider, about being able to match the bids in a potentially stiff competition without pushing up the cost of the project substantially.

This, along with the company’s avowed stand on “no captive mine, no project”, has put the fate of the project under a cloud.

And it is doubly disappointing for the state and the steel company because they have already faced a decade of problems over land acquisition and allocation of a captive mine after the memorandum of understanding on the 12-million-tonne-per-annum steel project was signed in 2005.

No wonder, then, Odisha Steel and Mines Minister Prafulla Mallick reacted bitterly to Union Mines Minister Narendra Singh Tomar’s announcement of the auction process in February: “The Centre should accept the state’s recommendation for grant of a prospecting licence to Posco for the Khandadhar iron ore mine and fulfil its international commitment.

"Otherwise, the capacity of the state and the country to attract new investments will be affected. As the recommendation in favour of Posco was made in November last year, much before the ordinance on the auction of mines was promulgated on January 12, the Centre should spare the foreign investor from the bidding process."

On its part, the Centre felt that the documentation had not been complete.

A year earlier, the Odisha government had recommended that the Korean steel company be granted a prospecting licence after the Supreme Court upheld its 2009 decision, which had been challenged in the court.

The lease for 2,500 hectares (around 6,200 acres) in Khandadhar included both notified and non-notified areas.

After the Centre asked the state to submit separate proposals for the two areas, the state complied on the notified areas in November last year, but its proposal for the non-notified area didn’t reach the Centre before the promulgation of the ordinance.

Besides, the failure of the state government to renew the MoU with the South Korean firm, which expired in June 2010, has also weakened the state’s argument as the MoU was the basis for recommending the iron ore lease in favour of the company.

The state had announced that it would sign a tripartite agreement with Posco, but it is yet to be done.

The tripartite agreement, or a letter of intent assuring mining lease to Posco from the state to the Centre, before the promulgation of the ordinance could have saved Posco from going through the auction process.

Waking up to the situation now and keen not to let the setback be seen as the state government’s failure, Mallick says, “Posco will have to take part in the auction process as per the new law.

"But since we had committed to providing iron ore lease to set up its steel plant, we are currently negotiating with the Union government about how the matter can be resolved without violating the laws.”

Sings of winding up

Posco, however, is not too convinced. Its recent activities seem to indicate an exit.

Last month, Ho Chan Ryu, who was in charge of the Odisha project, was shifted back to South Korea.

The staff strength for the project, which once stood at 80, has been pruned to six. Officially, however, it denies that it is planning to withdraw from Odisha. “We are still on the project,” asserts I G Lee, spokesperson for Posco.

Significantly, the company has written to the Odisha Industrial Infrastructure Development Corporation (Idco) requesting refund of the money it had paid to acquire seven acres for peripheral activity.

It has also sent a letter to the authorities of the Paradip-Haridaspur rail link for refund from a special purpose vehicle for the rail project that was seen as crucial for carrying iron ore from the mines to the company’s project site.

Analysts see these as precursors to a withdrawal, but Lee counters by saying, “The request for refund is not for the steel plant land. It is for a plot we required for educational purposes near Paradip and the land is under litigation since 2006.

"And because of changed company laws, the SPV for the railway link cannot continue keeping the deposit.

"Because of this, we requested refund of the deposit. These cannot be construed as backing out of the steel project.”

Idco CMD Vishal Dev corroborates Lee. “Posco has not given any indication to us about pulling out from the project,” he says.

“It has only written to us on reconciliation of some money it had deposited as payment of compensation for some project-affected people”.

Posco has already paid for 545 acres of the 2,700 acres that Idco acquired for the first phase of the project.

P K Mishra, CEO of the rail SPV, adds, “We were unable to sign a shareholder’s agreement with Posco as the company did not have a prospecting licence or a mining lease in its name.

"Hence, it has asked for the refund of the Rs 27.5 crore that it paid as a partner in the SPV.”

Amid speculation of exit and denials, one thing is clear: if something urgent is not done to settle the issue of raw material, it could be a matter of time before Posco officially withdraws from Odisha.

With the hopes of Posco’s mega steel plant receding, the inhabitants of the area where the project was to be located are distraught.

With dreams of economic prosperity following in the wake of the project, the majority of people of Nuagaon, Gada Kujanga and a part of the Dhinkia panchayat, comprising Gobindpur village, had lent their support to the Korean company.

“We gave them our betel vines and other assets, which were our main source of livelihood, to facilitate land acquisition for the project,” says Tamil Pradhan, a resident of Nuagaon.

In the course of the land acquisition, the government had demolished over 1,000 betel vines and paid compensation to the vine owners at the rate of Rs 11.5 lakh per acre.

The people who received the compensation have already spent that money.

About 3,000 labourers who earned their livelihood working in the betel cultivation were left with no other source of income.

“They were hoping there would be employment opportunities when the plant came up in the area,” says Pradhan.

“After waiting for so long, they are now completely frustrated.”

The people feel that if the Posco project does not take off, the government should allot the acquired land to some other industrial project.

POSCO: FROM HURDLE TO HURDLE 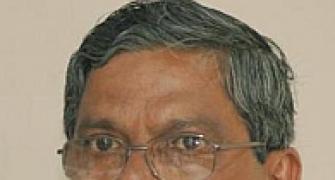 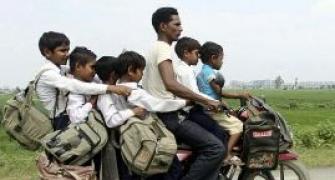 RBI is seen to cut rates by another 75 bps 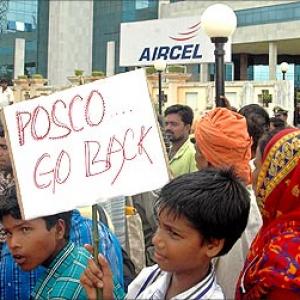 Posco faces another setback in India