News
Business
Movies
Sports
Cricket
Get Ahead
Money Tips
Shopping
Sign in  |  Create a Rediffmail account
Rediff.com  » Business » Remonetisation, albeit with a difference, has happened in Gujarat

Remonetisation, albeit with a difference, has happened in Gujarat

Workers who had gone to their hometowns and did not return for work after Diwali vacation owing to the demonetisation impact have now started trickling back to the industrial hubs in Gujarat, say Vimukt Dave & Sohini Das. 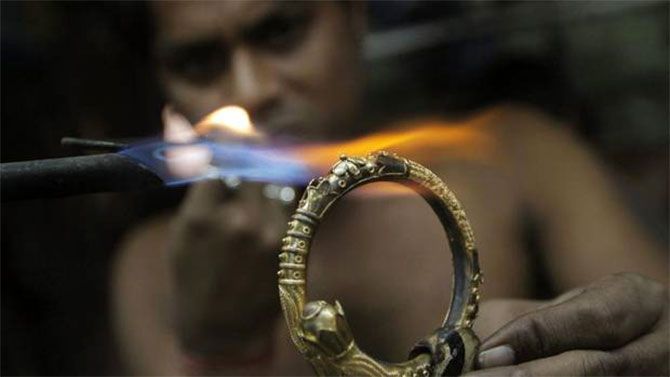 Image: Artisans from West Bengal have returned to their jobs in the gold jewellery sector. Photograph: Danish Siddiqui/Reuters

If not in ATMs in the country, remonetisation seems to have happened in industrial clusters of Gujarat.

Workers who had gone to their hometowns and did not return for work after Diwali (the festival was about a week before demonetisation on November 8) vacation owing to the demonetisation impact have now started trickling back to the industrial hubs in Gujarat.

Sample this: Almost all the diamond-polishing units in Surat are back into action, though at a lower capacity, with migrant labourers resuming work gradually.

Morbi, the world’s third-largest ceramic products cluster, too, has seen workers returning from their hometowns.

“After demonetisation, 30,000-35,000 workers had left the city (Morbi), but now they are coming back. Hardly 2,000-3,000 workers are in their home states. We hope they come back by the end of March,” said Nilesh Jetparia, president of the Morbi Ceramic Association.

The association is opening bank accounts of workers. It says more than 60,000 accounts have been opened so far, and the drive is on.

Artisans from West Bengal have returned to their jobs in the gold jewellery sector because the marriage season has brought back demand.

Bank accounts of almost 50 per cent of the workers in these clusters have been opened so far, according to industry sources.

The owner of a diamond-polishing unit in Surat said: “Almost all units are now back in action, just that they are operating at a 65-70 per cent capacity. There is still a cash crunch in the market, but things are definitely back into action.”

Most of the clusters like ceramics, brass parts and jewellery manufacturing in Saurashtra region of Gujarat had witnessed a huge reverse migration after the note ban created a cash shortage.

Wages, which were paid in cash as a result, could not be paid, and work had almost come to a standstill around December. Industry says while the cash crunch continues, work is getting back on track.

In Rajkot, a cluster of handmade gold and silver jewellery, artisans from West Bengal have started joining work from mid-January. Sandip Katrodia who booked the artisans for handmade crafting, said, “Good demand for the marriage season and availability of cash normalised things in the jewellery market in Rajkot.”

According to the Rajkot Jems and Jewellery Trade Association, the city employs around 45,000 artisans, of whom an estimated 25,000 are from West Bengal.

Things are slightly different in the Jamnagar cluster, where, while workers are keen to resume work and have started coming back from their hometowns, lack of demand is playing a spoilsport. According to the industry, demand is lower by 20-25 per cent. About 15,000 workers left Jamnagar after the currency ban, and only half have returned.