The back series of India’s GDP for the base year 2011-12 was released recently.

Notwithstanding the political controversy that followed, there is a lot of scientific inquiry that goes into the formulation of a new data series.

What exactly is a “back series” of gross domestic product? Why is the back series needed, and why it is important?

The gross domestic product (GDP) is one of the few broad indicators that describe a country’s economy.

In simple terms, it is a number that represents the measure of economic activity - or the value added - in India across all sectors.

Along with other indicators such as capital formation and consumption expenditure to name a few, we get what are called the “national accounts”.

The GDP always has a base year, which defines the composition of the economy in that year.

As the composition changes gradually, the base year needs to be revised after regular intervals.

For example, the share of CNG cars in the total number of cars in India was much less 10 years ago than it is today.

The same is the case with smartphones. To account for changes such as these, the base year needs to be revised at regular intervals.

Over time, the data used to measure the economy gets better, and newer and more accurate - and sometimes, real time - sources of data are available.

For example, for the manufacturing sector, survey data was the only source before, but up to date quarterly returns of companies are used today.

Every time a national accounts series gets revised to a new base year, better data potentially helps us to arrive at more accurate estimates of macro indicators.

Thus, this is the first time that the growth in the previous political regime can be compared with that in the current regime, using official data.

What does the recently released back series tell us about India’s economy?

But the back series has raised questions over this. It revises the average growth during the UPA (nine years) from 7.5 per cent to 6.7 per cent (the reason why Congress is unhappy with the data).

The average growth under the current government turns out to be 7.4 per cent, with the latest data available.

Apart from the political controversy, it tells us that changes in methodology have the potential to revise the data for previous years since the basic parameters get changed.

That said, this does not alter the future of the economy - it would not have any impact on investments, economic growth and job opportunities in the future.

What are the specific reasons for the revisions in past GDP data?

There have been a lot of changes in the primary data used, which has revised the data downward. Let us look at a couple of indicators.

The old series (base 2004-05) used two data sets to determine the economic activity in the organised sector apart from agriculture and mining: The Index of Industrial Production (IIP) and the Annual Survey of Industries (ASI).

The new series (base 2011-12) started using data presented by companies in their quarterly and annual returns.

What the back series did is that it used this very corporate data in addition to ASI and some extrapolation to measure economic activity in years prior to 2011-12.

Thus, a “different set of lenses” was used to look at the economy in the past, which incidentally showed that the actual economic activity was lesser than what the old method told us.

With regard to the trade sector, the old series used an indicator called Gross Trade Income index, which was devised in the year 1999-2000.

To make way for newer and better data, it was replaced by the sales tax data in 2011-12 revision, and was applied for all subsequent years.

This, the Central Statistics Office or the CSO says has nullified the over-estimation and now represents the real value added, and thus a more accurate representation of economic growth in that period.

Similarly, a host of surveys by the National Sample Survey Office (NSSO) are used to estimate value added in the informal sector.

These surveys generate original data on employment, the value added per worker, the size of a company/establishment, labour productivity, which are used to estimate sector-wise economic activity.

The older series had used surveys pertaining to the 2004-07 period to estimate GDP of subsequent years till 2013.

The back series uses newer surveys that pertain to the 2010-13 period, and taking this as basis, computes the economic activity in the previous years.

With these changes in the way economic activity was recorded the GDP was pushed downwards.

How do experts view this back series data?

Apart from the political criticism from the Congress, experts have said that this data needs a lot of deliberation.

In July, the National Statistical Commission had come out with a similar back series.

It had actually raised the growth rates in the UPA period upwards. That exercise was dismissed by the NITI Aayog vice chairman as “methodologically not the right thing to do”, and hailed the official back series.

State Bank of India research has pointed out that a lower estimate of GDP growth in years when investment rate, lending from banks and sales of vehicles was higher, signals that the capital was less efficient then, than it is now.

In simple terms, it means that a higher economic growth can be now achieved with lower credit and investment. 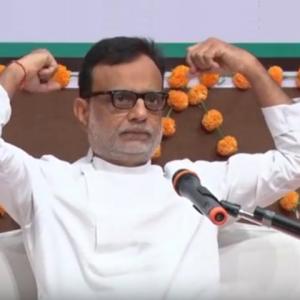