This is the second of his despatches from Mexico: 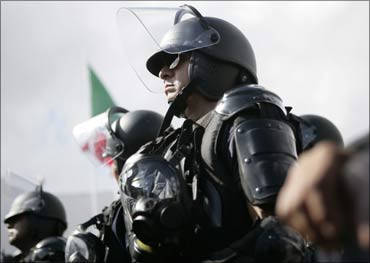 As debates at the UN climate summit warmed up on the second day, it became increasingly apparent to participants that industrial countries were resorting to sleight of hand in referring to 'new and additional' sources of funding for poor countries to combat climate change.

What is sometimes unofficially referred to as a new Green Fund will be an outcome of the Copenhagen accord.

As a paper released at Cancun by the University of Zurich and Brown University in the United States explains, there is no consensus yet as to baselines on which these commitments will be measured.

The authors of the study conclude: "We derive that a meaningful and successful baseline must at least fulfill the following criteria: novelty, additionality, equity, acceptability, transparency and consistency with other regimes."

It refers to the Monterrey, Mexico, pledge in 1970 that rich countries would provide 0.7 per cent of their GNP as aid, which has only been met by Scandinavian countries and the Netherlands.

It warns that while "official financial payments for developing countries have not reached more than $0.15 billion annually per each [development] treatythe potential for diversion of large amounts of development assistance did not exist."

That situation has now changed.

In response to a question as to whether governments' contributions to the climate fund would divert money from other development projects, an EU Commission spokesperson said: "In the long term, there would be building on ongoing programmes, but this would not jeopardize other projects. There is no common baseline for this new funding or definition of additionality. We don't want to spend two years on defining these concepts; we should be focused on delivery and transparency. Climate is a part of development."

The largest, Euro 5 million, is meant for mitigation technology and details how the German KfW bank is funding "Índo-German research co-operation in the field of innovative clean energy technologiesit is foreseen to finance eg research/testing facilities in the field of solar thermal energy and further renewable energies, as well as related capacity building measures".

Farah Kabir, country director of ActionAid Bangladesh, asked the EU spokespersons how the financing of banks to carry out such programmes could be considered part of a Green Fund. She was echoing the fears voiced by NGOs from the global South that such funds would not only be diversion of aid but also not a transparent process.

In particular, they question the role of multilateral institutions like the World Bank, which this year has administered an overwhelming proportion of global climate change funds.

Out of a total disbursement by such institutions as well as governments, which totalled $26.89 billion this year, the World Bank and its affiliates like the Global Environmental Facility accounted for as much as $9.21 billion, or almost a third.

The World Bank does not function democratically -- it is always headed by an American -- and critics like Greenpeace today alleged how it was subsidizing the logging of timber in tropical countries.

Image:  Police wearing anti-riot gear stand in formation near the venue of the climate talks in Cancun. 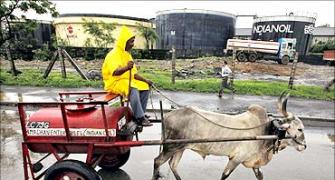 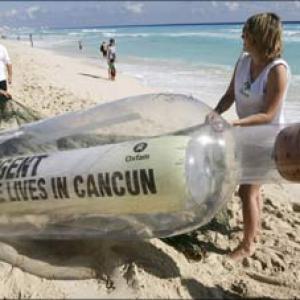