'History shows that links between corporate powerhouses and terror financing are not new.

'Nor are they restricted to industries such as cinema or real estate -- sectors that were slow to be classified as official business verticals and, hence, slow to get legitimate financing,' says Pavan Lall. The arrest of Humayun Merchant, a close aide of late gangster Muhammad Iqbal Memon, alias Iqbal Mirchi, by the Enforcement Directorate (ED), has once again turned the spotlight on the unholy nexus between the underworld and the powers that be.

Days before Merchant’s arrest and the confiscation of property involved in alleged money laundering, the ED had questioned former aviation minister Praful Patel.

Patel’s reality firm Millennium Developers allegedly built CeeJay House, a building in Worli (central Mumbai), with undeclared assets owned by Mirchi, who was one of the top associates of India’s public enemy No. 1 -- Dawood Ibrahim.

History shows that links between corporate powerhouses and terror financing are not new.

Nor are they restricted to industries such as cinema or real estate -- sectors that were slow to be classified as official business verticals and, hence, slow to get legitimate financing.

Aviation is another industry that has thrown up such allegedly dubious connections.

The now-grounded Jet Airways was once subjected to a multi-pronged scrutiny of the nature of its true ownership and sources of funding.

The speculation was that the Naresh Goyal-led airline was being funded by Dawood Ibrahim and his henchman, Chhota Shakeel.

The accusations could not be proved and while some cases were dismissed, others are still in court and Goyal remains under investigation by the Serious Fraud Investigation Office (SFIO) as well as income tax authorities.

Political and economic commentator Swaminathan Gurumurthy, who is also a part-time director at the Reserve Bank of India, says: “There is no doubt that there is high level of political involvement wherever terror financing is present.”

He goes on to say that there are several past examples of individuals and firms with links to criminal factions, and adds that companies have started crossing lines that they never did earlier and that this culture needed to change.

Whether it is the Colombian drug cartels, the Italian mafia, or what was once the underworld in Mumbai, the points of connection almost always involve the use of ‘black money’ and a few select industries.

Colonel Samrendra Mohan Kumar, co-founder of risk consultancy MitKat Advisory, says: “In India, these businesses or industries have historically been the film world, real estate and the aviation business.

"That is because in these industries the risk of failure is high and liquid cash is required more often,” Kumar says.

“However, it isn’t 100 per cent successful and more needs to be done,” he adds.

Her remarks came during the IMF’s annual meeting.

In March this year, the United Nation’s Security Council had called upon member States to stiffen the fight against the financing of terrorists and their activities and adopted a resolution on the issue under Chapter VII of the United Nations Charter.

When India had last updated the figures at the United Nations, the number of persons accused of terrorist financing and the number of cases under investigation were 470 and 143 respectively as of 2013.

The number of people convicted stood at a mere five. 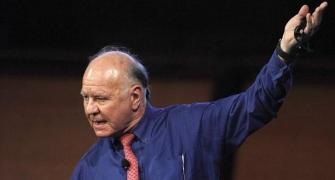