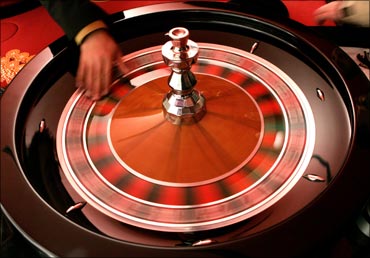 Image: India is not the only country trying to tap into the growing gambling industry.
Photographs: Reuters

Until now all casino aficionados in India had to travel to destinations like Singapore, Hong Kong, Macau or Kathmandu for the thrill of live gaming, but now with a casino coming up in Gangtok, they will not have to travel far to try their luck.

A full-fledged on-shore casino, the first of its kind in India, is spread over 48 acres of five-star property and the casino will have an almost entire gamut of live games - roulette, black jack, baccarat, kitty, mini flush and poker.

Players will be charged Rs 500 as entry fee. There will be 150 dealers at the casino. India is not the only country trying to tap into the growing gambling industry.

Some cities are world-famous for their casinos and earn a substantial part of their revenue from gambling. Let us take a look at some cities where gambling is a serious business. 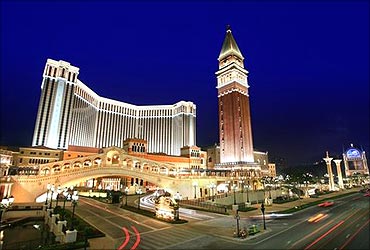 This special administrative region of China is already home to 33 casinos - including the world's largest casino in the Venetian Macau - and another two dozen casinos that are currently in the works.

Macau offers plenty of additional entertainment besides gambling such as shows and fine dining. Macau, which rakes in four times the revenue of Las Vegas, boasts many familiar gambling franchises: Wynn, The Venetian and MGM Grand.

Also, the Casino Lisboa is an Asian classic that has been dealing hands in Macau for 40 years. Macau is just an hour ferry ride away from Hong Kong. Image: Sin City is one of the top gambling destinations.

Sin City is one of the top gambling destinations in the world due to its large volume of casinos, entertainment and plush resorts.

Some of the fabulous hotel and casinos include the Bellagio, MGM Grand, Mandalay Bay, Harrah's, the Wynn, Excalibur, Paris, Caesars Palace and the Venetian.

But this is only a small sample of the casino resorts in Vegas. Other perks of Las Vegas include world-famous restaurants, critically acclaimed shows, family-oriented attractions and huge outlet malls. 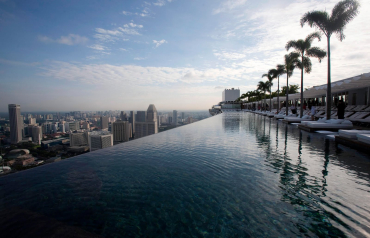 Image: Singapore is set to overtake Las Vegas in earnings.

The city-state is set to become the world's second-largest gambling hub in dollar value, with forecast earnings of $6.4 billion this year overtaking Las Vegas, which is projected to earn $6.2 billion.

Singapore's gaming market would likely overtake Las Vegas as the world's second-largest gaming centre as early as this year.

Singapore's two resort casinos earned $5.1 billion in less than a year of operation, with the Resort World Sentosa opening for business in February 2010 and the Marina Bay Sands two months later.

The two casinos have raked in $1.63 billion in earnings in the first quarter of this year. 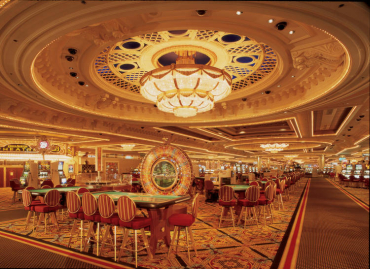 Image: Monte Carlo is a playground for the mega-rich.

Monte Carlo is located in Monaco - a playground for the mega-rich nestled between the French and Italian rivieras.

There is no better combination of breathtaking scenery and gambling than what Monte Carlo has to offer.

The hills of Monte Carlo provide gamblers with amazing views of the Mediterranean Sea.

Some of the casinos in this city are equally as impressive as the views since they offer visitors a nice mixture of class and entertainment.

Opened in 1863, the Monte Carlo Casino is as old school as it gets. Men are required to wear coats and ties. Women dress formal. 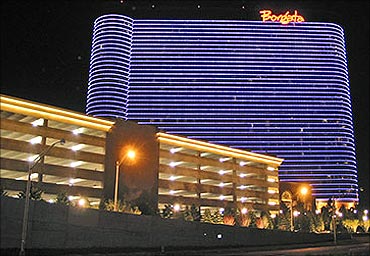 Though Atlantic City in New Jersey has struggled in recent years, it still offers many of the major hotels and casinos, including the Bellagio, the Wynn, Harrah's, Caesars Palace and the Borgata.

Visitors to Atlantic City love the boardwalk area and numerous shops throughout the city, too.

Visitors will also find some of the biggest names in entertainment performing in the various casinos in the city. 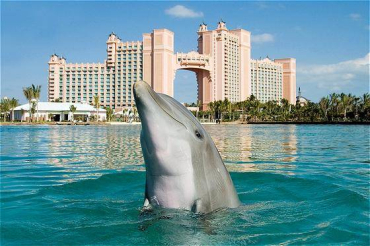 Nassau offers some pretty impressive views of the Caribbean Sea.

Of the casinos in Nassau, the Atlantis on nearby Paradise Island is a must-see with its infinite gambling opportunities, hot dance clubs and unique architecture.

Even if a visitor is not a serious gambler, Nassau is an excellent city to visit because of its beaches and golf courses alone. 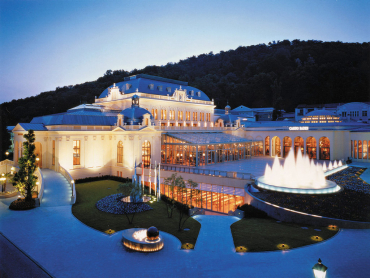 Image: Baden-Baden has an impressive casino.

The Black Forest of southern Germany is an unlikely place for world-class gambling, but in the old bath town of Baden-Baden gamblers wager euros inside the swank Casino Baden-Baden.

The casino has an aristocratic French air about it that is almost excessively opulent.

Red carpets, crystal chandeliers and gold mouldings contribute to make this one of the most attractive casinos on the planet. 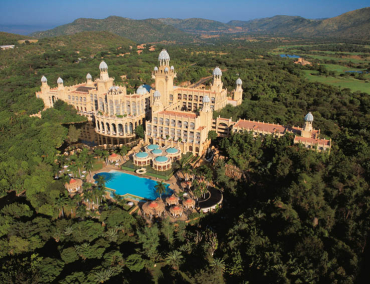 It the largest amusement facility in South Africa and the casino houses 40 gaming tables and 850 slot machines.

The resort has four hotels: Sun City Hotel; Cascades Hotel; The Cabanas and The Palace of the Lost City.

In addition to the four hotels, the complex includes time-share facilities called 'The Sun City Vacation Club', which is a popular self-catering facility. 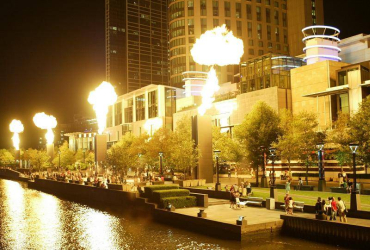 More than 80 per cent of adult Australians gamble. The country comes at 53rd in population, but number one in gaming machines.

The biggest casino in the country is the Crown Entertainment Complex in Melbourne, one of the world's largest, which claims to attract more than 12 million visitors a year.

Then there is Star City in Sydney, a gambling complex nearly the size of seven football fields and Conrad Treasury Casino in Brisbane, which occupies a Monte Carlo-style heritage building.