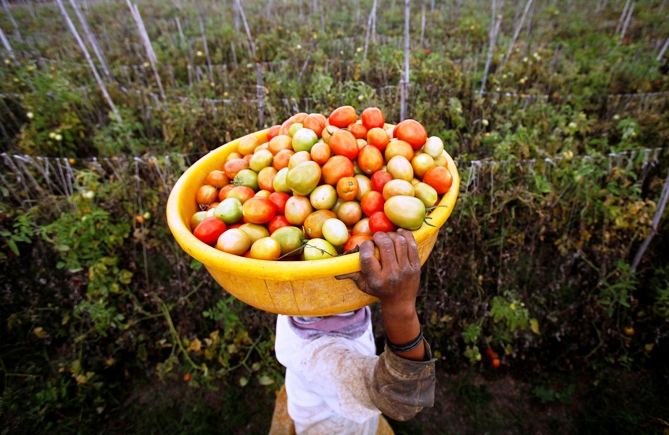 Image: A labourer carries harvested tomatoes in a basket on her head.
Photographs: Vivek Prakash/Reuters Sanjeeb Mukherjee in New Delhi

As on January 6, the prices of many vegetables had crashed as much as 50 per cent, compared with those a month ago, thanks to an increased supply following the arrival of winter crops in the markets.

High vegetable prices were seen as one of the key reasons for the debacle the ruling Congress party faced in four of the five Assembly elections concluded last month.

Vegetables, especially onions and tomatoes, had in November pushed the rate of wholesale inflation to a 14-month high of 7.52 per cent and the retail inflation rate to a record 11.24 per cent.

The prices, however, are now on a downward slope.

In Chennai, the wholesale price of tomato plunged 56 per cent from its December 6 level, while the retail one was down 57 per cent. 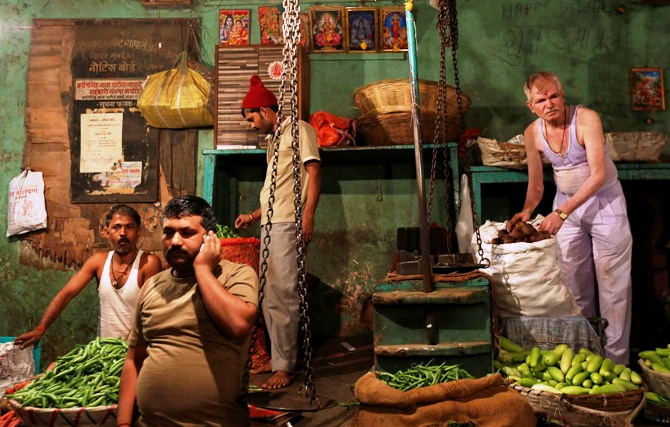 Image: Vendors arrange vegetables at their stalls at a wholesale market in Mumbai.
Photographs: Mansi Thapliyal/Reuters

Similarly, onions turned 50 per cent cheaper in the wholesale market of Chennai and Delhi’s retail markets during this period.

Vegetables like brinjals and ladies’ fingers, too, joined the slide.

According to data from Agmarket, the National Horticulture Board, traders and the Department of Consumer Affairs, the price of brinjal (round) plummeted 40 per cent in Delhi’s retail markets and 21 per cent in the wholesale markets of Delhi and Kolkata.

Ladies’ fingers prices fell 16 per cent in Mumbai’s wholesale market and 20 per cent in the retail markets of Delhi and Mumbai.

However, when compared with the same period of 2013 retail vegetable prices are still on the higher side. Image: A vendor selling vegetables waits for customers at his stall at a market in Mumbai.
Photographs: Danish Siddiqui/Reuters

For example, during the first week of January last year, onion in Delhi was around 14 per cent cheaper than now, while potato was almost 67 per cent less costly.

Vegetables have four production cycles in a year.

Ramesh Chand, director at the National Centre for Agriculture Economics and Policy Research, attributes the price fall to farmers’ response.

“The correction in prices is farmers’ reaction to high prices in the past few months. . . they have sown vegetables in wider areas,” he said. 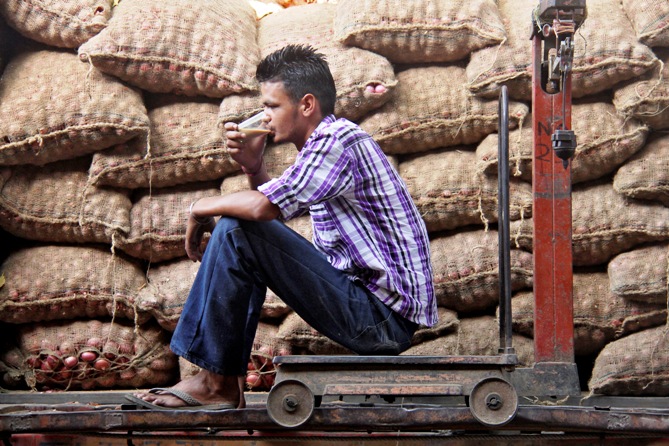 Image: A vendor drinks tea as he sits on a weighing scale besides stacked sacks of onions at a wholesale vegetable and fruit market in Chandigarh.
Photographs: Ajay Verma/Reuters

The sharp price correction has also justified Governor Raghuram Rajan’s decision to maintain the status quo on the repo rate in the Reserve Bank of India’s mid-quarter review of its monetary policy last month.

Rajan had refrained from raising policy rates due to the high inflation, especially in the food component.

The wholesale food inflation rate had ranged 18 per cent to 20 per cent between August and November.

Vegetable inflation during this period had been 80-95 per cent.

Rajan had said outlook on inflation remained uncertain and RBI’s stance would depend on more data on the price front.

Some economists now say Rajan might continue to hold rates or even go for a cut in his next monetary policy review, slated later this month.

“The fall in vegetable prices is a very positive sign for RBI as it prepares for the next monetary policy.

“A fall in retail inflation could compel RBI to either continue with the pause or attempt a rate cut,” Sabnavis said.

State Bank of India Chief Economic Advisor Soumya Kanti Ghosh, who has pegged the retail inflation rate to be in the range of 9-9.3 per cent and the wholesale one to fall to 6.5 per cent in December, expects RBI to hold rates. 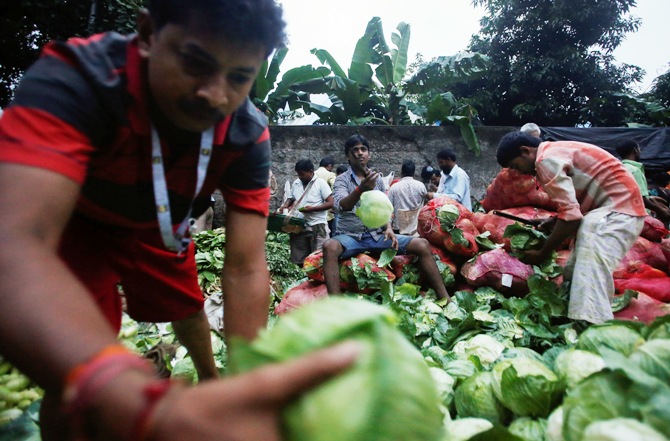 However, experts also sound a word of caution, as vegetable prices might start firming up from February.

“December and January are peak production time for vegetables and arrivals are in full steam.

“Also, crop damage is minimal because of cold weather.

“But this phenomenon is short-lived.

“Prices will start increasing around February, as we do not have any long-term policy to meet demand,” said P K Joshi, director (South Asia), International Food Policy Research Institute.