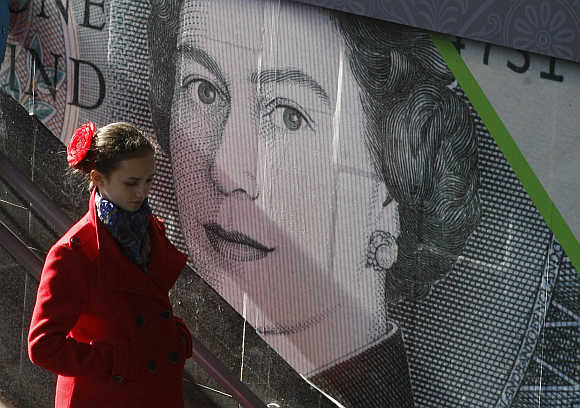 Image: A woman passes by an outdoor advert with an image of the British pound bank note in central Kiev, Ukraine.
Photographs: Anatolii Stepanov/Reuters

There are millions of currency notes of different sizes, colours and feel all across the world, but none of them actually look weird. However, there are some places where weird currencies have been used.

Let's take a look at some of the weird currencies. 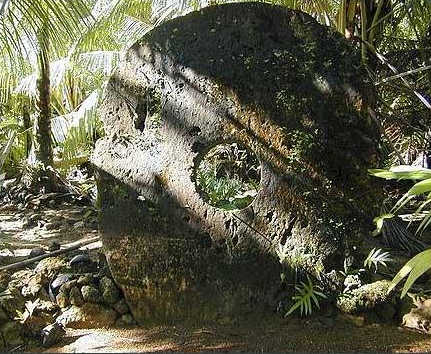 Image: A rai stone on the island of Yap in the Solomon Islands.
Photographs: Source: creditcards.com

On the island of Yap in the Solomon Islands, you'll find the world's largest and strangest form of currency: the rai stone. Forget pocket change: these limestone disks with the hole in the centre can run 12 feet in diameter and weight up to eight tonnes.

Because Yap lacks the proper limestone for rai stones, the villagers would risk their lives to paddle their ocean-going canoes to Palau, where they would carve these behemoths from a mountainside and row them back to the island.

"Part of the value is size, but the real value lies in what it took to get it there, the number of people who died bringing it back," says David Doty, who collect weird money from around the world.

As for its monetary use, the stones typically remain in place; only the ownership changes.

"Once it gets there, these things can't be moved, but everybody on the island knows who owns which stones, and transfer is done in a public ceremony," says Doty.

The Yap government has banned export of rai stones. One of the few on display resides in the lobby of the Bank of Canada in Ottawa. 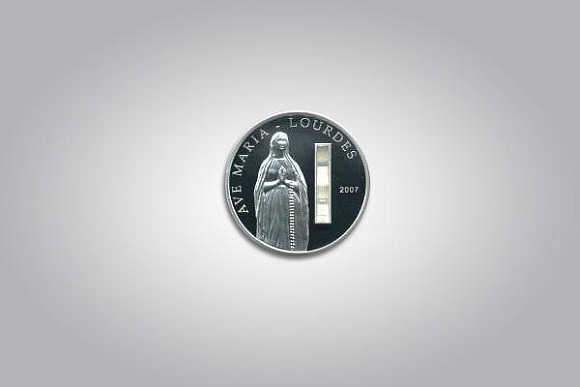 Taking "In God We Trust" one step further, the island nation of Palau issued a silver dollar coin in 2007 with the image of the Virgin Mary and a tiny vial containing holy water from the Grotto at Lourdes, France. The following year, it issued a second series to commemorate the 150th anniversary of the Apparitions of the Virgin Mary at the Grotto.

The holy water dollar was not the first coin to contain unconventional materials however. Palau also has issued coins with small pieces of mother of pearl and meteorites embedded in them. The Cook Islands topped that when it commemorated the invention of the television by embedding an actual moving video clip of its inventor, J L Baird, within the world's tiniest flat-screen TV. 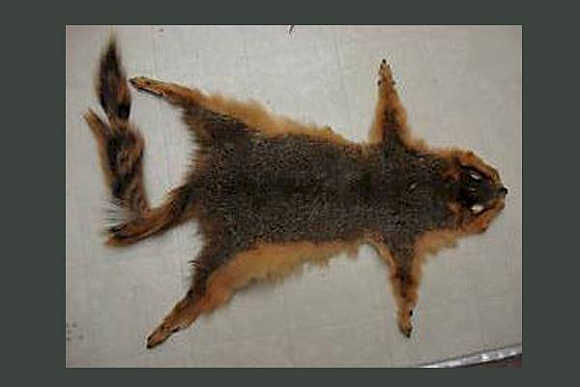 In medieval Russia, squirrel pelts were a common currency of exchange. So common, in fact, that snouts, claws and ears were also used, presumably as change.

Doty speculates that converting squirrels into spending cash may have had an unexpected benefit as well: "During the Black Plague, Russia didn't get hit as hard as everybody else. By making their currency the squirrel pelt, it may have reduced the number of disease-bearing parasites". 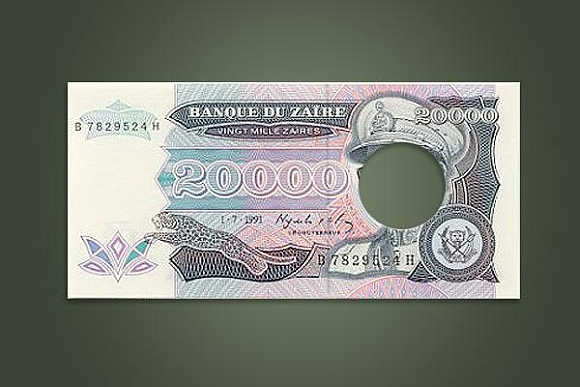 Off with his head

The African nation of Zaire, known today as the Democratic Republic of the Congo, doesn't have money to burn. So when the totalitarian regime of Joseph Mobutu was overthrown in 1997, the new government found itself in a cash crunch until it could design and print new currency.

It took large stacks of 20,000-zaire notes and simply punched out Mobutu's image. 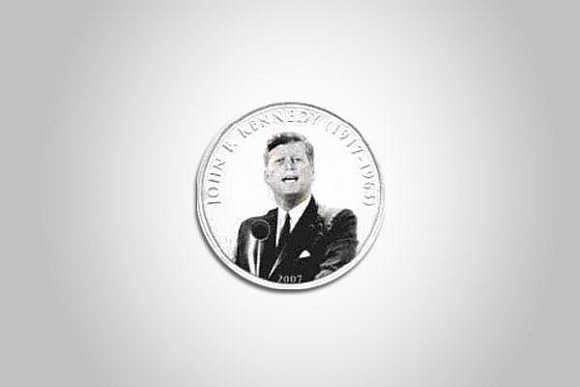 Image: There was a tiny button on JFK's chest playing his famous speech.
Photographs: Source: creditcards.com

What must the yak-herding descendants of Genghis Kahn have thought when they first encountered the 2007 Mongolian 500 Tugrik coin, flipped it over and discovered President John F Kennedy on the tails side? Much less when they pressed a tiny button on JFK's chest and heard an actual sound bite from his famous "Ich bin ein Berliner" speech?

Chances are we'll never know, since collectors quickly snatched up most of the oddities, which may have been the sole reason for printing them in the first place. 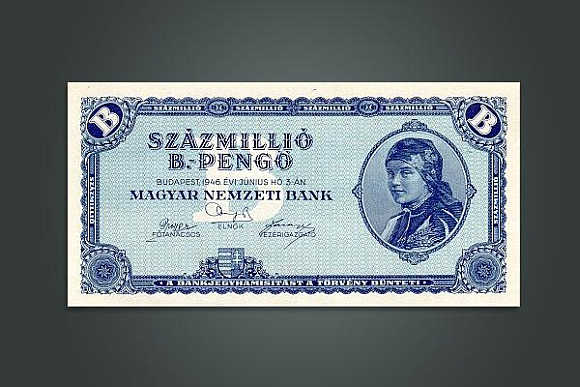 It was worth about 20 cents US. 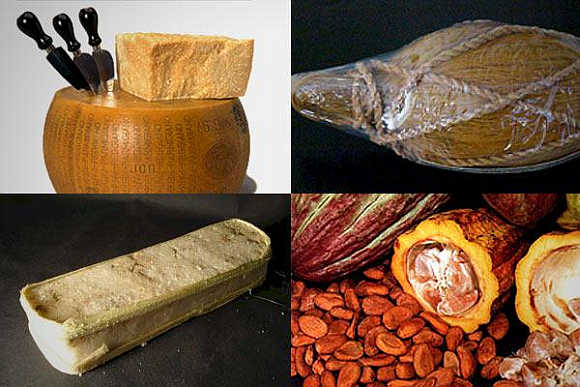 Image: There have been some edible currencies, too.
Photographs: Source: creditcards.com

Salt is one of the world's oldest forms of payment. In fact, the word salary derives from the Latin "salarium", which was the money paid to Roman soldiers to buy salt. It was the main form of currency in the Sahara Desert during the Middle Ages, and was used extensively throughout East Africa. Typically, one would lick a salt block to make sure it was real and break off pieces to make change.

Other incredible, edible currencies include "reng", a yarn-ball of tumeric spice wrapped in coconut fibers that is used for trade in the Solomon Islands; cacao (or chocolate beans), widely used throughout Mexico and Central America; and Parmigiano Reggiano cheese, so highly regarded that it was used both as currency and bank collateral in Italy.

One particularly inedible currency: the poisonous money seeds of Burma. Which if nothing else proves that money does indeed grow on trees - or at least bushes. 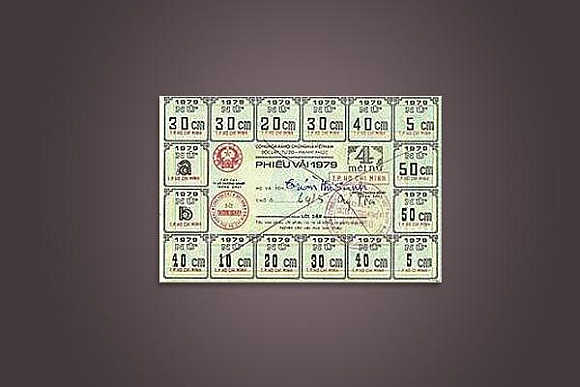 We normally think of money as fully fungible, meaning it is interchangeable for like value of all goods and services. But this is by no means universal. In some cultures, certain currencies can only purchase certain things, such as a bride or raw land.

This Vietnamese bill is one such example. It operated like the old Green Stamp coupon book. "Around the edges are a bunch of perforated coupons that you would tear off to buy pieces of clothing; you would tear one off for a shirt or a pair of pants," says Doty. "It literally was denominated in clothing." 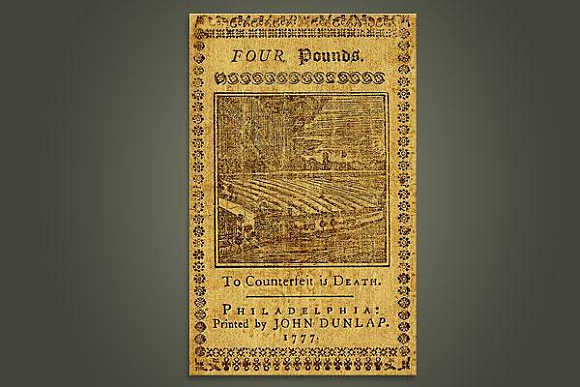 The US dollar has grown into one of the world's most stable currencies, but such wasn't always the case. In fact, before it could grow in value, it had to rein in counterfeiting.

"When the colonies first started, it was pretty easy to pr#8747 there were a lot of printers, money wasn't very sophisticated and there just wasn't a lot of anti-counterfeiting," says Doty.

"So how to you create artificial scarcity? You print on the money, 'To counterfeit is death'. All 13 colonies printed this on all of their money, which was eventually replaced by 'In God We Trust.' Before we had 'In God We Trust,' it was actually in the death penalty we trust." 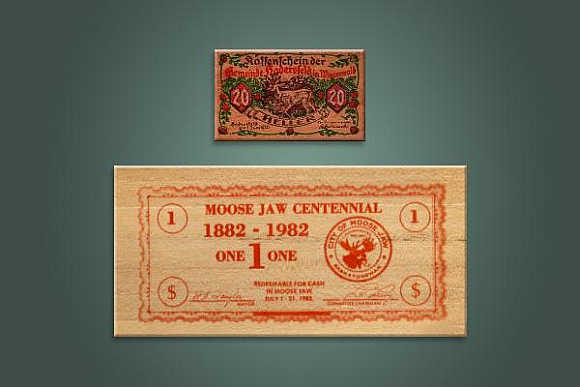 Image: Wooden bills were one of the ingenious ways Germans devised to rebuild their economy.
Photographs: Source: creditcards.com

Wooden bills may have been rough on the wallet, but they were one of the ingenious ways that Germans devised to rebuild their economy following World War I. When the war settlement left the German economy in shambles, local townships took to printing "notgeld" (or "emergency money") on everything from wood and aluminium foil to silk linens and playing cards as a local form of payment until the Reichsbank recovered.

"What they realised was that collectors would buy up really odd money for collections, which essentially took it out of circulation and returned hard currency in its place," says Doty. His collection also includes a coin stamped on anthracite coal, a rarity now because, once Germany recovered, notgeld coal coins became more valuable as fuel.