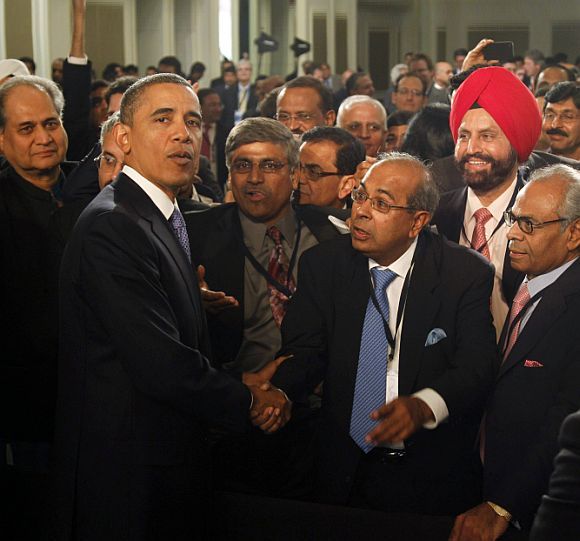 Few years back, US was supporting India to become an economic superpower. But things went wrong between the two since India started witnessing economic slowdown. Second generation Indian-American policy wonks assess where both countries are falling short.

A report co-authored by second generation Indian Americans - rising stars in the policy wonk world of Washington, DC - has taken a pessimistic view of the United States-India relationship, owing to the problems with economic and trade ties between the countries.

Dhume, the report’s lead author, tells India Abroad, “The timing of the report is somewhat fortuitous. We embarked upon this research two years ago, when the US-India economic relationship looked robust, but during the course of our writing India’s economy slowed drastically and several business differences arose between the two countries.”

He adds, “Both Democrats and Republicans back India’s rise, but a strategic partnership built on weak foundations will likely flounder.”

According to the report, US–India relations stand at a crossroads. Not so long ago, many in Washington viewed the signing of the historic US-India civil nuclear deal as the advent of a dynamic partnership with the potential to transform Asia and the world. Today US-India ties are just as often characterised as unrealistic or oversold. 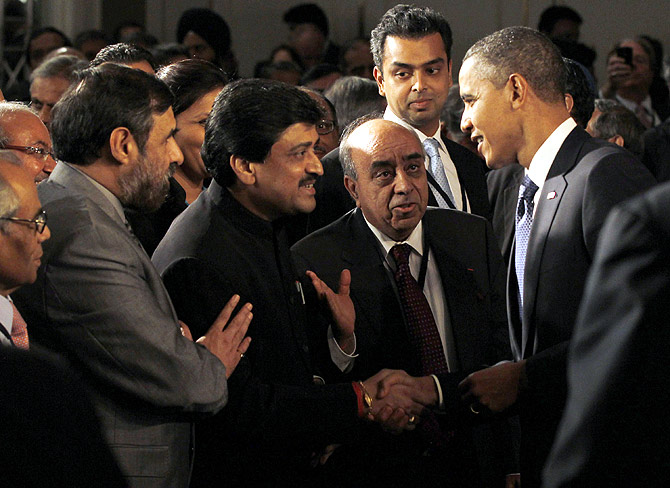 The report acknowledges that successive American and Indian administrations have ‘chipped away at the mistrust that once characterised’ the relationship.

They talk to each other more often, about more things - engaged in more than 30 dialogues discussing everything from Afghanistan and counter-terrorism to vocational education and clean cookstoves - and at higher levels than ever before.

Republicans and Democrats alike generally agree that the goal of a strong India - as a symbol of democratic capitalism, an implicit counterweight to Chinese hegemony, an ally in the long war against radical Islam, and an engine of global growth - remains worth supporting, the report notes.

The United States also views stronger ties with India as an essential part of its ‘rebalance’ toward Asia.

But, for all this talk and public declarations, ‘a strategic partnership built on weak foundations will likely flounder… Economic and trade ties, which ought to be the lifeblood of a US-India partnership, have traditionally played second fiddle to strategic considerations and remain far below potential’, according to the report. 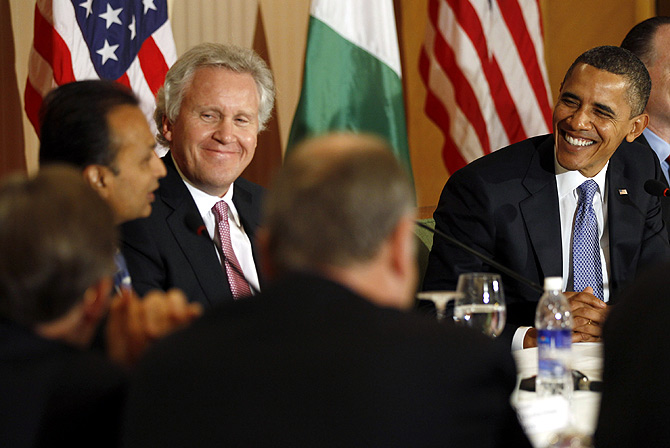 Since 2004, the share of the United States in India’s total trade has fallen, as has the US share of foreign direct investment inflows to India… Simply put, neither country treats the other as a trade priority in Asia, states the report.

The report cites how many firms route their investments to India through the tax haven of Mauritius due to the lack of progress on a bilateral investment treaty as well as the disputes regarding potential US restrictions on services trade and Indian policies on intellectual property rights, preferential market access, and taxation have roiled the relationship.

It does not help that over the past 18 months, India’s economic growth has plunged to 4 per cent per year, the lowest level in a decade. Dhume tells India Abroad, “Slowing growth raises questions about whether India will live up to some of the forecasts that have underpinned its rise to strategic prominence in Washington.”

These forecasts include the National Intelligence Council’s estimate that by 2030 India will be the largest driver of middle-class growth and surpass China in economic dynamism. And also the Organisation for Economic Co-operation and Development’s prediction that by 2060 India will account for 18 per cent of global economic output.

Both predictions ‘hinge on sustained high growth’ the authors point out.

Shah tells India Abroad, “Though the logic of a closer US-India relationship may seem self-evident, and progress toward it inexorable, reality does not always match rhetoric. Simply put, the two countries are yet to establish economic ties worthy of their combined gross domestic product of over $20 trillion in PPP terms.”

She adds, “The key to fulfilling the strategic potential of the US-India relationship is to foster a vibrant, entrepreneurial Indian economy linked to America by ideas, capital, people, and technology.”

For the US, the report notes, “this means remaining true to its own principles of economic freedom when it comes to issues such as services trade, liquefied natural gas exports, and the expansion of multilateral trading regimes. Washington should also recognise the shifting shape of India’s polity by stepping up engagement with India’s best-performing state governments.”

For India, it says, this means, “the firm repudiation of anti-market measures that have soured both foreign and domestic investors and a renewed commitment to the incomplete task of economic reform, prioritising the negotiation of a high-quality bilateral investment treaty, improving protection for intellectual property rights, and improving conditions for manufacturing and taxation policy.

Mathur tells India Abroad, “India’s growth story has been and will always be about India’s entrepreneurs.” 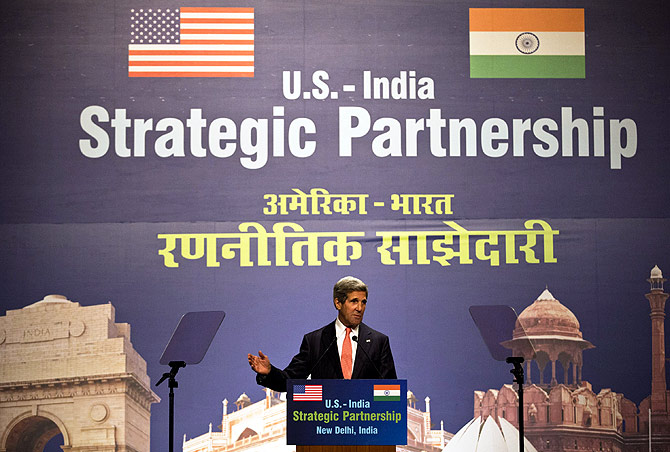 Denying them an environment to do business will be detrimental to India’s rise since it has been the private sector and the entrepreneurs who have been the catalyst behind India’s prominence globally.

“All they want is a reasonable business environment with minimal corruption and red tape, and they will thrive. It’s time we listened to them,” says Mathur.

The report urges both Washington and New Delhi ‘to prevent temporary hiccups from derailing what ought to be a deep economic and strategic convergence.’

The authors also warn, “Time is not on India’s side. After nearly a decade of stuttering reforms, both foreign and domestic investors are looking at India with greater scepticism than at any time since the onset of liberalisation in 1991… Whoever is elected to run India after next year’s general elections will have their work cut out for them. The country, which already lags most of East Asia in terms of both income and human development, can scarcely afford to slip behind further. If growth continues to stall, it will jeopardise both the US–India strategic partnership and India’s rise as a global power.” 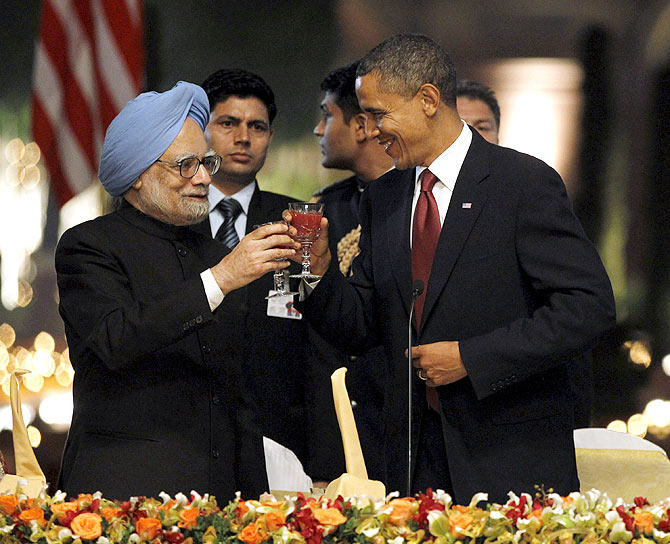 Recommendations for the United States

Liquefied Natural Gas Exports: Liberalise LNG export guidelines to allow exports to India - and other non-Free Trade Agreement countries - on a routine rather than case-by-case basis.

Focus on States: Recognise a trend toward greater federalism in the Indian economy and deepen relations with the fastest-industrialising states.

Bilateral Investment Treaty: Negotiate a high-quality BIT as a stepping-stone toward a free trade agreement. 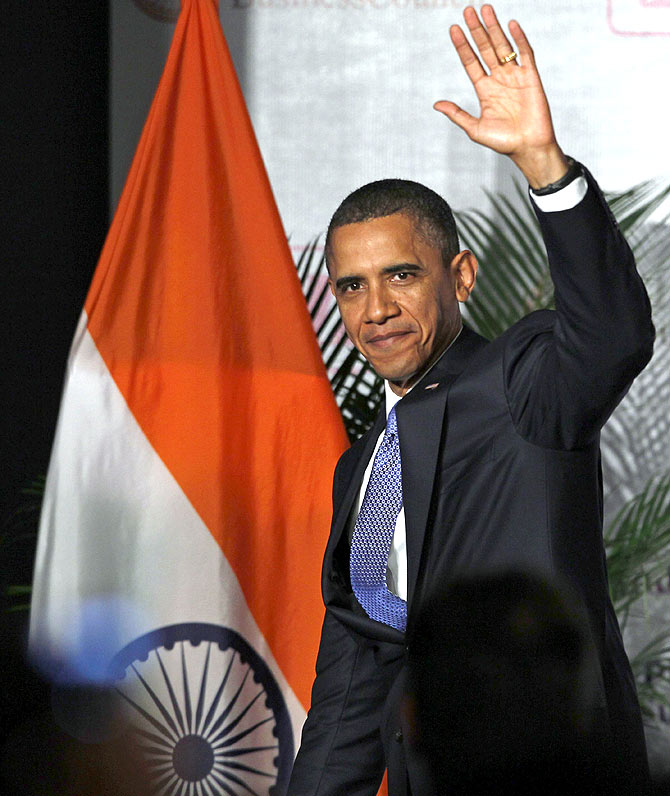 Bilateral Investment Treaty: Negotiate a high-quality BIT as a stepping-stone toward an FTA.

“We cannot overstress the importance of commencing nuclear commerce, an unfulfilled promise of the 2008 US-India nuclear deal, to restore trust in India among Washington policymakers,” the authors said.