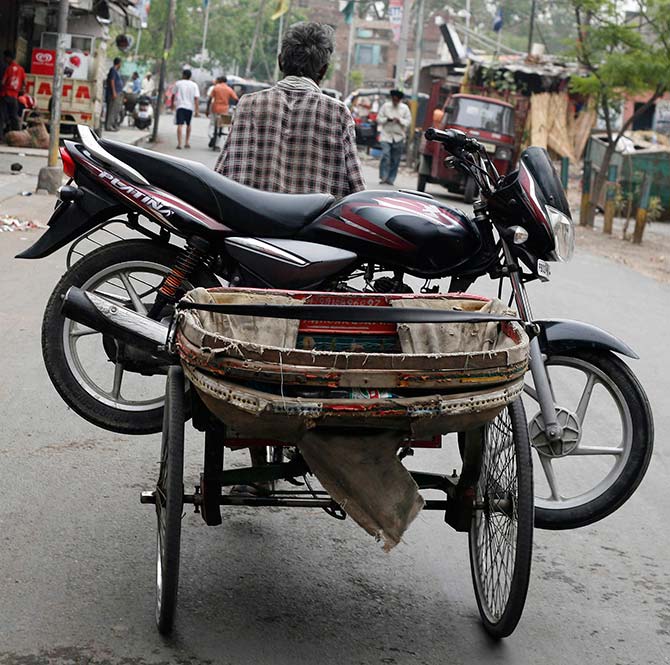 Despite its sincere tone in describing the gravity of the economic situation, the Budget broke little new ground or displayed initiatives that would have fired our imagination, says Shreekant Sambrani.

I would have found it difficult to believe the Budget tabled in the Lok Sabha on Thursday, July 10 2014, was the work of the new government in office, had I listened to the finance minister’s speech on the radio instead of watching it on the television.

It had all the usual ingredients – statements of concern for the economy, the poor, inflation, smattering of new schemes, tinkering with tax proposals.

In the last several years, these had first induced yawns, and then led to disaster.  I hasten to add my sincere hope that the last consequence does not come true.

The gathering economic crisis under the previous United Progressive Alliance (UPA) governments and its Congress finance ministers led to the spectacular electoral victory of the Bharatiya Janata Party (BJP) and the National Democratic Alliance (NDA).

Its leader and now the prime minister, Narendra Modi, lost no opportunity to highlight the economic mess in his long campaign.

The BJP manifesto listed many new ideas in its manifesto, which promised achchhe din (happy days).  No one expected them to arrive soon, but everyone thought that some pre-dawn light could be visible even at this early stage. 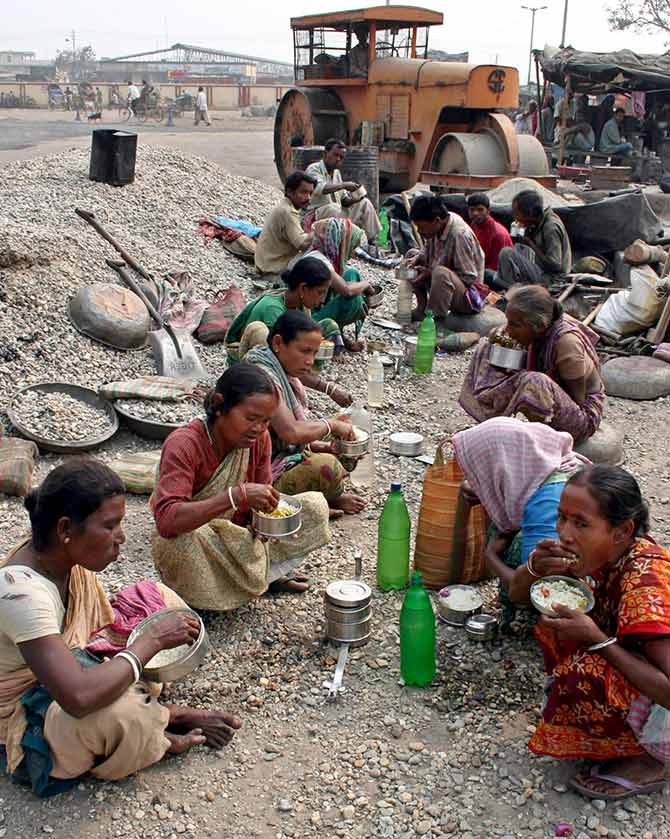 So the expectation was that there would be some striking departures from the old pattern in the first Budget itself, especially since it was to be formulated by the otherwise astute Arun Jaitley, the prime minister’s supposed Chanakya.

In the event, the Budget turned out to be, as the former chief economic adviser to the government Nitin Desai put it, as one that could have been prepared by Lalu Prasad.

Despite its sincere tone in describing the gravity of the economic situation, the Budget broke little new ground or displayed initiatives that would have fired our imagination.  Instead, it promised more of the same, under possibly different headings.

The speech began refreshingly enough.  Jaitley displayed welcome candour in admitting the challenges and then reaffirming his resolve to meet them boldly.

He said meeting the fiscal deficit target of 4.1 per cent of the GDP set by his predecessor P Chidambaram would be a tough ask given the slowdown resulting in lower tax revenues on the one hand and mounting requirements of poorly targetted subsidies and the development spending needed to restore growth.

The impending threat of El Niño affecting agriculture and continuing concerns about inflation were further complications.

Jaitley vowed that he would take this on and committed that the deficit would be further reduced to 3.6 and 3.0 per cent respectively in the coming two years.  Towards this end, he proposed a commission to rationalise government expenditure, which would report later in the year. 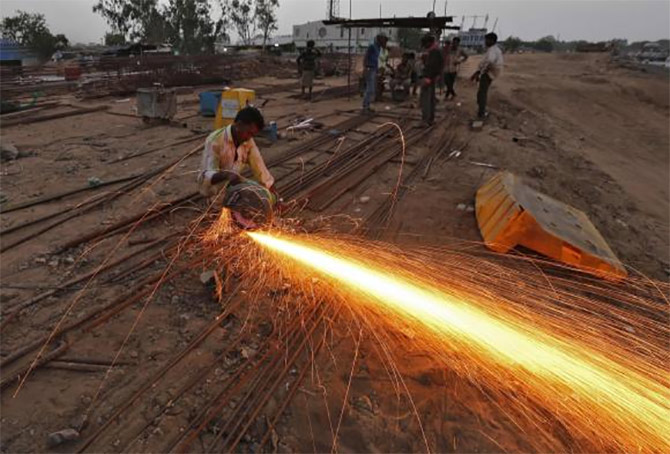 He neither blamed the UPA for the 2012 retrospective tax amendment nor repealed it.

Instead, he committed not to resort to it without a thorough review and analysis, and following the arbitration presently underway in the Vodafone dispute.  Though falling short of the expectation of investors, they were soothing words nevertheless.

He also said that the goods and services tax cannot be delayed any further, even as the legitimate concerns of the states needed to be addressed.  He added that the direct tax code which had lapsed with the dissolution of the last Lok Sabha would be revived.

He proposed on the whole an easier and friendlier tax regime, distancing it from the terror tag he had used in the campaign.

The minister then unveiled the government’s plans to allow and raise the extent of foreign direct investment in various enterprises, including defence equipment manufacturing and insurance.

He reiterated that despite this, Indian control would be retained.  He also proposed that the additional capital requirements of the banking sector would be met with public investment in their shares, leaving intact government control.

I thought that all this was an adroit act of tight-rope walking.  So did the share market; the Sensex had gained over 100 points by then.  The investor confidence was at a high. 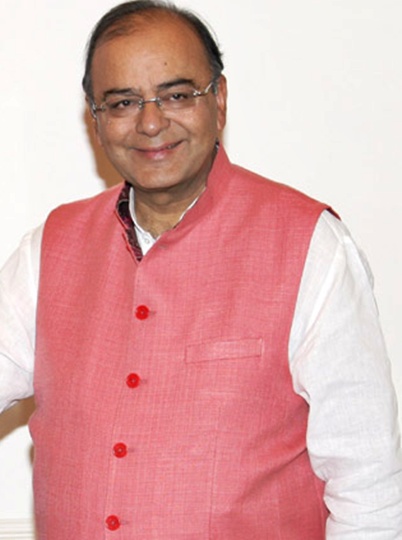 But that did not last long.  Even as Jaitley did not mention specifics, he said that the Mahatma Gandhi National Rural Employment Guarantee Scheme, lately the subject of much criticism for its leakages, would continue, albeit with stress on creating assets.

He did not elaborate, nor did he say how subsidies on fuel, food and fertiliser would be better targetted.

Any item anyone could think of found its place in the list.  And yes, the Sardar Patel statue, beautification of river ghats and a war memorial also figured.  They received allocations ranging between Rs 500 million and Rs 5 billion.

The river linking project, which was one of the highlights of the BJP manifesto, received Rs 1 billion.  Just two days ago, we had heard another major campaign plank, the bullet train diamond, also receive the same allotment in the railway budget.

The two other exciting items on the BJP agenda, the Sagar Mala string of ports and the integrated Himalaya development plan, also got similar amounts. 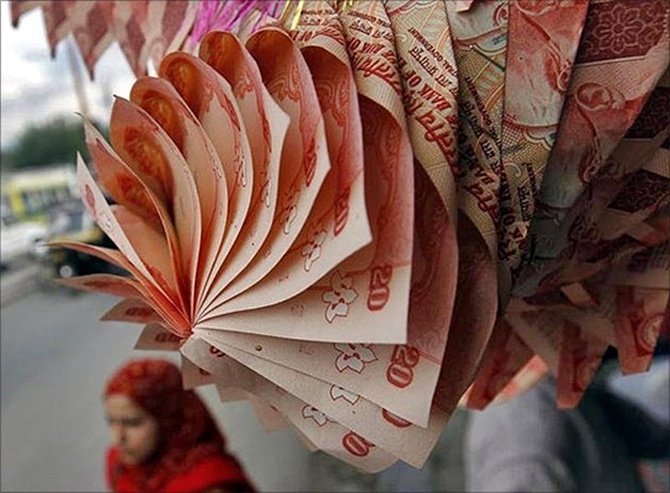 Two programmes got substantial allocations: Rs 370 billion for national highways and Rs 20 billion for the Ganga cleanup.  These were expected, since the original NDA claim to fame was its Golden Quadrilateral project in 2001-2004 and the prime minister’s commitment to cleaning up our most revered river.

Yet one cannot be faulted for entertaining questions about what happened to the untold billions spent on this project in the last 25 years.

The point is not that all these activities can be taken up in full earnest all at once.  Nevertheless, making such small commitments to a whole host of them, each of which would cost trillions, smacks of mere tokenism.

It also reminded me of Pranab Mukherjee generously earmarking Rs 3 billion each to dozens of agricultural initiatives in his Budgets in 2011 and 2012.  It would be instructive to learn what became of them (not much, I suspect).  The current Budget also carried on this tradition, with its own set of schemes.

This approach reminded me of the practice followed at public Ganesh pandals in Maharashtra.  Everyone attending the daily aarti get a pinch of sweetened dry coconut as prasad. 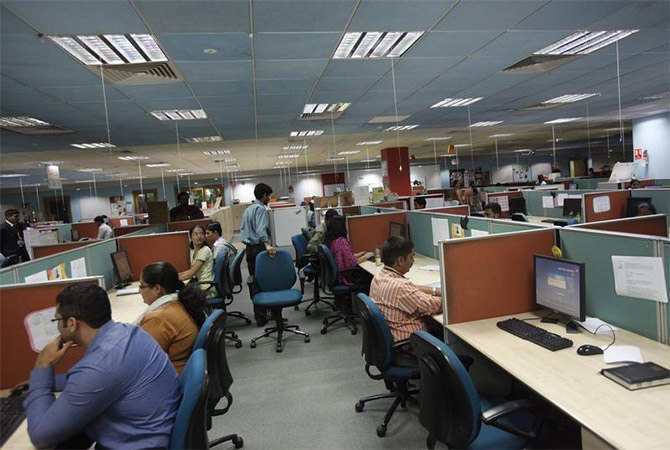 The organisers, lacking the means to provide anything more substantial, hope that the devotees would be satisfied by the token gesture. All through this period, the Sensex wobbled, declining at one time by as much as 300 points.

On personal taxation, the exemption limits were raised by Rs 50,000 for all taxpayers, with further raising of limits for investments in select schemes under Section 80 C as well public provident fund.  That was welcome relief, but entirely due in view of the erosion of the value of the rupee.

Elsewhere, the finance minister continued the tinkering of excise and customs duties.  Not too long ago, Chidambaram had shown exemplary rectitude in creating just three slabs of indirect tax rates.  That practice was soon compromised by specific exemptions and enhancements.  And in a fit example of Gresham’s law of a bad coin replacing the good one, it continues into this budget as well.

Could this have been any different?  Two possibilities occur to me immediately.

First, we have long debated the utility of direct benefit transfer of subsidies.  On paper, it has the merit of reducing the wastage presently incurred, and cutting the expenditure substantially.

Surjeet Bhalla and Ashok Gulati have recently demonstrated how this could be done and the extent of savings in case of flagship programmes of the previous government such as the employment guarantee and food security.  Since the Aadhar card scheme now covers more than half of the population and Modi has indicated that the government does not intend to scrap it, a beginning could have been made right this year.

That would have demonstrated the government’s earnest in this regard, and helped its task of containing expenditure. 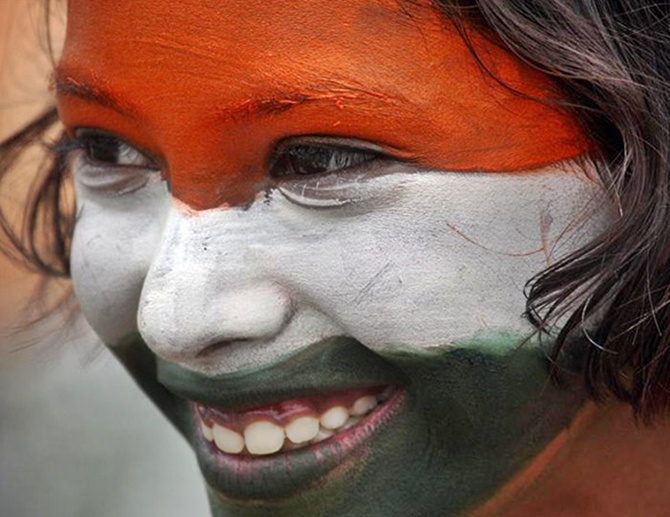 Second, even as token allocations are made for the new marquee programmes such as the bullet train diamond and port and hinterland development, a timeline and roadmap for their future development, along with likely budgets in a phased manner, could have helped convince all concerned about the government’s seriousness.

This is all the more important since future investments in these are predicated on the public private partnership (PPP) paradigm.  Both the railway and the general Budget repeated the PPP litany.

Chanting that mantra is not going to enthuse the potential investors, especially in view of the trouble the leading examples of the PPP model, the Delhi Airport Metro Express and the recently commissioned first phase of the Mumbai Metro (both involving the same private investor) face.

A government commitment to time and its share of investment would go a long way to assure the likely private partner of the returns expected.

To be sure, it is early days yet for both NDA and Jaitley.  They are riding a tiger that they cannot dismount easily.  There is also a clear bias in favour of the status quo, as evident from the fact that the finance ministry official team is pretty much intact from the UPA days.

That is how despite the widespread and well-founded suspicion that the last two years’ deficit data represent some suppression of relevant numbers, the figures are not disputed in the just released Economic Survey.

That document, the handiwork of the team of officials, represents mostly continuity with the past, notwithstanding the token acknowledgment of a few missteps.

Even as the Congress crows about this continuity with the past, we have to accept this old wine in the old bottle with the new label, but we await achchhe din, Mr Finance Minister and Mr Prime Minister.