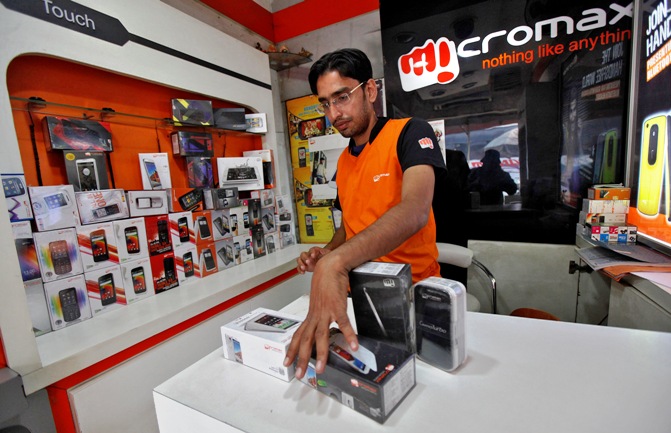 Micromax, which has become India's No. 2 smartphone brand, just five years after selling its first handset -- a $30 made-in-China model -- is looking to go upmarket and overseas.

The unlisted company sold 6.8 million phones in the July-September quarter, including 2.2 million smartphones, and is on track to surpass $1 billion in sales in the fiscal year ending in March.

With heavy advertising and phones based on Google Inc's Android software starting at $50 -- almost half the price of a comparable Samsung model -- Micromax has brought smartphones to the masses in a price-sensitive market where basic handsets still dominate. 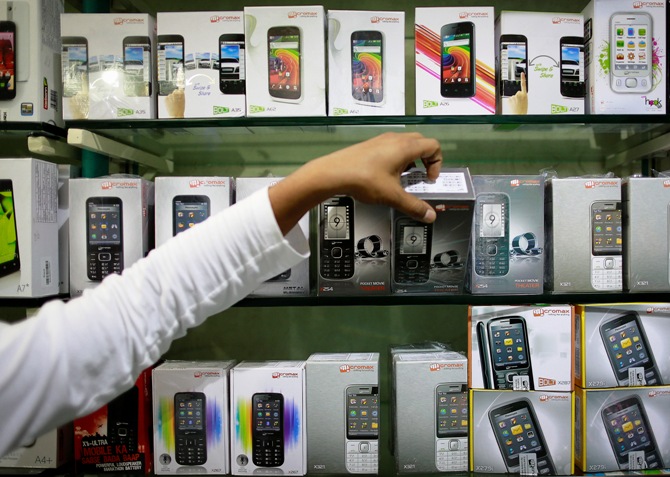 Image: An employee takes out a Micromax mobile phone from the display at a mobile store in Mumbai.
Photographs: Danish Siddiqui/Reuters

Among all types of phones, Micromax ranks third in India after Nokia and Samsung Electronics.

The company, which started out selling IT software and telecoms gear, entered the handset market with cheap phones featuring bigger screens, and the capability to use two SIM cards so customers can take advantage of bargains from competing carriers -- a feature Nokia was slow to match.

Now Micromax is looking to broaden its market by wooing brand-conscious Indians with more spending power.

In October, it rolled out a Rs 19,000 ($310) ‘phablet’ with a 5-inch screen promoted by ‘Wolverine’ star Hugh Jackman -- an unusual choice in a country where Bollywood actors and cricket stars are the preferred brand ambassadors. 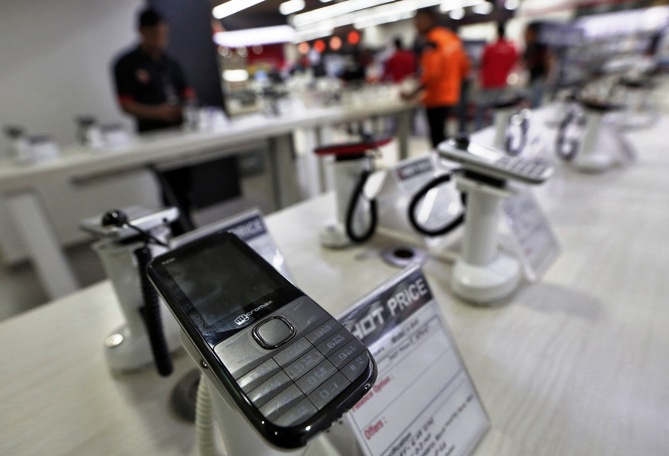 Image: A Micromax mobile phone is kept on display at a showroom in New Delhi.
Photographs: Adnan Abidi/Reuters

In January, it will begin selling phones in Russia, followed by Romania, where competitors also include Samsung and Nokia. UK-based Fly also sells China-made phones in Russia and Eastern Europe.

Micromax has also tried to tap the Brazilian and the Middle Eastern markets with basic phones, but did not manage to build scale and closed the operations.

Industry watchers say Micromax, which is backed by private equity firms TA Associates and Sequoia Capital, has its work cut out pushing into pricier segments dominated by global brands and building its brand from scratch in new markets. 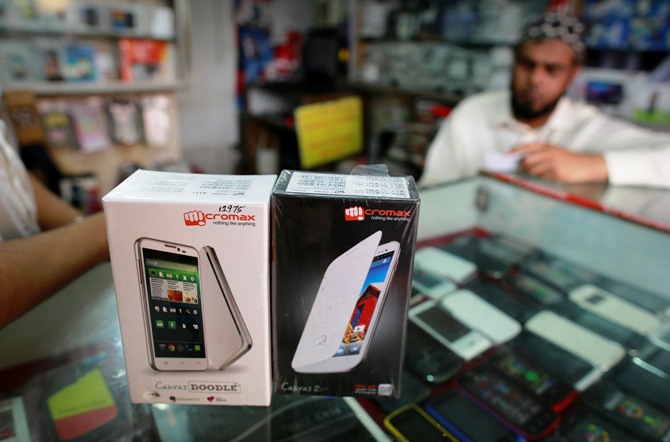 SIMS for all occasions

As mobile Internet prices in India have started falling, the smartphone market has taken off, with Micromax and other local vendors of low-cost China and Taiwan-made phones such as Karbonn and LAVA pushing hard into small towns.

"Effectively, they gave people, the youngsters especially, the first opportunity to graduate to a smartphone.

In India, where about 250 million handsets are sold annually, smartphones accounted for 20 per cent of sales in the latest quarter.

Few, however, can afford an Apple iPhone or a high-end Samsung Galaxy.

To keep costs down, Micromax mostly uses chipsets made by MediaTek and Spreadtrum, which tend to be cheaper than those made by industry leader Qualcomm Inc.

It does not have its own manufacturing plant, outsourcing production to China and Taiwan, but will start assembling some phones at a plant in northern India from next quarter. 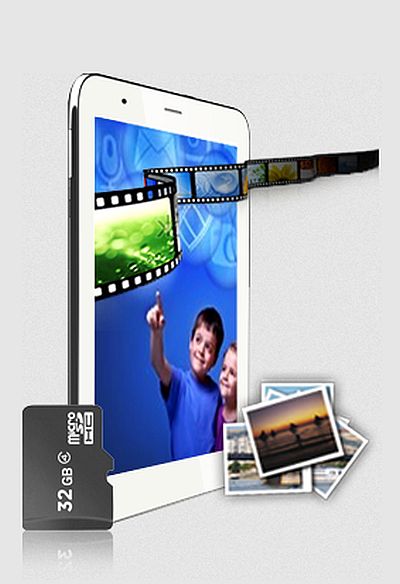 Rahul Sharma, a company co-founder, said he got the idea for a dual-SIM phone when he saw his cook used three SIM cards.

"He said one SIM card is local, and a second is for me to call my native village because the plan is very attractive," Sharma said during an interview at his office near New Delhi.

As Micromax moves into the higher end, it competes more directly with international offerings in the Rs 15,000 and above price range, where brand matters more to consumers.

"We think Micromax will struggle in the higher end of the smartphone market because richer Indian consumers often prefer the cachet of international brands," Mawston said.

"We do acknowledge that and are working very, very hard on that," Sharma said.

Micromax will keep pushing up the feature chain even as it continues to offer budget models, with plans to launch smartphones with faster ‘octa-core’ processors, 16 megapixel cameras and high-definition screens.