India’s top builders seem to be sitting on a huge unsold real estate inventory, worth nearly Rs 58,000 crore (Rs 580 billion), which could take more than two years to sell, a Business Standard analysis of 19 listed realty firms on the BSE-500 index shows.

At the end of March, the combined unsold inventory of these companies rose 25 per cent from a year earlier. Their net sales remained almost flat during the same period (see chart).

Of the Rs 58,000-crore pile-up, DLF, India’s largest real estate developer, accounted for almost a third. As of March-end, the Delhi-based company reported an inventory worth Rs 17,600 crore (Rs 176 billion), 18 per cent more than that two years earlier.

Following DLF is HDIL, which reported an inventory of Rs 12,043 crore (Rs 120.43 billion) at the end of March this year, more than six times its net sales last financial year. 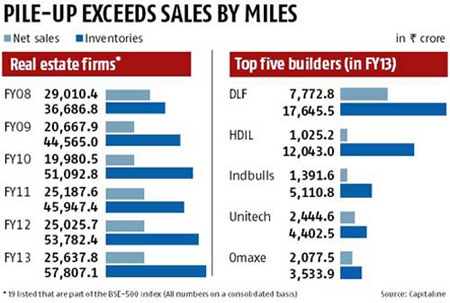 For the entire sector, the unsold inventory could be many times more, as a majority of developers are not listed. Delhi and the National Capital Region (NCR), for instance, have a little more than 400 builders but only four of those are listed and part of the sample here. In Mumbai, there are around 140,000 unsold apartments priced at an average Rs 1.2 crore (Rs 12 million) each, according to estimates.

The current inventory level is much higher than the optimal eight to 10 months.

“Builders need to maintain some inventory to maximise their price realisation. But if that exceeds 12 months, they are forced to borrow to fund their operating expenses. If not unchecked, it could start a spiral of inventory and borrowings,” says Pankaj Kapoor, founder & managing director of real estate consultancy Liases Foras.

This explains the close correspondence between inventory and borrowings in the industry. At the end of the last financial year, the companies in the sample were sitting on combined borrowings of over Rs 51,000 crore (Rs 510 billion).

With the interest rate rising, liquidity drying up and sales slowing, developers could be in for tough times, as they might be forced to generate liquidity, especially in Delhi-NCR and the Mumbai Metropolitan Region (MMR). Industry trackers attribute this to a combination of high real estate prices and poor economic growth.

“Inventory is growing because sales have slowed down. Following a price correction after the 2008 crisis, sales picked up. However, builders escalated the prices nearly 100 per cent by 2010, pulling down the offtake of new properties,” says Kapoor.

He estimates that the inventory in Mumbai could take nearly four years to sell out at the current absorption rate. The only way forward for builders now is to cut prices and create demand. “Price correction is imminent. It has started in NCR and now the trend is creeping into MMR,” he adds.

Sanjay Dutt, Cushman & Wakefield’s executive MD (South Asia), agrees that there could be some price reduction in the next few quarters. “Between now and Gudi Padwa (in April), there will be a price correction of 5-10 per cent in Mumbai, while prices could fall by 10-15 per cent in its suburbs,” he says.

Builders, however, seem to disagree.

“We have an inventory problem but that is not as big as being portrayed. In many cases, this is planned inventory to stagger revenues over a period and optimise per-unit realisations,” says DLF Senior Executive Director Sriram Khattar.

“Inventory will decline through a combination of price correction, reduction in number of new project launches and higher sales,” he adds.

The view is seconded by industry body Credai. Chairman Lalit Kumar Jain says the industry doesn’t have too much of an inventory problem. “Price correction has already happened in most markets and developers are selling at their best price due to liquidity crunch. The market is almost bottoming out,” he adds.