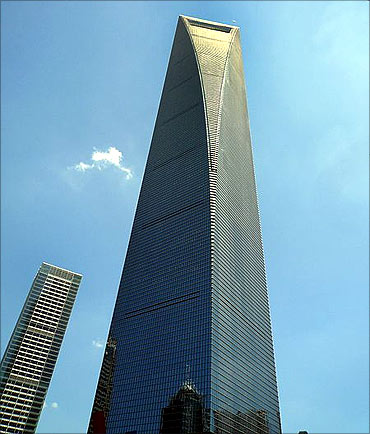 The United States no longer lords over the world's most prestigious infrastructure projects.

Some of the world's biggest and most expensive infrastructure projects are in China.

China, Brazil, the Middle East and other parts of the developing world, account for nearly half of the most expensive projects in the world.

Built at a cost of $1.1 billion, this Shanghai tower was designed by architectural firm Kohn Pederson Fox Associates. It houses offices, hotels, conference rooms, observation decks, and shopping malls on the ground floors. Park Hyatt has 174 rooms and suites in this tower. 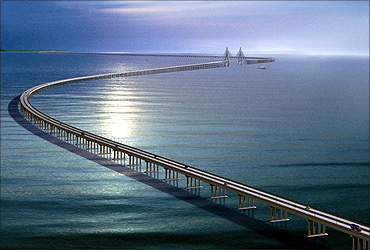 The world's longest trans-oceanic bridge extends across the Hangzhou Bay to over 35.673 kilometres (22 miles).

It has six expressway lanes in two directions. Inaugurated in May 2008, this modern wonder is an S-shaped stayed-cable bridge with six lanes in both directions.

It brings down the distance between Shanghai and Ningbo by 120 km. This architectural wonder cost $1.70 billion. 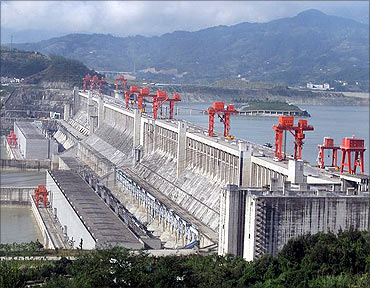 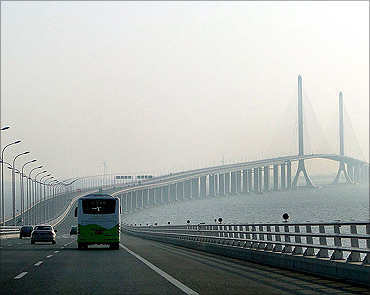 The tunnel and bridge are part of the Hushan Expressway between Shanghai and Xi'an. 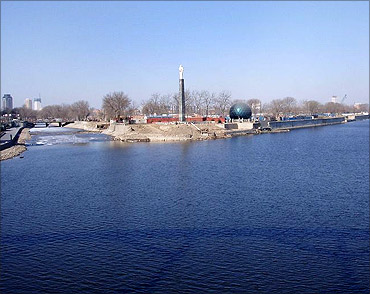 The $62 billion South-North Water Transfer Project would divert 44.8 billion cubic meters of water per year from the Yangtze River in southern China to the Yellow River Basin in arid northern China.

The project aims to connect Haihe with the three other major rivers - the Yangtze, Yellow and Huaihe. 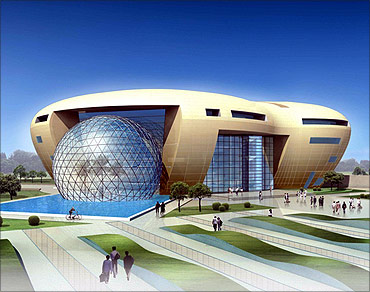 Expected to be completed in 2013, the project includes a total of about one million square meters of apartments, two hospitals and several schools and nursery schools. 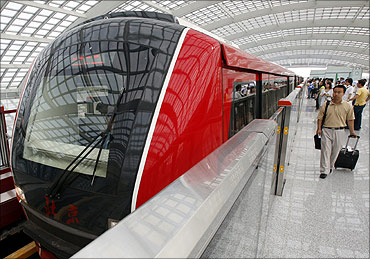 One of the world's busiest airports, the Beijing airport was built at a cost of $3.5 billion.

The Terminal 3 built in 2008, is the second largest airport terminal in the world after Dubai International Airport's Terminal 3, and the third largest building in the world by area. 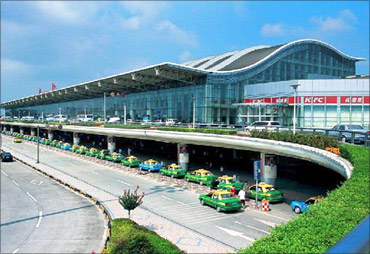 With flights to more than 20 international destinations and many domestic airports, it is a hub for Chengdu Airlines, Air China and Sichuan Airlines. 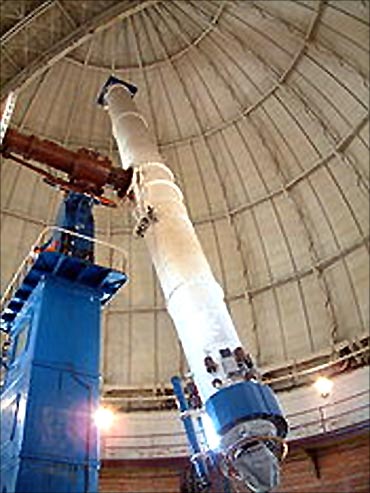 The telescope located in Pingtan County will be the world's largest, the size of 30 football fields.

The telescope's main spherical reflector will be made up of 4,600 panels.  The $102 million project will be completed in 2016. 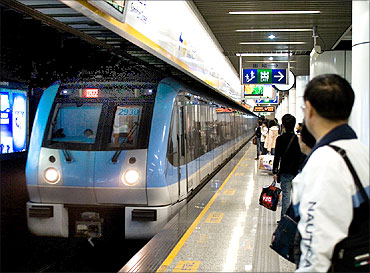 The metro's Line 1 24.5 km-long south extension and Line 2 were both put into operation, increasing the total length of Nanjing metro system by nearly four times. 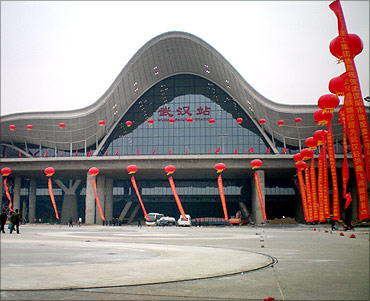 The Wuhan Railway Station is one of the harbor stations on the Wuhan-Guangzhou high-speed railway.

The design was inspired by the yellow crane, the symbol of Wuhan City. 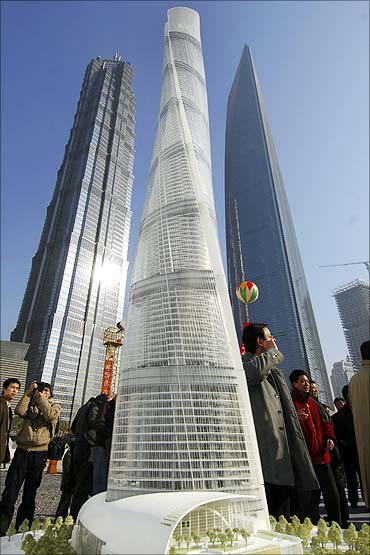 The Shanghai Tower designed by Gensler will be the tallest building in China and the second tallest in the world, after its completion in 2014. 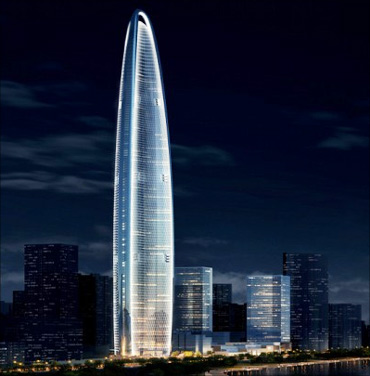 This will be the world's third tallest building. The Wuhan Greenland Center, developed by the Shanghai-based Greenland Group and designed by Adrian Smith and Gordon Gill Architecture, will take five years to build.

With the height at 606 meters, the $750 million building will house luxury hotels, office space, high-end stores and apartments. 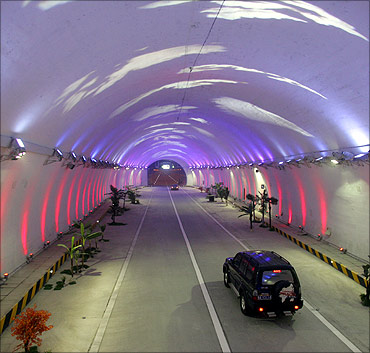 China has spent $473 million to build the longest highway tunnel. It will reduce traveling time in the Shaanxi province. 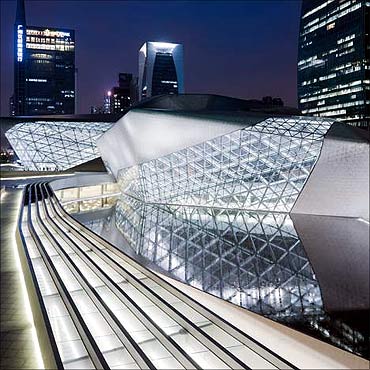 Designed by architect Zaha Hadid, this theatre has become the biggest performing centre in South China and is one of the three biggest theatres in China.

It took five years to build this architectural marvel at a cost of $200 million. 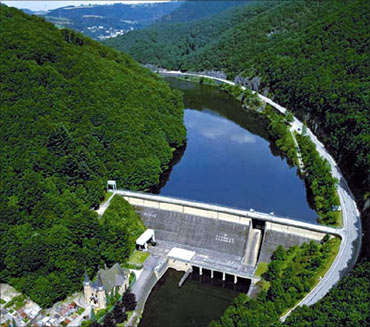 The $6.3 billion Xiangjiaba hydropower project will start generating power from 2012.

Built on the Jinshajiang River, this will be the third-largest hydropower plant in China. The $5 billion high-speed magnetic levitation railway project, or maglev will travel a distance of about 200 kilometres between Shanghai and Hangzhou.

The Shanghai-Hangzhou high-speed maglev line will allow trains to run at speeds of 400 kilometres per hour. 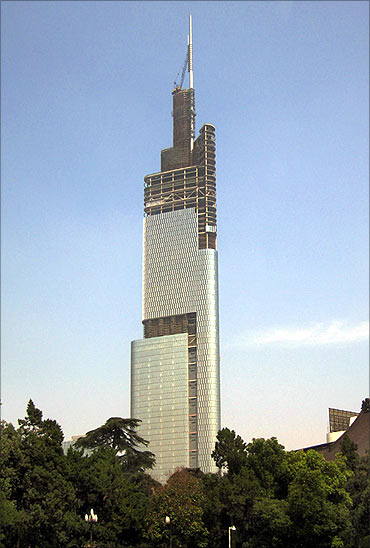 The Nanjing Greenland Financial Centre is a 1,480 feet high building in China.

The 89-storey building will have retail and office space in the lower section, and restaurants and a public observatory near the top. 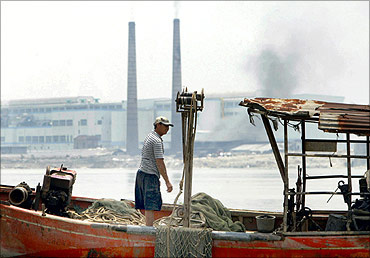 Image: A Chinese fisherman works on the Pearl River against a backdrop of a factory in Zengcheng, Guangdong
Photographs: Reuters.
Turn The Pearl River Delta Into One project

The new mega-city will cover China's manufacturing base from Guangzhou to Shenzhen, including Foshan, Dongguan, Zhongshan, Zhuhai, Jiangmen, Huizhou and Zhaoqing, acounting for a tenth of the Chinese economy

The $306.7 billion 'Turn The Pearl River Delta Into One' scheme will build a 16,000 square mile urban area that is 26 times larger than Greater London, or twice the size of Wale 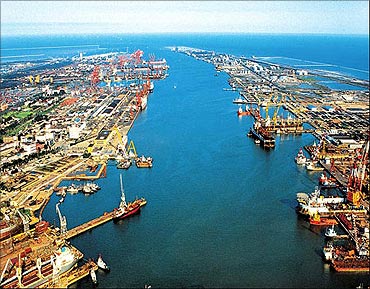 China is now the second largest energy consumer. The $3.3 billion Tianjin offshore drilling rig is a base for offshore oil discovery. 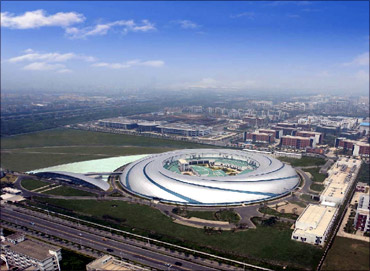 Opened in 2009, this is China's biggest investment in a science research facility.

The Shanghai plant is one of the 60 synchrotron radiation facilities that exist worldwide. The Qinshan Nuclear Power Plant is a multi-unit nuclear plant under construction in Qinshan Town.

When completed, it may hold the record for the most nuclear reactors on one site.

The construction of the $2.2 billion project has been divided into five stages. Three stages have been completed. 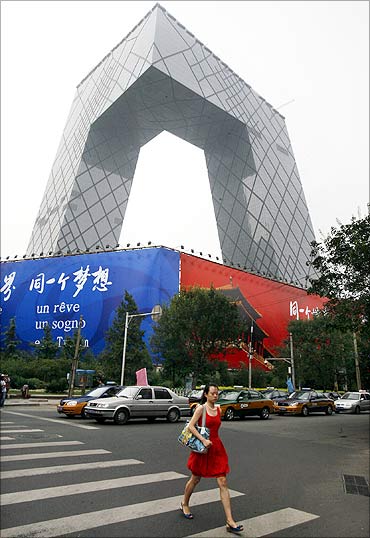 The CCTV Headquarters is a 768 feet, 44-storey skyscraper in the Beijing Central Business District (CBD).

Designed by Rem Koolhaas and Ole Scheeren of OMA, this $760 million project has a loop of six horizontal and vertical sections covering 1,552,000 ft of floor space, making an irregular grid on the building's facade with an open center. The largest station in Asia, it serves as the terminus for high-speed trains to the city, including the Beijing-Tianjin Intercity Rail, which can reach speeds above 350 km/hr.

Built at a cost of $6.3 billion, this is the third railway station in Bejing. 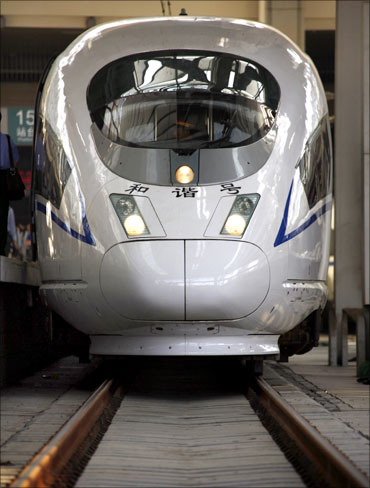 The $33 billion rail project stretches to 1,318-kilometres, starting from Beijing and ending at Shanghai.

Though the railway line is has been built to sustain a maximum speed of up to 350 kph, the government has decided to reduce it to 300 kph at the initial stage. 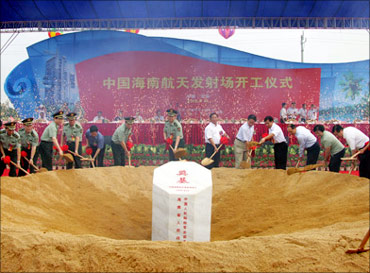 The construction of the $12 billion launch centre began in 2009 and is expected to complete by 2013.

The centre will launch satellites and unmanned spacecraft for all domestic and commercial operations. 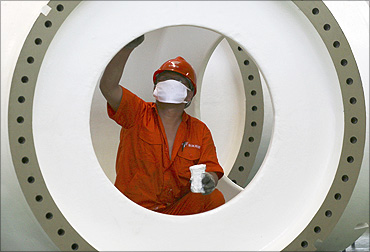 Image: A labourer paints a component of a wind mill at a wind power equipment factory in Jiuquan.
Photographs: Reuters.
Jiuquan Wind Farm

China's Jiuquan Wind Farm will be the largest wind power base in the world in 2013.

The $18.2 billion Jiuquan mega wind power base will be built in two phases. 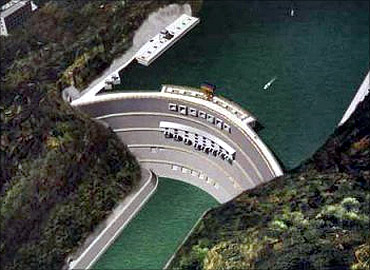 The Xiluodu Dam is a hydroelectric dam project on the Jinsha River.

After halting the project in 2005, construction was restarted to build the third tallest dam in the world. 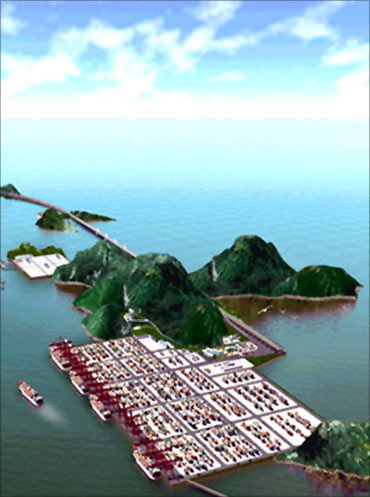 The first phase of the $8 billion Yangshan Deepwater Port construction started in 2002.

The mega project will be completed by 2020. More than 50 container berths, capable of handling the fifth and the sixth generation of container ships (5,000-6,000 TEU) will be built.

The $8 billion project will be the biggest and busiest container terminal in the world. 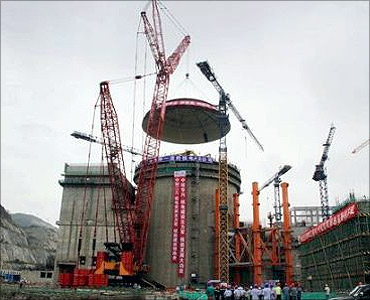 The Yangjiang project is one of the largest nuclear power stations in China. It will host six domestically engineered CPR-1000 pressurized water reactors, generating around 1080 MW each.

The total investment in Yangjiang's six reactors is $10.2 billion.