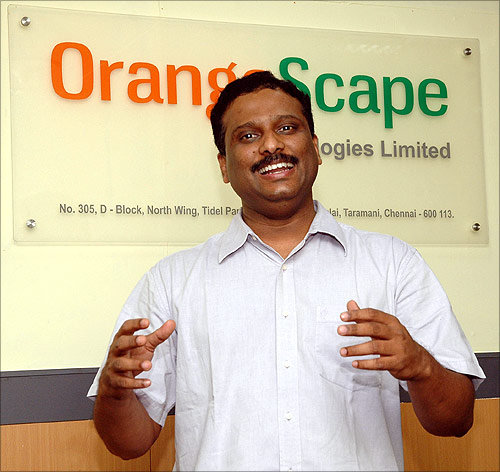 OrangeScape, one of the most successful start-ups in India, was in the news last month, when it was named the prime technology partner for 'Google App Engine'.

With this, OrangeScape has moved to a different league in the PaaS (Platform as a Service) space. The $5 million company with 50 people is aiming to be a billion dollar company in the next 5 years.

The journey of Suresh Sambandam, founder and CEO of OrangeScape as an entrepreneur, started at the age of 19 in Cuddalore, a small town in Tamil Nadu. Today, he is not only a successful entrepreneur but a man with a few patents to his credit and an angel investor in start-ups in Chennai.

As the CEO of OrangeScape, he shuttles between India and the United States.

Growing up in a small town

I grew up in a small town in Tamil Nadu called Cuddalore. I became an entrepreneur at 19 when I was not even aware what entrepreneurship was. I would say I was an amateur entrepreneur then. I did not have this urge to be an entrepreneur; I only wanted to be independent and free.

When I finished my 12th standard in 1990, my father's real estate business was in trouble. So, I had to opt for distant education in Commerce from the University of Madras. 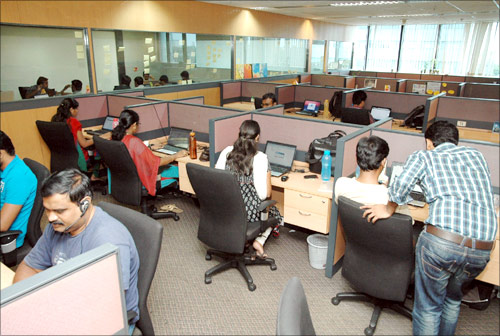 Having free time in the evenings, I and my friend decided to learn typewriting as it was in vogue then. That was the turning point in my life. Other than the typewriters, the institute also had one computer. Computers were just entering our lives then. When the institute manager offered to teach me computers for Rs 50 a month, I joined the course.

I had no idea what computers were. I just started learning and it opened a new world.

From Basic, I soon moved to dBase and sitting in a remote corner of India, I created an airline reservation system when I had never travelled in an aircraft or seen it at close quarters.

I was so fascinated by computers that I went in the afternoons also to the institute when it was deserted so I got more time to learn.

The idea to start a computer centre came to my mind when I felt that was the only way I would get to work on computers all the time. Five of us (friends) decided to pool in Rs 25,000 and start a centre.

When I asked my father for Rs 25,000, he refused to give me but my persistence worked and I borrowed the amount from him.

I was so happy finally when we opened the centre in 1993. The other four guys were only financial partners as they had other work. I got the centre all to myself.

Our plan was to teach students in the mornings and evenings and also create some products. We had already gone to some industries at the SIPCOT in Cuddalore with proposals, and we got offers to do automation process in many companies. The centre used to make Rs 30-35,000 every month which was just break-even for all of us. The only one who had fun was me.

I went to Pondicherry and bought computer books as there were no such books available in Cuddalore. I was like Ekalavya, I learnt Basic, dBase, Cobol, C, C++, and Unix by reading books.

In 1996, when we decided to close it down, all of us got back what we had invested. It was in addition to what we made every month.

Had internet arrived in Cuddalore at that time, we would have been able to continue the centre for some more time. Anyway, after we closed the centre, I gave the money back to my father! 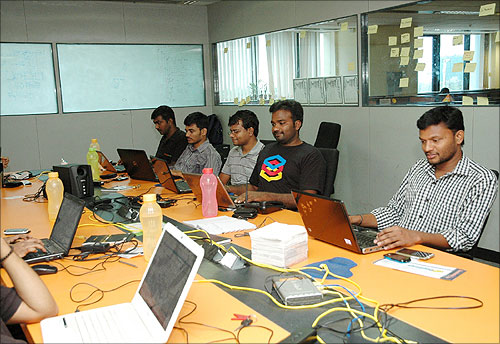 From Cuddalore to Bangalore

After finishing my graduation, I decided to work in a company so that I would get an idea of how the corporate sector worked.

At that time, only Bangalore and Mumbai were the places to be if you wanted a career in computers. Chennai was not in the picture at all. So, off I went to Bangalore.

Going from a small town to a place like Bangalore was very intimidating. Even the way I dressed was so different from what others did. Luckily, I had a good command over English as I studied in a convent school.

I literally roamed the streets looking for a job. I must say it was by sheer luck that I got one. Java had just becoming popular and I had learnt it. I saw an ad in the paper that Hewlett-Packard was looking for people who knew Java, and I applied.

I did well in the test and interview, and was offered the job as I was the only one among the applicants who knew Java.

I came to know later that HP selected me because in one portion of a project, they needed someone who knew Java. Later they and I found out that there were only 10 lines of Java code! Anyway, as I was proficient in C and C++, I also did the rest of the 10 million lines.

I started off as a Software Engineer and got three promotions in three years and became Software Analyst. 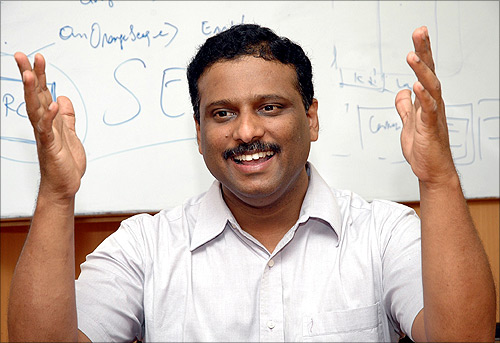 Applying for a patent

When I left in 2000, I had already applied for a patent. It was about a compression technique and not in the area I was working on. When we were running a huge program, I found that the data communication between the server and the client was very slow as a large amount of text data was being transmitted.

I wrote a paper on this and gave it to the HP patent office and they felt it was a patentable idea and applied for one.
Much later, I realised that the patent would go only to HP and not me! But it is in my name as the inventor but assigned to HP.

At that time my boss Ayee Goundan, who was known as the father of R&D labs, and was with HP for 16-17 years, left to start Selectica, a company of his own in Silicon Valley with an office in Chennai. The company was in rule-engine space where I wanted to be.

I joined as Software Analyst at Selectica in Chennai and became the Director of Product Engineering in three years.

The trigger to start my own company was, Accenture taking over our division. That made me think it was high time I started something of my own. I never wanted to work for any large consulting company.

Accenture did many blunders while acquiring the business. They did not add a clause that employees also should go with the acquisition. They actually thought it being such a big company, everybody would flock to them.

After the acquisition, I along with a group of people who were working in my team told them that we were leaving. They were shocked. 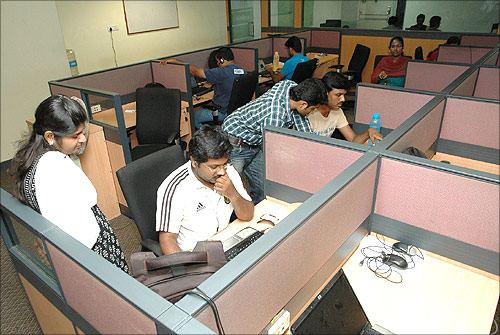 When I was trying to name my company, I asked my boss at Selectica what it should be. He said, find a name that is international but with a Tamil or Indian root. That is when I thought of Orange and named it OrangeScape.

In Selectica, we used rule based engines and they were used by high end programmers; rule-engines were invented so that people who are not programmers also can use the engine.

So, we thought, why not create a product which will help ordinary people use business rules? That continues to be the vision behind OrangeScape. We call this democratisation of computing.

I asked my boss whether he would fund OrangeScape and he readily agreed to be the first angel investor and gave us a couple of crores over a period of time.

After we left, Accenture came to us for consulting and we charged them Rs 2.5 crore for 9 months. That became our capital.

With 5 people, and Mani Doraisamy as the co-founder, OrangeScape was launched in December 2004. 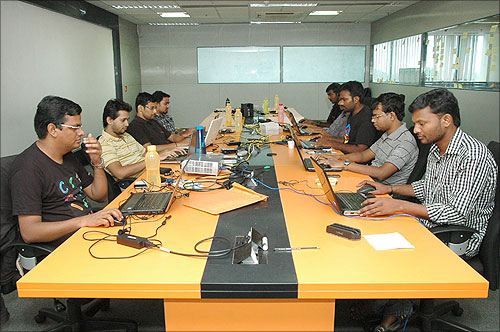 "Dimension" was our first product. It took us a couple of years to develop it. It was a pre-cloud version. We first signed up Numeric UPS in Chennai as our first customer followed by the Rane group of companies, Unilever and Citibank.

In fact, we sold it to a large number of top IT companies. It was a high end product that companies with more than a revenue of Rs 500 crore (Rs 5 billion) could only buy our product.

And in our first year, we made a revenue of Rs 1 crore (Rs 10 million). Then we realised that if it had to be easily accessible, it had to be a lot more simple.

Cloud computing and cloud based product

Cloud computing came around that time. We had encountered a few problems earlier which needed a solution like the cloud, and when it came, we felt this was what we were looking for.

We also made it browser based; Dimension had to be installed from a CD. We were one of the pioneers who created a browser-based development environment which could run on the cloud and deploy on the cloud. 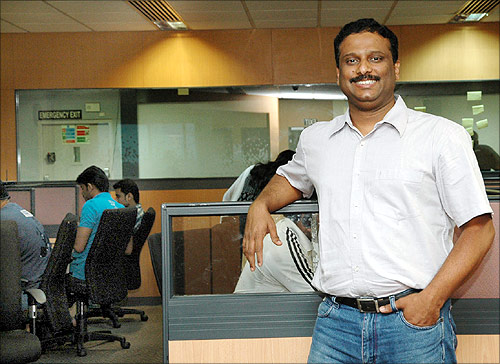 Betting on the Google App engine

We also made some big decisions like betting on the Google App engine when it was just a beta version. It has paid off well and we ended up closer to Google.

Platform as a Serice (PaaS)

The cloud has three layers; one is hardware, which is at the bottom. The software application is at the top. In the middle is the platform and OrangeScape is at the platform level.

Our customers grew, and one of the largest deals OrangeScape got was with ESIC from Wipro for Rs 5 crore. At one point, we had 100 developers working on a single project which is ESIC, accessed by 20,000 employees all over India.

We have 50 customers now.

With the Internet, we have been able to move to the UK, Europe by 2011 and we became a $5 million company. To take us into a growth trajectory at a faster pace, we looked for investors.

We raised Rs 5 crore (Rs 50 million) in India and launched ourselves in the US so that we could raise investment there. Now, we are trying to raise Rs 50 crore in the US.

We have one more product now; KiSSFLOW for Google App users. 300 customers across 64 countries signed up for it.

In 2008 itself, we had bet on the Google App engine. Last month, we have been listed as the first and only technology partner on Google App Engine. Also, in the Google announcement, OrangeScape has a prominent mention, and it shows the kind of confidence Google has on OrangeScape. This has been so prestigious that all Google partners are reaching out to us.

In another 5 years, we will be a billion dollar company, for sure.

I am also investing in start ups these days as a social cause. With the desire to help the ecosystem in Chennai, I first invested in the Start up Centre started by Vijay Anand. I felt it was a good cause to support.

It is high time we moved from services to creating products. So, I will tell budding entrepreneurs, this is the great time for them to take the plunge.

With places like Start up Centre to polish and curate ideas and lots of investors with lots of money looking for great start ups and good entrepreneurs, they cannot have a better time.