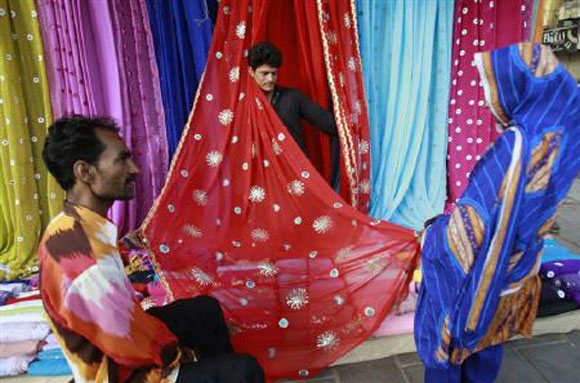 Bangladesh is a favourite talking point these days in Tamil Nadu's Tirupur, the largest textile exporters' hub in India, on a chance to woo back foreign buyers.

A close second is foreign investment in retailing, with special emphasis on groups such as Sweden-based Hennes & Mauritz (H&M) and America's GAP wanting to enter the country.

The Cabinet nod to furniture major IKEA for setting up shop in India also generates interest, though the company is not into garments and does not have a sourcing base in Tirupur, about 50 km from Coimbatore, in the west-central part of the state.

Battered by economic slowdown in Europe, long hours of power cuts at home and closure of dyeing units due to court diktat, Tirupur exporters, already supplying knitwear and other cotton apparel to international brands such as Walmart, H&M, Carrefour, C&A, Tommy Hilfiger and Marks & Spencer, are keenly tracking the developments around the recent collapse of a textile factory in Bangladesh.

The collapse killed more than 1,000 workers and has triggered immense global media attention on pressure on brands having outsourced work to Bangladesh factories. 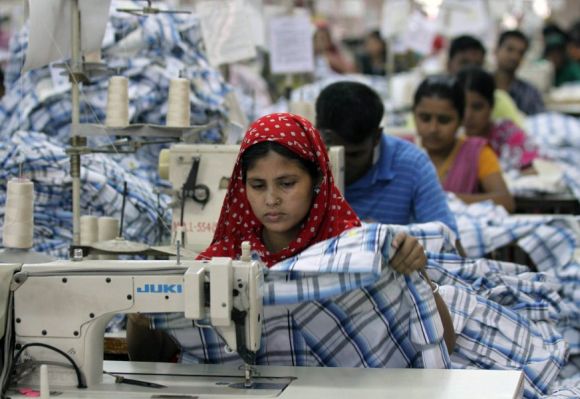 Image: A worker sews inside a garment factory in Ashulia, Bangladesh
Photographs: Reuters

The question is whether the Western chains would bring greater business to Tirupur if they were to shift out of Bangladesh.

A Sakthivel, president, Tirupur Exporters' Association, says: "It was the fault of international buyers that they kept their eyes shut to the Bangladesh factory situation just because they could source products 10 per cent cheaper due to lower duties and labour cost."

Claiming Tirupur units were "compliance-oriented", he said many of the Western buyers could perhaps purchase more from India now.

Yet, many exporters on condition of anonymity said international brands were unlikely to leave Bangladesh, as the cost advantage was significant there.

Also, Tirupur factories, which export Rs 13,000 crore (Rs 130 billion) annually, with Europe buying 65 per cent of the total, are planning yet a price rise of around 7 per cent due to the power crisis hitting their operational expenditure.

In the past four years, the cost of production here has gone up by at least 50 per cent, prompting global buyers to look for cheaper pasture, mostly Bangladesh. 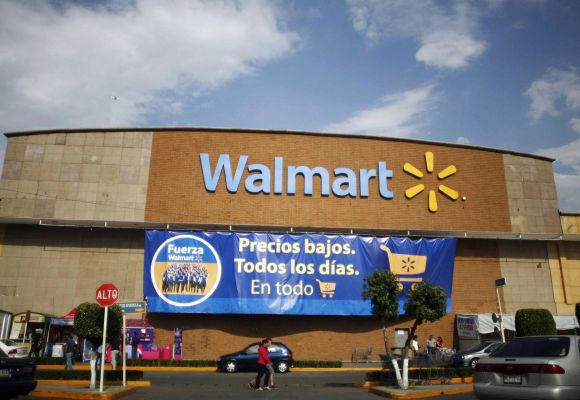 Image: People walk past a Wal-Mart store with a banner reading ''Low prices, every day, in everything'' in Mexico City.
Photographs: Bernardo Montoya/Reuters

A sourcing manager, not wanting to be named, pointed out that another price rise at Tirupur would certainly mean global buyers tilting more towards Bangladesh, irrespective of the problems there.

Many of the top European brands have decided to sign a pact committing to invest in building and fire safety in Bangladeshi factories, from where they buy apparel worth millions of dollars.

American chains such as Walmart and GAP have resisted the move, saying they have their own safety mechanisms in place.

Bangladesh is the second largest garment exporter in the world after China. It has been steadily gaining market share due to its cheap labour, with monthly wages as low as $40 for a worker, against an estimated $200 in India and $150 in China.

On its sourcing strategy in the backdrop of the current developments, a Walmart spokesperson said, "The company does not release data regarding sourcing volumes by country. However, Walmart has been sourcing a variety of products from suppliers in India for more than 20 years and India continues to be an important sourcing market for us." 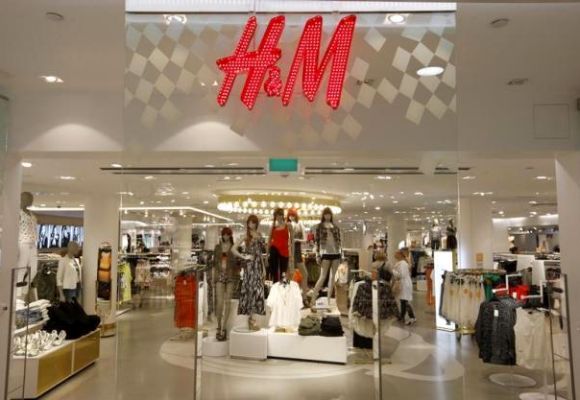 Added, "India offers us quality products at competitive prices that are sold in Walmart stores around the world."

Some other prominent international chains buying from Tirupur factories, including Germany's Metro and Sweden's H&M, did not reply to the questionnaire sent by Business Standard.

H&M, which is a reason for some cheer in this southern town for its proposal to enter India, is among the biggest buyers of apparel in Bangladesh.

Indian retail policy mandates all single-brand chains with foreign direct investment (FDI) over 51 per cent setting up stores in the country to source at least 30 per cent of their sales from India.

This could better fortunes for the Tirupur industry once the likes of H&M set up shop.

Multi-brand chains have to buy at least 30 per cent from Indian small and medium scale industries. 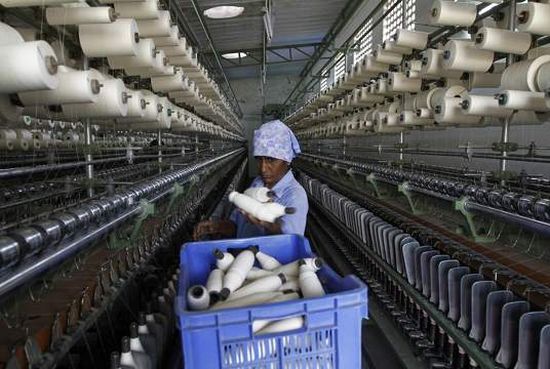 Image: A worker handles the production of yarn on a yarn-spinning equipment at a factory.
Photographs: Babu/Reuters

P Vaidyaprakash, among the very few exporters in Tirupur who agreed to talk, would like to believe that FDI in retailing could change the fortunes of this textile hub.

On the impact of foreign retailers coming to India, TEA President Sakthivel said, "We already work with all the leading brands, as they source from here."

Hopeful that foreign chains will buy much more than their mandatory 30 per cent from India, he said, "Once they set up stores in India, exporters' business will grow."

Even the trade unions in Tirupur are in favour of FDI in retail, though the Tamil Nadu government is opposing it, according to Sakthivel.

It is Kadarpet, close to Tirupur railway station, and known for its export surplus of branded clothes, that buzzes with activity through the day. 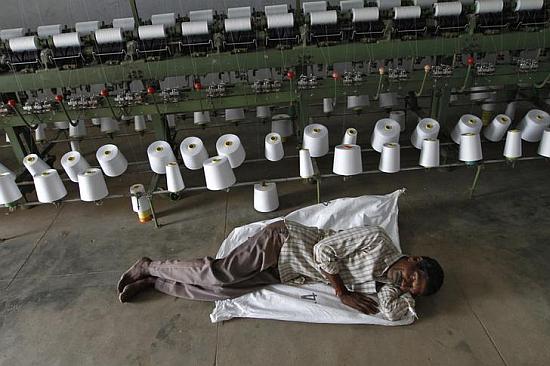 Image: A worker takes a nap during a power cut in front of yarn-spinning equipment inside a factory.
Photographs: Babu/Reuters

As for the textile units, around 1,000 or so while not counting the ancillary ones, international buyers' trips have reduced, compared to the heydays of 2010, when exports from here had hit the magic figure of Rs 13,000 crore (Rs 130 billion) - it has not moved up since.

That explains why exporters don't want anything to go wrong and let the association president do the talking for all.

A bad international press over under-age labour and low wages has made them wary, prompting some of them to display 'no child labour' boards on factory gates.

An exporter measured the decline of the Tirupur business with the time taken to travel from Coimbatore, the closest airport.

"Till some months ago, you would have taken over two hours to reach. Now, you take half the time." The traffic jams and honking vehicles are rare while entering Tirupur now.

The next generation here is determined to go for software jobs with handsome salaries or get into the real estate business, which holds much better promise than spinning yarn.

Redundant mills, with acres of land all around the town and on the outskirts, might be the starting point for their realty ambitions to take off.