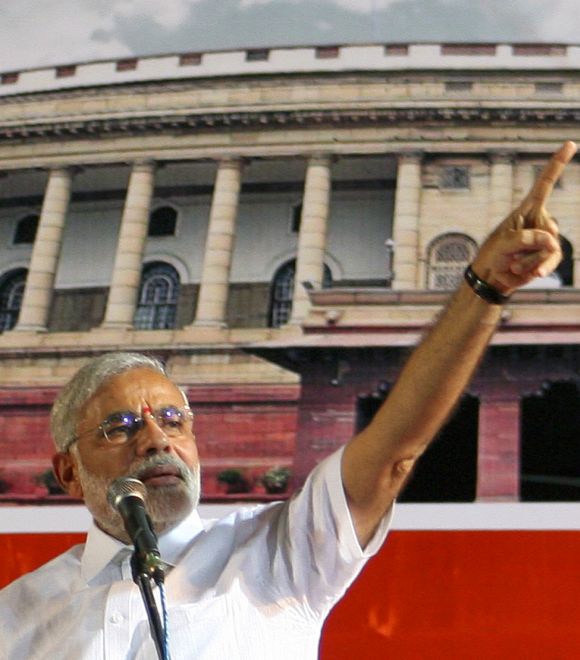 The data shows that the state has reduced poverty and malnutrition, sex ratio has improved, and the quality of education is better.

With the bid by Gujarat Chief Minister Narendra Modi for the office of the prime minister of India in full swing, attacks on the Gujarat story have intensified.

Given the narrowing of the contest to one between Mr Modi and the Congress, one would expect the critics to compare the accomplishments of the former in Gujarat to the latter's nationally. But no critic would hazard such a comparison.

The data leave little room for anyone to credibly question the superior performance of Gujarat in industrialisation, agricultural development, and overall growth.

Therefore, critics have invented the argument that thanks to its long-standing entrepreneurial tradition, Gujarat has always grown fast.

But if so, why is Rajasthan not a growth powerhouse despite its legendary Marwari entrepreneurs? Attracted by the superior business environment, those entrepreneurs have in fact migrated to Gujarat. 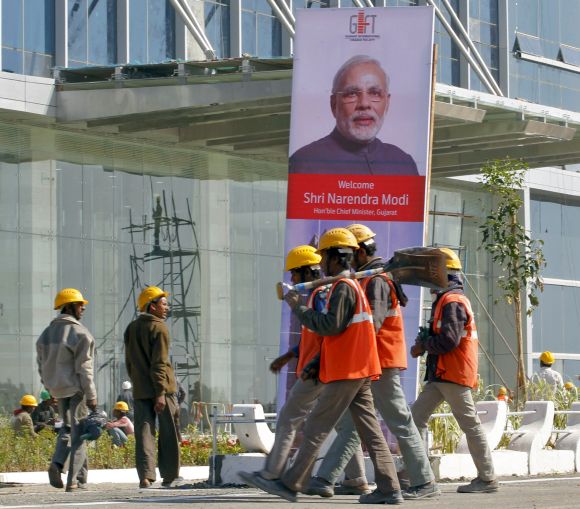 The claim that Gujarat has always grown fast also turns out to be false. A recent study by economists Archana Dholakia and Ravindra Dholakia shows that the trend growth rate in Gujarat was below the national average in the 1960s, above it in the 1970s and below it yet again in the 1980s.

Far from always growing the fastest in the nation, Gujarat has not even grown faster, always, than the national average.

Christophe Jaffrelot has questioned Gujarat's record on poverty. But he relies on dated evidence and faulty analysis.

Given that the poverty ratio in Gujarat in 2004-05 was already 5.4 percentage points below the national average, this progress is nothing to scoff at.

Else, we would berate even more the 12.7 percentage point decline in Kerala over the same period. 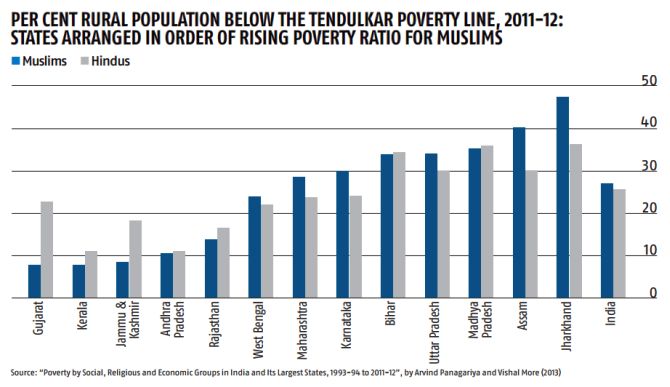 Gujarat also deserves applause for the large cuts in poverty among the Scheduled Castes (SCs) and Muslims.

For SCs, poverty is now only 1.4 percentage points higher than that in the general population. Nationally, the gap is much larger. 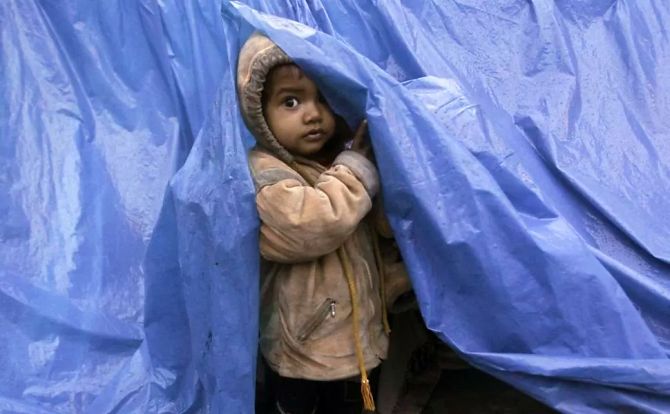 Gujarat has been widely admonished for its poor achievements in the area of child malnutrition. But the criticisms rely predominantly on the National Family Health Survey data that end in 2005-06.

Estimates based on the more up-to-date data from the Integrated Child Development Services (ICDS) paint a very different picture.

Cited by the Comptroller and Auditor General of India in a 2012 report, these estimates show that Gujarat cut the proportion of underweight children between 2006-07 and 2010-11 by a gigantic 32 percentage points.

According to Gujarat state officials, quoted in a media report this month, the state has achieved an additional reduction of 14 percentage points in 2011-12 and 2012-13. 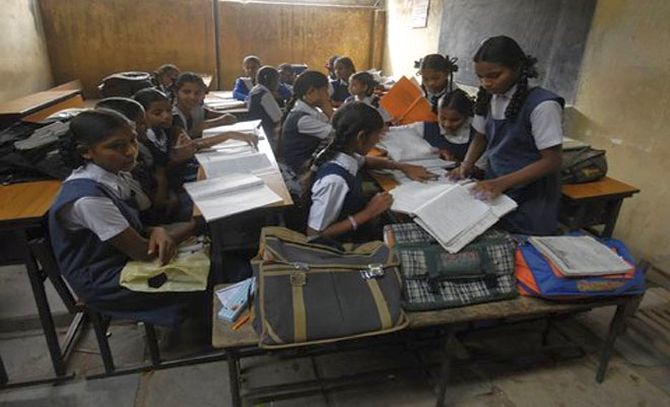 Thus, soon after the 2001 census brought to light the sharp decline in the female-to-male-child ratio, the Gujarat government launched the "Save the Girl Child Campaign". Subsequently, the ratio has seen a steady improvement.

Likewise, anticipating the damage that the huge emphasis on input norms in the Right to Education (RTE) Act could do to elementary education, Gujarat has adopted the most innovative implementation rules.

These rules limit the requirements for the recognition of as yet unrecognised schools to eight square feet of area per student plus 60 square feet for the teacher in each classroom.

Much more importantly, continued recognition is based on a formula that assigns 30 per cent of the weight to the level of learning outcomes and an additional 40 per cent to the improvement in those outcomes. 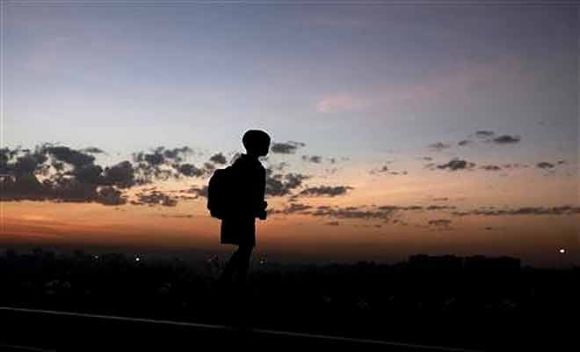 To be sure, in terms of levels of most social indicators, Kerala beats all states. But this largely reflects its historical lead.

It is also true that Tamil Nadu often leads in improvements in the indicators. But this hardly detracts from the impressive progress Gujarat has made in improving literacy and many health indicators.

The critics want to turn the best into the enemy of the good to give a walkover to the bad, but that won't work. 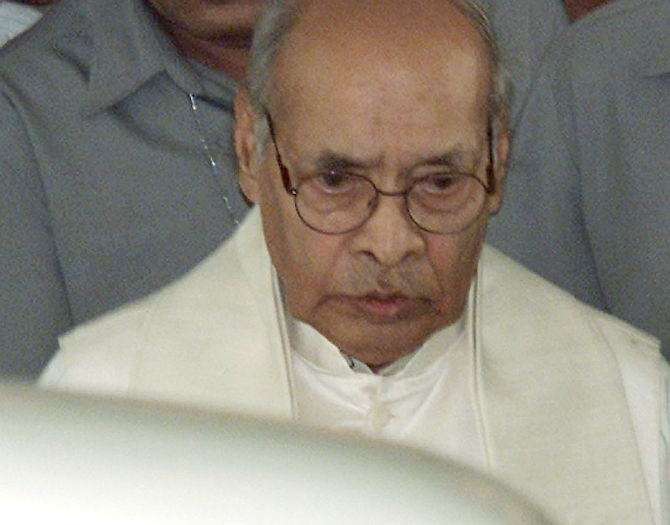 Finally, critics argue that state-level experience is irrelevant to governing a nation. But this is incorrect for two reasons.

First, Gujarat is not a banana republic: it is approximately equivalent to the United Kingdom in population and area.

The success of Prime Minister Narasimha Rao was in no small measure due to his on-the-ground knowledge acquired as chief minister of Andhra Pradesh.

Closer to my present home, the most recent US presidents who have been successful - including Ronald Reagan, Bill Clinton and George W Bush - have been state governors with no prior experience at the national level.

Ironically, it is Barack Obama, a former US senator with no experience as state governor, who has overseen some of the worst logjams in the United States Congress.