Amid all the gloom on the economic and financial front, Sandesh Kirkire, CEO, Kotak MF, suggests five bold measures to get the Indian economy back on the growth path, arrest the rupee's downfall and address India's bulging current account deficit.

The Indian rupee hitting a new low against the US dollar has become a daily affair for some weeks now.

Corporates blame the slow pace of reforms for India slipping to 5 per cent growth rate.

The Indian stock markets find it difficult to find a bottom; they get into sell-off mode as soon as they check the first quote on the rupee-dollar front.

Amid all this gloom on the economic and financial front, Sandesh Kirkire, CEO, Kotak Mutual Fund, suggests five bold measures to get the Indian economy back on the growth path, arrest the rupee's downfall and address India's bulging current account deficit. 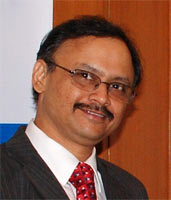 Why do you think the rupee is sinking to new lows every day? What measures will help it stabilise?

the rupee is like any other commodity. Its price is determined by demand and supply.

We have a high trade balance and a high current account deficit that is leading to the drop in the value of the rupee.

This is also a global phenomenon as all emerging market currencies are losing against the dollar on account of the likely Fed (the US Federal Reserve) tapering by September end.

The world was slosh with liquidity all these years in order to prevent the global recession in 2008. This large liquidity overhang of the US dollars entered into the emerging markets including India.

The fear of that liquidity withdrawal is what has depreciated the Indian rupee.

What is also needed is large scale reforms from the government that would attract more global flows both on the portfolio side as well as in the form of FDI (Foreign Direct Investment).

The global portfolio flows would come, or for that matter would not go out, if we see an improvement of growth in the economy.

Our growth has plummeted to 5 per cent levels and there is a likelihood that it may go lower than that.

There are a host of projects, especially in power and mining, which have been stuck up for various reasons.

They need to be cleared immediately.

We have one of the largest reserves of coal and iron ore, but we are still importing these when a few years back we were actually exporting the same.

The current levels of the rupee would also reduce the trade deficit and that should be positive.

Is there something fundamentally wrong with the Indian economy or have the speculators and arbitrageurs taken over, resulting in the Indian currency's downfall?

The RBI has plugged all speculation, both onshore and offshore. India has to regain its manufacturing efficiencies. This can happen with reduced government involvement and faster clearances of all projects stuck at various levels within the government.

Could you list five bold measures that will help stem the rot in the Indian economy?

Short-term as well as long-term measures that will take us back on the growth path and impart stability to the rupee-dollar exchange rate?

1. Clear all projects stuck up for want of various clearances, for instance, environmental clearances.

2. Build on the mining of coal and iron. In fact, have a road map to stop imports of all metals and minerals that we have as natural reserves by March 2015.

3. Provide tax and interest rate incentive to enable the monetisation of gold holdings in hands of individuals/private institutions.

4. Increase import duties on all non-essentials that would force local manufacturing to wake up.

5. Get all power plants to start functioning to full capacity by March 2015.


Image: A villager carries a basket of coal scavenged illegally from an open-cast mine in the village of Jina Gora on February 11, 2012 near Jharia, India.
Photographs: Daniel Berehulak /Getty Images

How has the recent crash in Indian equities affected the mutual fund industry?

Do you see the Indian equity markets settling at a bottom any time before the new government takes shape by next year?

I think we are somewhere closer to the bottom. Markets have discounted low growth.

However, the market would trade in a narrow band as long as we don't see direct action by the government that would lead to us going back in the 7 per cent plus growth.

What would be your advice to mutual fund investors now that a lot of blue chip stocks are available at attractive valuations and mutual funds no doubt would be tempting to increase their stakes in these blue chips?

We always advise gradual investments in equities through a systematic investment plan.

In fact, equity investing has to be with a long term objective.

Investors should always look at their entire portfolio and concentrate on asset allocation.

How do you see Dr Raghuram Rajan's appointment as the next RBI governor?

We wish him all the best. He comes with excellent credentials and should bring in a new vision at the RBI.

Do you expect him to undertake bold measures that will help rein in inflation without impacting India's GDP growth?

He has an extremely difficult job on hand: Managing inflation, currency and aiding growth.