South Korean auto major Hyundai on Thursday showcased the new version of its popular SUV Creta which will be launched in March. 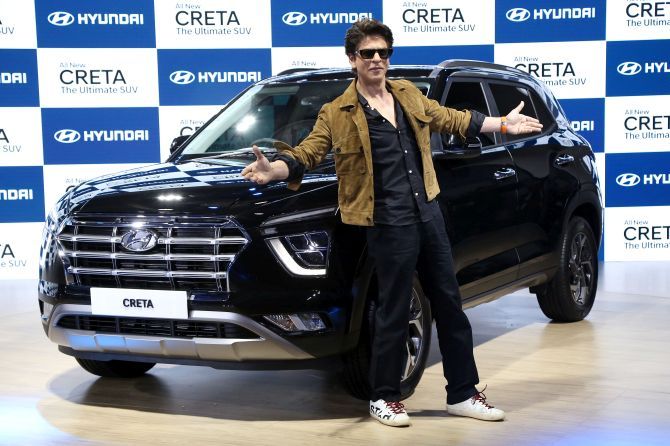 Unveiled by Bollywood actor Shah Rukh Khan, the second generation Creta has been given a more masculine and futuristic look, while being equipped with premium features, efficient powertrain and smart technology.

"The all-new Creta would be launched in March and we are sure that this product will offer great customer delight and supersede their aspirations and expectations," Hyundai Motor India Managing Director and CEO S S Kim told reporters.

He further said, "With over 6.5 lakh owners worldwide, Creta has become the most loved and admired SUV in the segment."

The new Creta will come with premium features like panoramic sunroof, LED headlamps, enhanced Bluelink 1.5, among others, the company said.

Speaking at the unveiling, Khan said while Creta was so successful, it was just not about numbers but was also about Hyundai bringing safety, newer technologies and driving pleasure to the customers.

In jest he said, in the last 22 years, two things have happened to him -- becoming a father and another becoming the brand ambassador of Hyundai.

"So I feel like I am the father of Hyundai in India," he quipped. 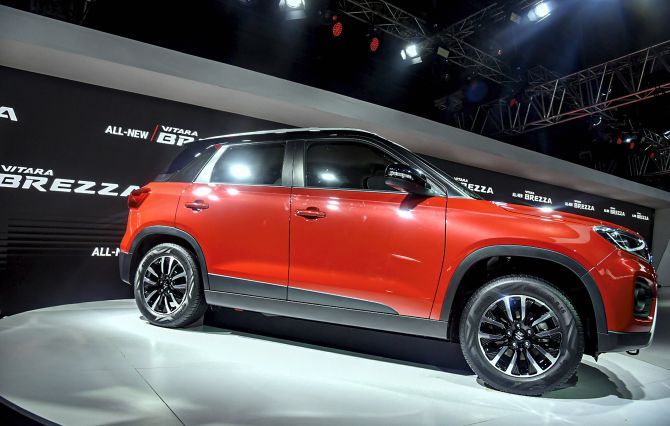 The company also commenced  booking of the vehicle at all its Arena showrooms across the country.

Maruti Suzuki has sold over five lakh units of the diesel-powered Vitara Brezza since its launch in the country in 2016, MSI Managing Director and CEO Kenichi Ayukawa told reporters.

"We are confident that the new Vitara Brezza will receive an overwhelming response from the customers," he said.

Utility vehicles continue to hold consumer interest, Ayukawa said, adding that with almost 35 per cent share of the industry, this segment is growing rapidly, he said.

The all-new Vitara Brezza will be available with 5-speed manual and 4-speed automatic transmissions.

As a standard feature, the automatic transmission version of the Vitara Brezza now comes equipped with the next generation Smart Hybrid system with Lithium-ion battery and hill hold assist feature. 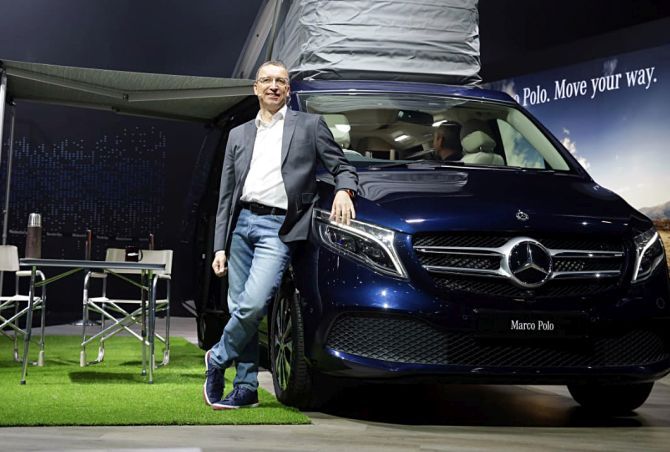 The new model, which takes its body design from the V-Class, comes in two variants -- Marco Polo Horizon priced at Rs 1.38 crore and Marco Polo tagged at Rs 1.46 crore.

The vehicle comes with camping features making it suitable for vacation and weekend trips.

"The V-Class and V-Class Elite pioneered the luxury MPV segment in India and have witnessed much success ever since their launch," Mercedes-Benz India Managing Director & CEO Martin Schwenk told reporters.

The company is now excited to expand the segment and launch the Marco Polo which is based on the V-Class, and create a new benchmark in the luxury MPV segment, he added.

The vehicle has room for up to four people to sleep and also comes with kitchen area with hob and two gas burners, sink and integral refrigerator and a folding table.

It comes with four seats as standard, with an option to extend to up to six seats and stowage options and tanks for fresh water as well as to collect waste water. 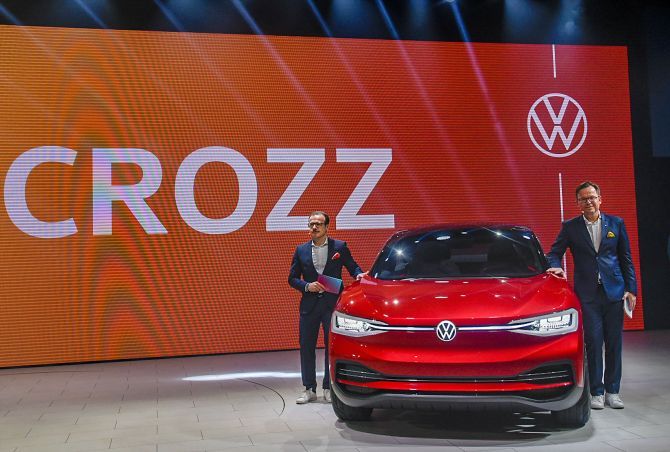 The company also showcased its Race Polo model at the Auto Expo.

He further said that along with Race Polo, the ID.CROZZ represents the company's innovative technologies and delivers on the company's "core DNA of safety, build quality and fun-to-drive experience".

He further said globally VW group is investing 33 billion euros in development of electric vehicles with one-third of it by the VW brand.

"The ID. family comprises a range of vehicles across segments, starting with the recently introduced ID.3 to the ID.SPACE VIZZION," Knapp said.

The ID.CROZZ is a cross of four door coupe and SUV with an electric drivetrain delivering power of 225kw with a top speed of 180km/hr, the company said.

The battery of the car can be charged to 80 per cent in 39 minutes covering a range of 500 km.

The Race Polo on the other hand is powered by a 1.8 litre petrol engine with a peak power of 230 hp mated with a six speed transmission. 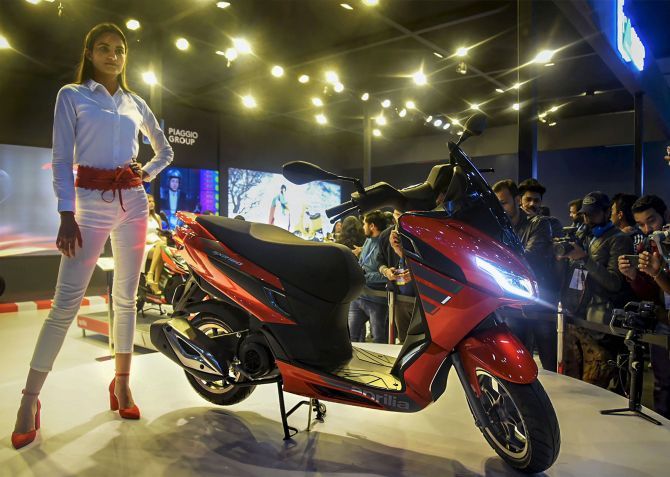 Italian two-wheeler maker Piaggio on Thursday unveiled its premium scooter Aprilia SXR 160, which has been designed specifically for Indian conditions.

The Aprilia SXR 160 would be launched in the third quarter of 2020 and booking would commence in August.

Piaggio, which is also working on India-specific futuristic electric mobility solutions, has also  showcased the European version of Vespa Elettrica at the Auto Expo.

Stating that electric mobility will grow at a fast pace in the country, Piaggio Vehicles India Managing Director and Chief Executive Officer Diego Graffi said, "India continues to remain a strategic market for us".

"In the past few years, we have seen the changing preferences in Indian consumers. Aligned to these changes, we are proud to introduce new products, which cut across categories and fulfil the needs of the customer," he added.

On being asked about electric mobility in India, he said the company has started with the commercials vehicles few month ago and plans to enter the market with customised products which are made in India.

He further added: "It would be fully designed in-house by Piaggio, including powertrain."

Piaggio said it would manufacture Aprilia SXR 160 at its Baramati facility in Maharashtra.

The company also has plans to scale up its dealership network to expand business in the country, Graffi said.

Piaggio also displayed the limited edition Vespa Racing sixties and Vespa 2020 facelifts, which are expected to launch in Q2, 2020.

The company plans to increase production of its e-scooters and bikes, Evolet Chief Executive Officer and Executive Director Prerana Chaturvedi said at the unveiling.

Evolet has three manufacturing facilities in Haryana, Hyderabad and Chennai, where it produces 13 products in various segments.

"We are excited to showcase our EV portfolio at the Auto Expo," Chaturvedi said.

The e-scooter, bike and three-wheeler are expected to be launched by June this year, she said.

Evolet is also working to increase its footprint across India through distributorship and dealership network.

Within five months of its launch, the company has 17 dealerships operational across 12 states, and will launch more outlets soon, Evolet said.

The aim is to have 200 dealerships pan-India within first year of launch, targeting sales of 2,000 units per-dealer-per-annum along with institutional sales and corporate sales to widen domestic base, the company said.

The company has also identified key export markets within Asia Pacific and the Middle East, and plans to start exporting products by the end of 2020, it added.

Source: PTI  -  Edited By: Saisuresh Sivaswamy© Copyright 2022 PTI. All rights reserved. Republication or redistribution of PTI content, including by framing or similar means, is expressly prohibited without the prior written consent.
Print this article 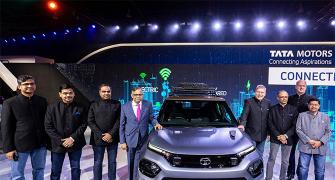 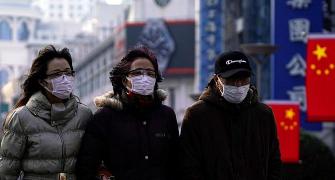 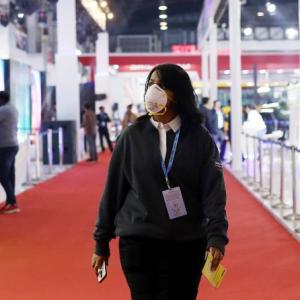 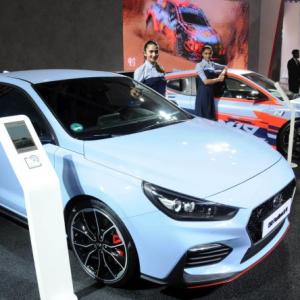