The IT major also revised its current fiscal constant currency revenue guidance upwards to 12.8-13.2 per cent.

India’s  second-largest software firm Infosys on Thursday reported a 6.6 per cent growth in its consolidated net profit at Rs 3,465 crore (Rs 34.65 billion), a better-than-expected set of numbers, for the October-December quarter of the current fiscal.

The Bengaluru-based firm's net profit stood at Rs 3,250 crore (Rs 32.50 billion) in the corresponding period a year ago.

"Alongside grassroots innovation, we continue to see growing adoption of our Aikido services, bringing the power of intelligent systems, automation and software to amplify the skills and imaginations of our people," Vishal Sikka, CEO and managing director, Infosys said.

He added this combination helped the company deliver encouraging results despite the traditional seasonality of the quarter and the additional headwinds, and will strengthen the execution of its strategy towards consistent profitable growth.

Reacting to the results, Infosys shares surged 4.08 per cent in early morning trade to Rs 1,126.55 apiece.

"We have been able to navigate the quarter better than our earlier expectations. We will continue to focus on enhancing operational efficiency through multiple levers in the coming quarters," Infosys CFO M D Ranganath said.

In dollar terms, Infosys posted 0.4 per cent jump in net profit to $524 million, while revenue was up 8.5 per cent to $2.4 billion in the third quarter.

The company has shown a stellar performance during the quarter despite traditional seasonality and Chennai floods.

Infosys said that North America accounted for 62.5 per cent of its revenues, while Europe and India contributed 23.2 per cent and 2.8 per cent, respectively. Rest of the World (RoW) region contributed 11.5 per cent to the quarter's revenues, it added.

During the quarter, Infosys added 75 (gross) clients taking the number of active clients to 1,045. 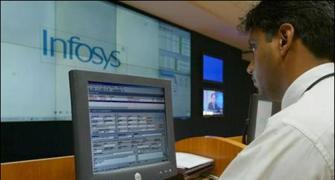 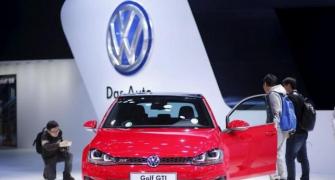 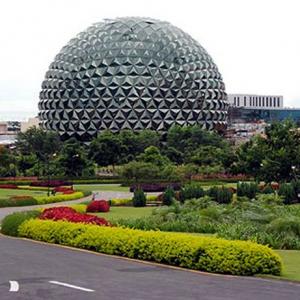