Sitharaman given a live demo of GST glitches

The aim of the exercise was to further simplify GST forms and make the filing process more user-friendly, the finance ministry said in a tweet, reports Dilasha Seth. 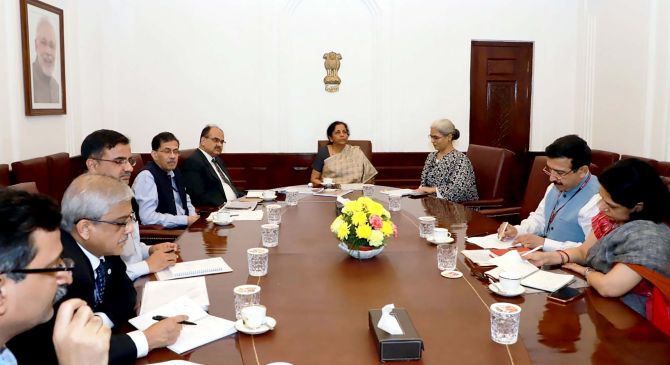 With the government facing severe revenue stress, Finance Minister Nirmala Sitharaman on Saturday met representatives of small and medium enterprises, chartered accountants, retailers, and independent professionals to iron out concerns related to goods and services tax (GST) compliance. In a live demonstration of sorts, the representatives attempted to file actual returns during the meeting to highlight their concerns.

The aim of the exercise was to further simplify GST forms and make the filing process more user-friendly, the finance ministry said in a tweet.

Sitharaman asked the revenue department to carry out a similar exercise across the country on December 7 for the new return forms to come into effect from April 2020. That would mean commissioners across circles would meet select individual GST return filers to respond to their queries and resolve issues. Saturday’s meeting was attended by officers from the Department of Revenue and GST Network (GSTN) -- the information technology backbone for GST.

“The FM decided that every commissioner of every circle should invite assessees with accountants who will actually file returns on a real time basis in front of the officer to understand the problems,” Revenue Secretary Ajay Bhushan Pandey told reporters after the meeting.

The new GST return is available on the GSTN portal for trial and 85,000 have been filed so far on a voluntary basis.

The FM has sought regular interactions between GSTN and the Central Board of Indirect Taxes and Customs (CBIC) to help improve the interface for users. GST collections have been dismal with revenue falling short of the Rs 1-trillion target for the third straight month in October. It was in fact 5.3 per cent lower than that in the corresponding month last year at Rs 95,380 crore.

"As compared to the value-added tax regime, the compliance rate is much better. But there is a big scope for improvement," said Pandey.

Earlier in the day, stakeholders, in their meeting with the FM, tried filing the summary return form GSTR 3B, outward supply form GSTR1, annual return form GSTR9 and the reconciliation statement 9C, besides raising issues pertaining to GST refunds.

"Many of the issues that came up pertained to making amendments and corrections in a more convenient manner, issue of credit or debit notes. Some wanted the facility of downloading GSTR 2A return data in a custom range as against only month-wise available now," said Pandey.

They also highlighted the prevailing confusion where officers were asking for physical copies of invoice of items shown in the GSTR2A. "We told them that it was not correct on the part of officers to ask for physical invoices when data has been captured in GSTR2A.

GSTR 2A is a purchase-related tax return that is automatically generated for each business by the GST portal . When a seller files his GSTR-1, the information is captured in GSTR 2A.