In an unprecedented move, the Reserve Bank has temporarily barred HDFC Bank from launching digital banking initiatives and issuing new credit cards after taking a serious view of service outages at the country's largest private sector lender over the last two years. 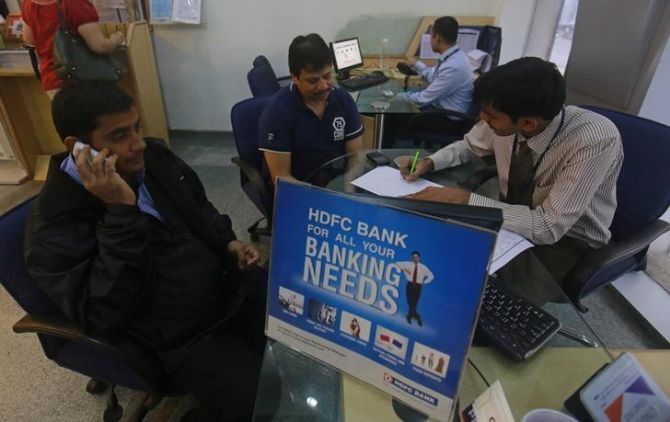 IMAGE: Kindly note that this image has been used for representational purposes only. Photograph: Danish Siddiqui/Reuters.

The Reserve Bank of India's order came on Wednesday, days after the last instance of service outage across its digital banking channels, including internet banking, mobile banking and other payments. The outage, which happened on November 21, had severely inconvenienced customers, the bank informed the exchanges on Thursday.

In December 2018, the bank's new mobile application crashed within hours of its launch in what was attributed to the inability of the servers to handle the heightened traffic. Exactly a year later, its online channels were down during the salary time. After the second incident, the RBI had said that it was looking into the glitches.

Usually, the RBI slaps monetary penalties on erring entities that comes under its regulatory framework.

On Thursday, HDFC Bank said the latest incident on November 21 was a result of a power failure in its primary data center.

"The RBI has advised the bank to temporarily stop all launches of the digital business generating activities planned under its programme Digital 2.0 (to be launched) and  other proposed business generating IT applications, and sourcing of new credit card customers," the bank informed the stock exchanges in a filing.

The central bank has also asked HDFC Bank to ensure that its board "examines the lapses and fixes accountability". This is the first major challenge faced by its new chief executive Shashidhar Jagdishan, who took charge in late October.

The bank is the largest issuer of credit cards and had 1.49 crore customers as of September this year while on the debit cards front, it had 3.38 crore customers.

An HDFC Bank official said existing users will be able to continue using the services and added that security-related updates for mobile banking apps will be the only addition allowed till the RBI order is in force.

>Details of the timeline for which the order will be in force or targets/ milestones asked to be achieved by the bank before it goes back to business as usual, were not immediately known. More details on the yet-to-be-launched Digital 2.0 programme were also not available.

After every instance of outage, HDFC Bank has seen many of the customers venting their ire on online mediums. About the November 21 outage as well, there were users complaining about instances like being stuck at merchant establishments as payments were not going through.

Given the spurt in alternative channel usage for undertaking banking and payment activities, HDFC Bank's peers also face similar difficulties. Its larger rival SBI had to face ire of customers earlier this week, with complaints of transaction failures. The SBI had faced technical glitches the previous month as well.

In the filing on Thursday, HDFC Bank said it has been its endeavour to provide seamless digital services and added that it has been "taking conscious, concrete steps to remedy the recent outages on its digital banking channels".

The bank also said these measures will not "materially impact its overall business".

Shares of the bank were trading nearly two per cent lower at Rs 1,382 on the BSE in afternoon trade. 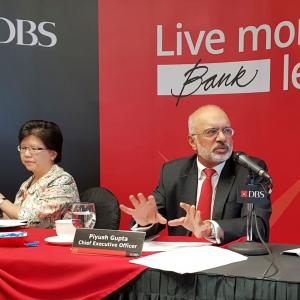