RBI may drop dividend next year

The Malegam committee on the RBI’s capital adequacy had suggested that the RBI must move away from its methodology to calculate the foreign exchange gains to a weighted average cost-based valuation method.

Central bank may done away with provisioning requirements, to enable higher transfer of surplus in the 2017-18 fiscal, analysts say.

The Reserve Bank of India (RBI) may have changed its valuation methodology for its foreign exchange gains generated through interventions, as well as done away with provisioning requirements, to enable higher transfer of surplus in the 2017-18 fiscal, analysts say.

The methodology change has been long time coming, but could have been completed this year.

The Malegam committee on the RBI’s capital adequacy had suggested that the RBI must move away from its methodology to calculate the foreign exchange gains to a weighted average cost-based valuation method.

Analysts contend that this may have benefitted the RBI by at least Rs 20,000-21,000 crore, considering the rupee fell sharply last year, necessitating the central bank to intervene.

When rupee depreciates, the RBI can sell less dollars, thereby gaining on its operations. The opposite happens when the rupee strengthens.

Besides, with the capital framework in place, which says the minimum “realised equity” (RE), or contingent fund, should be kept at 5.5 per cent of total assets, the need for provisioning can be done away with.

This should free up a substantial fund as surplus for the government.

The amounts taken together, along with its normal profit of Rs 50,000-60,000 crore, may explain how the RBI came up with a record surplus transfer amount of Rs 1.23 trillion, analysts say.

However, it is unlikely that the government would continue to get heavy dividend from the RBI year after year.

“Based on the new ECF framework, it is likely that the RBI will have to add to its available RE buffer with a growing balance sheet, in the coming years.

"This would mean that the net income would have to be appropriated to RE first to maintain at least 5.5 per cent of the balance sheet size, before arriving at the transferable surplus.

"This means the dividend transfer to the government could be lower as a result,” said Gaurav Kapur, chief economist, IndusInd Bank.

The RBI doesn’t even have the wriggle room as the board has accepted to keep realised equity, or contingent fund, has accepted the lowest limit, from the suggestion to keep the reserves at 5.5 per cent to 6.5 per cent of the balance sheet.

Kapur elaborates how the dividend could be lower going forward, and that the heavy transfer could be a one-time affair.

RE before transfer of excess capital was 6.8 per cent of the balance sheet size, or about Rs 2.75 trillion.

Therefore, to maintain RE level of 5.5 per cent of the balance sheet size - the lower level of the contingent risk buffer - the RE should increase to Rs 2.4 trillion in June 2020.

“This implies before transferring any surplus to the government from its net income in the next year, the RBI will have to increase RE level by Rs 16,878 crore, according to the guidelines of the Jalan committee,” Kapur said. 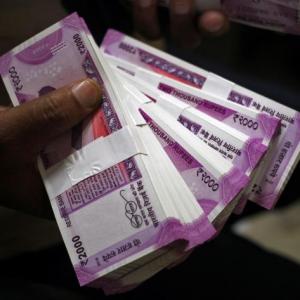