If successful, this will be the first major instance in many years where a private sector lender will be bailed out using public money, with the first instance being Global Trust Bank's amalgamation with Oriental Bank of Commerce in 2003, which was followed by IDBI Bank's takeover of United Western Bank in 2010. In a rare move, capital-starved Yes Bank was on Thursday placed under a moratorium, with the RBI capping deposit withdrawals at Rs 50,000 per account for a month and superseding its board.

Yes Bank will not be able to grant or renew any loan or advance, make any investment, incur any liability or agree to disburse any payment.

The Reserve Bank of India assured Yes Bank depositors that their interest will be fully protected and that there is no need to panic.

The regulatory actions, undertaken by the RBI and the government, came hours after finance ministry sources confirmed that SBI was directed to bail out the troubled lender.

For the next month, Yes Bank will led by the RBI-appointed administrator Prashant Kumar, an ex-chief financial officer of SBI.

The country's financial sector is already reeling under a spate of setbacks, starting with the high quantum of dud assets at over Rs 10 lakh crore, their slow-paced resolutions despite legal teeth through bankruptcy laws, scandals at non-bank lenders like IL&FS and DHFL, and also fraud at cooperative lender PMC Bank.

The last lender to be placed under a similar action was PMC Bank in September last year. While the withdrawal limits have been increased over time to Rs 1 lakh now, many PMC Bank depositors are still in the lurch.

There is no provision to handle insolvencies of commercial banks, and the raft of actions come even as the government is working on the FRDI (financial resolution and deposit insurance) Bill.

Just like PMC and DHFL, the RBI superseded the board of Yes Bank for a period of 30 days "owing to serious deterioration in the financial position of the bank".

The government took the decision of placing the bank under moratorium on an application made by the RBI, a gazette notification signed by Amit Agarwal, joint secretary in the finance ministry, said.

The RBI had appointed former deputy governor R Gandhi to the bank's board last year amid the leadership turmoil, caused by the central bank's August 2018 action asking co-founder and chief executive Rana Kapoor to step down by January 2019 on corporate governance concerns.

Immediately on joining, Gill identified hidden stress of over Rs 10,000 crore, providing for which eroded capital buffers. The bank has been struggling to execute a capital raising plan for the last six months.

Yes Bank's core equity tier-I ratio had slipped to 8.7 per cent as of September.

The bank had pushed its December quarter results announcement to March 14, citing hindrances it may pose to the capital raising plan.

"The Reserve Bank came to the conclusion that in the absence of a credible revival plan, and in public interest and the interest of the bank's depositors, it had no alternative but to apply to the Central Government for imposing a moratorium under section 45 of the Banking Regulation Act, 1949," an RBI statement said late Thursday evening.

It said the bank management had indicated that it was in talks with various investors and was also engaged with a few private equity firms for exploring opportunities to infuse capital.

"These investors did hold discussions with senior officials of the Reserve Bank but for various reasons eventually did not infuse any capital.

"Since a bank and market-led revival is a preferred option over a regulatory restructuring, the Reserve Bank made all efforts to facilitate such a process and gave adequate opportunity to the bank's management to draw up a credible revival plan, which did not materialise," the central bank said.

In the meantime, Yes Bank was facing regular outflow of liquidity, the apex bank said, justifying its actions.

As part of the moratorium directions, Yes Bank will not be able to grant or renew any loan or advance, make any investment, incur any liability or agree to disburse any payment, the RBI said.

However, for purposes like marriage, and health emergencies, exceptions can be made, the RBI said.

The bank will also be able to pay salaries to its over 20,000 employees and also rents, it clarified.

While Yes Bank chief executive Ravneet Gill was not reachable, calls to Shagun Kapur Gogia, the daughter of the late founder-chairman of the bank Ashok Kapur, did not elicit any response. Her family is the single largest promoter group with 8.3 percent stake in the bank.

The actions came hours after reports of the government directing a consortium of largest lender SBI and life insurance behemoth LIC to bail out the bank emerged.

If successful, this will be the first major instance in many years where a private sector lender will be bailed out using public money, with the first instance being Global Trust Bank's amalgamation with Oriental Bank of Commerce in 2003, which was followed by IDBI Bank's takeover of United Western Bank in 2010.

The news of a bailout packaged had sent the Yes Bank stock soaring. It closed 25.77 per cent up at Rs 36.85 apiece on the BSE.

However, brokerages were not enthused, and a couple of them pegged the value of each stock at Re 1 if such a bailout were to happen.

Terming it as a "quasi sovereign bailout", J P Morgan said, "We believe forced bailout investors will likely want the bank to be acquired at near zero value to account for risks associated with the stress book and likely loss of deposits".

Earlier this year, SBI Chairman Rajnish Kumar had said the troubled bank will "not be allowed to fail". He had also suggested that rival Kotak Mahindra Bank is best suited to take over Yes Bank. 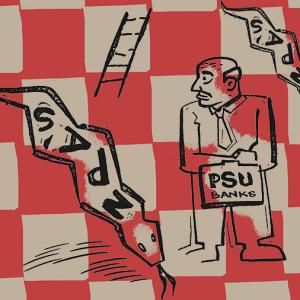