These 3 banks are top picks of most brokerages and expected to post strong earnings growth and healthy return ratios over the next 2-3 years.

Most public sector bank (PSB) stocks, which have been beaten down or underperformed broader markets over the past couple of years, could witness a reversal in their fortunes.

These banks are surrounded by a host of concerns regarding continued high stress on asset quality, weak capitalisation, especially in complying with Basel-III requirements and slowing credit offtake, in sync with a weakening economy.

After the 0.5 per cent rate cut by the Reserve Bank (RBI) till date in 2015, it is clear the economy and the sector are in a cycle of falling interest rates, even if these are passed on with a lag.

This augurs well for highly leveraged companies, as a lower outgo on interest costs improves their ability to service debt. Lower interest rates generally also lead to higher economic growth, thereby rubbing off positively on most companies. Which favourably impacts the asset quality of most banks.

Importantly, policy action to revive economic growth and to clear the hurdles curtailing individual sectors (through coal auctions, amendments to land acquisition law, etc), among others, will benefit PSBs the most, given their higher exposure to the core economy and infrastructure projects.

In this backdrop, analysts are turning positive on PSBs, which they also believe will lead the rally in banking stocks. “Improvement in operational performance is likely to drive the next leg of re-rating of PSBs, with structural reforms taking the process further. Our top picks in the PSB space are State Bank of India (SBI), Punjab National Bank (PNB) and Union Bank,” say analysts at Motilal Oswal Securities. 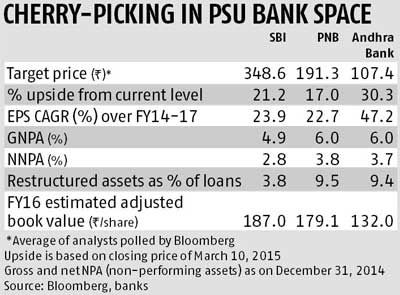 In a strategy report after the Union Budget proposals, Kapil Gupta of Edelweiss said, “Early cyclicals remain the best bets. We are getting more biased towards PSBs and are evaluating higher weightages.”

However, don't expect a V-shaped recovery soon. For one, the forbearance for restructured loans allowed by RBI is closing this month.

Except for select sectors, all loans restructured from April will be treated as non-performing assets (NPAs), raising the provisioning burden on banks. Second, the economic recovery is more likely to be back-ended, starting the second half of FY16, say analysts.

So, the gains for banks will be gradual. Analysts are also advising that investors could use market volatility/correction as an opportunity to accumulate such stocks.

Vaibhav Agrawal, vice-president, Angel Broking, says: “PSB stocks might remain under pressure in the very near term, as economic recovery and easing of asset quality pressures will happen gradually. We should witness meaningful improvement from the second half of FY16 in both earnings and stock performance. Overall sentiment, though, will keep improving for PSBs. The current valuations are not demanding in terms of historic price to book ratios. Thus, we are positive on PSBs over the next 12-18 months. We like a number of these right now, including SBI, Canara Bank and Allahabad Bank.”

Here are three PSBs, shortlisted on some crucial parameters. Compounded annual growth (CAGR) of 15 per cent and above in FY14-17 is one and a strong potential upside from the current price is another (based on latest Bloomberg data). Plus, a healthy capital adequacy ratio and relatively stable asset quality.

SBI remains a favourite of most brokerages in the PSB segment. Being the country's largest is not the only attraction. Operationally, too, SBI is taking measures to boost performance. Importantly, its asset quality performance over the past two quarters was relatively stable.

Its asset quality checks at the time of origination, lending and repayment have helped. Further, it did a complete overhaul of the troubled small and medium enterprises (SME) and agriculture segments. It is now relaunching products in this segment, with a stringent check on asset quality parameters.

The bank has focused on reducing its cost to income ratio and is pushing digital banking across all products and services. These initiatives will drive both revenues and profitability.

At a 10 per cent tier-I capital ratio, the bank is also better positioned than most peers to gain from the expected economic recovery. A focus on profitable growth and a strong liability franchise (largely low-cost retail deposits) are other key strengths.

SBI's earnings are expected to grow at a 24 per cent CAGR over FY14-17 and the average target price of analysts stands at Rs 349, an upside of 21 per cent. The bank's latest move to raise Rs 15,000 crore through a follow-on-offer could see some pressure in the counter, providing a good entry point for investors. It will also boost its capital adequacy significantly.

PNB is relatively more levered to economic recovery, given its higher exposure to the infrastructure, iron and steel sectors. While the bank continues to witness high asset quality stress, analysts believe this situation will improve as recovery kicks in. The recovery, though, will be gradual, as the management expects stress levels to be high in the next two quarters.

The bank is adopting a cautious approach while lending and focusing on retail segments to drive credit growth at minimal asset quality risks.

PNB’s tier-I is healthy at 8.5 per cent and government fund infusion will strengthen this. “PNB has been derisking its asset portfolio through increasing retail assets, consolidating its operating expenses and focusing on recoveries, through which it would be able to achieve a stable return on assets of 0.8 per cent by FY16 against 0.5 per cent currently”, says Jignesh Shial of IDBI Capital.

PNB’s earnings are estimated to grow by 22 per cent annually over the next two years.

The earnings are likely to grow by 47.2 per cent over FY14-17 on the back of higher recoveries, ironing out of asset quality issues in agriculture and an improving macro situation. Having about 60 per cent of its branches in Andhra and Telangana, it will benefit significantly from the improving political and economical environment in these states.

The management expects asset quality to improve significantly in the next two quarters as the farm loan rollover in these states is completed. In addition to expanding its branch network, the bank has launched an e-banking zone in Bhavanipuram, Vijayawada, and plans to extend it to other branches, which should help expand business at a lower cost.

The average target price on this stock stands at Rs 107, a potential upside of 30 per cent. 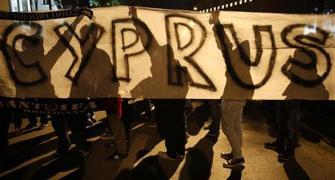 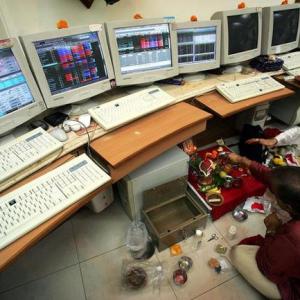