News
Business
Movies
Sports
Cricket
Get Ahead
Money Tips
Shopping
Sign in  |  Create a Rediffmail account
Rediff.com  » Business » How to learn to live with inflation

How to learn to live with inflation 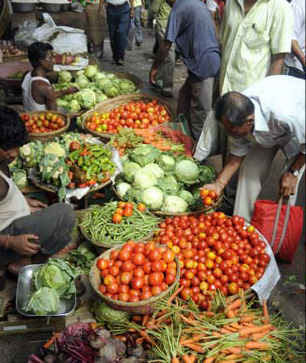 Life is like a treadmill, people complain. Once you get on it, you cannot easily jump off. Plus, the speed keeps increasing and you need to walk faster to just stay on it. It's tiring.

Many feel the same with finances. The expenses are mounting and those items that have been there are becoming more expensive. The salaries seem to have increased; but that has not brought much cheer.

That's because inflation has bitten off more than the increase afforded by the income increase. Inflation is a big bugbear today. It is ironical when government publishes figures showing comparatively low numbers.

But inflation is over the last period; if tomatoes have gone up to Rs 30 and has stayed the same over the period, it means zero per cent inflation. But, your cost has gone up for good. That is what has happened today on the entire range of food items.

Inflation affects everyone. The effect can be different on different classes of people. Food inflation has the highest impact on the lower sections of society.

For instance, if a family earning Rs 10,000 per month is spending Rs 5,000 every month on food and the price of food articles goes up by 10 per cent, then their food expenses now occupy 55 per cent of their earnings.

As opposed to that, another earning Rs 50,000 pm and spending Rs 15,000 every month (three times more than the other family) finds that with the 10 per cent increase, the food expenses will just increase from 30 to 33 per cent.

This impact is compounded by another fact. The low income earner may not be in a position to take advantage of bulk purchases in view of the lower availability of surpluses to fund such purchases. A high income earner can do so and lower his cost of commodities.

Inflation is not the same across the board. On some items, it is low or negligible. On telecom expenses, for instance, inflation tends to be low. On white goods and electronic items, there is negative inflation.

Some 15 years earlier, a top-end, 21-inch TV set used to nudge Rs 20,000. Now, a good one can be had for around Rs 10,000. It feels great to know that some items like this have actually come down. But you don't buy a TV or washing machine everyday.

Whereas, on medical, education and fuel charges it tends to be high, in the region of eight to 10 per cent yearly. One may be unaware of it till one receives a jolt. People do not realise the extent of inflation on medical expenses.

Many do not see the need to have a health insurance policy. Medical expenses can clean-out one's savings and are probably the biggest threat one faces in life. Similarly, education inflation is humongous.

The fees have reached stratospheric levels for professional courses. It certainly appears on its way to the upper reaches in the years to come. Parents with children do not always realise the full magnitude of the cost increase in education.

They also hope their child gets into a government-funded institution (which today are inexpensive ) and make inadequate provisions.

When they come to the point of higher education, they are forced to make a much higher allocation, many times what they'd envisaged, which compromises their interests in other areas.

Not realising the threat of inflation and not being prepared for it is a bigger threat than inflation itself. That is why in financial planning it is treated with a lot of respect!

When we project expenses over time, inflation over the years will be the one that will determine whether goals are going to be met or not. Especially essential for retirement planning.

When income stops and there are only expenses, inflation can be cruel. It is doubly cruel today, as the returns have come down.

Since most investors do not take into account the inflation factor at all, they continue investing in debt instruments, that give moderate returns, not realising there is an actual erosion in the real value of their money.

It is an accepted fact that when a person retires, they should invest in debt instruments only. That is incorrect. These days, the retirement years can stretch up to three decades and their money-pile needs to last that long. Unless a person is supremely endowed and well-funded, investing only in debt funds is the sure route to end-up pan handling in the later years.

It is always suggested that some portion of the investments be allocated to equity-oriented investments. These offer better returns and tax-free (after holding for 12 months).

So, inflation is bad, right? Not always. If inflation were not there, people would postpone purchases, as in future it may get cheaper. That cycle would cripple the economy and fold-up businesses. It will drive up unemployment, reduce purchasing power, which will drive prices even lower.

That is a recipe for disaster. Ask the Japanese. They have seen that for the last couple of decades. It is better to be on the treadmill and complain of exhaustion than experience your world crumble before your eyes.

The writer is a certified financial planner.