News
Business
Movies
Sports
Cricket
Get Ahead
Money Tips
Shopping
Sign in  |  Create a Rediffmail account
Rediff.com  » Business » How to take action against an errant builder

How to take action against an errant builder

If the developers continue to express inability to pay, buyers should file a petition in the SC and request it to initiate proceedings under Article 142 of the Constitution 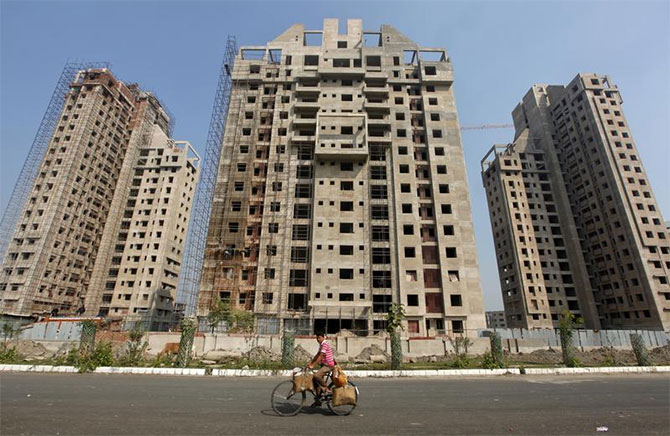 During proceedings in the Supreme Court recently, Parsvnath and Unitech expressed their inability to refund home buyers for not handing over possession of flats.

While the apex court has asked Unitech to deposit the principal money that buyers had paid, in the case of Parsvnath, the court is examining the case for the next course of action.

Legal experts say if the developers continue to express inability to pay, buyers should file a petition in the SC and request it to initiate proceedings under Article 142 of the Constitution.

“The apex court has special powers and it can initiate similar proceedings that it did in the case of Sahara,” says Hitesh Jain, senior partner, ALMT Legal Partners.

Under Article 142, the Supreme Court has the authority to issue any order for doing complete justice. Lawyers feel this will also set a precedence and discourage developers from taking buyers for a ride.

“This will not only help buyers get back their money, there will also be proper investigation that will bring out whether the losses are for real or the builder had siphoned off the money,” says Abhishek Khare, founder and managing partner, Khare Legal Chambers.

Lawyer Ashwarya Sinha, who represented buyers in the Unitech case, explains that if a developer does not follow court orders, there could be contempt of court proceedings initiated against the developer. For example, if Unitech is unable to pay by the deadline, the court can also pass a decree to recover the money.

“In this case, the assets of the developer will be sold to realise the funds,” says senior SC lawyer Jayant Bhushan, who also represented buyers in the Unitech case.

While the buyers will receive relief from the apex court, Khare says the affected parties can also initiate criminal cases simultaneously against the builder. But, these take a long time as such cases have to be initiated in lower courts and the builder is bound to take it to the next level.

Legal experts say there could be different reasons for the developer to tell the court that he doesn’t have money.

“While it could be genuine, it can also be said as builders are scared that if a small group of buyers get relief, it will lead to all affected parties in the particular projects rushing to court to get similar compensation,” says Bhushan.

Developers also say this to reach a settlement with the buyers that will give them time to construct the property or make payment later. But, legal experts say settlement should be ruled out as many delayed projects have either not seen any construction activity or they are at the initial stages.

If you are an affected party, don't just sit on the fence. Lawyers say buyers should start approaching the consumer forum for relief.

“They can also approach the apex court to join the current proceedings. But, it’s up to the court to allow other affect parties to join,” says Sinha.

“It’s not that developers don’t have money. There have been many cases in the past where the Income Tax department raided the developer and found money was siphoned off,” says Sanjay Sharma, managing director at QuBREX, a real estate consulting firm.

He says many developers in Delhi have got land at cheap rates. For construction, they take a loan. Their overhead cost is mostly employees’ salaries and advertising. They have taken 80-90 per cent of the flat cost from the buyers. “Where has the money disappeared?” questions Sharma.