At present, it is trading at around $1,004 an ounce in the international market, about $150 cheaper than gold 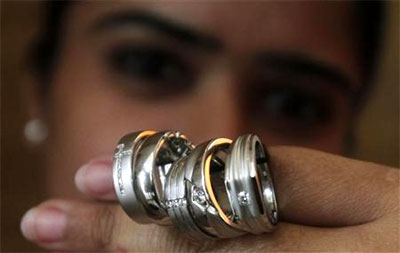 If you planning to buy jewellery, try platinum. Traditionally, platinum has always commanded about 40 per cent more premium than gold. In 2007, platinum was sold at double the price of gold. But in the wake of worries about Chinese growth and more recently, the emissions scandal at Volkswagen, the prices of the metal internationally touched its seven-year low in September.

At present, it is trading at around $1,004 an ounce in the international market, about $150 cheaper than gold. In India, however, it's about Rs 1,000 more expensive than the yellow metal per 10 grams. The prices are also lower because of the increase in supply after discovery of new mines.

"The price of platinum is currently soft and this is a bit unreal, given the demand and supply. Global economy and sentiments seem to have affected the prices," says Vaishali Banerjee, manager - India, Platinum Guild International, a body funded by leading platinum producers and refiners.

In India, consumers can only buy platinum in the form of jewellery. Rajiv Popley, director of Mumbai-based jewellery firm Popley & Sons, says within jewellery too, the wedding ring or band accounts for about 70 per cent of the market. That's because typically, a wedding ring has diamonds studded in it. As platinum is harder than gold; it holds diamonds better.

"When the yellow metal is used as a set or a base, diamonds tend to get a yellow tinge. With platinum, diamonds' brilliance, fire and scintillation are augmented," says Popley.

But the prices and distribution of the metal are tightly regulated by the producers, says Popley. It is sold more like a brand than a metal. It is also not traded on any commodity exchange.

Due to these factors, it's not a product that's price-sensitive like gold. Whenever a buyer goes to a retailer for gold jewellery, they get the break-up of the gold price, which fluctuates every day, and making charges. In case of platinum the prices, the jewellery is always sold as a complete set. Jewellers change price only if there's any significant fluctuation of four-five per cent.

However, the consumer gets a buyback certificate from the manufacturer and the jeweller. "They can get 80 per cent of the purchase value any time they want to return the jewellery," says Popley.

Due to the lack of break-up of the price, some feel buying platinum is not as transparent as gold. "Platinum prices are dependent on the demand from the auto sector. If India's economy picks up, and car sales zoom, the price can go back to being 30-40 per cent higher than gold," says Keyur Shah, CEO, Muthoot Precious Metals Division and former director at World Gold Council. He feels the metal has a lot of potential for investors but there are no investment products, such as coins or bars, available in the market. There's also no resale market, he adds.

Platinum is best-suited for those looking for precious metals, other than gold, for jewellery.