President Barack Obama's India visit has been successful in creating thousands of jobs for Americans; which was one of the major factors for the shellacking received by his Democratic party in mid-term polls, US media said on Sunday.

"Days after reaping the political consequences of a poor economy, President Obama announced a set of measures Saturday to increase trade between the United States and India, his first stop on an Asian tour focused largely on promoting economic growth at home," The Washington Post said.

"Obama's remarks placed the US economy at the centre of his first extended foreign trip this year, and highlighted the political challenge he faces in promoting economic policies abroad that divide Americans at home, including many within his own party," the daily said.

"Eager to fend off any criticism that he's globe trotting just days after a disastrous midterm election, President Obama unveiled about $10 billion in new contracts for US exports to India on Saturday as he launched an aggressive push to show his trip to Asia will deliver jobs back home," CNN said.

Even before a midterm election dominated by concerns about stubborn unemployment, the image-conscious Obama White House designed this trip as a job-generator, the CBS news reported.

"As the administration sought 'deliverables', it packaged a series of trade deals, including many that were already in the pipeline. The White House said the agreements dominated by aircraft sales would create about 54,000 jobs at home," it said.

Any improvement in the dismal jobs picture is welcome but economists have estimated it will take 300,000 new jobs each month to have an impact on an unemployment rate hovering around 10 per cent.

"The White House is in the midst of a post-election outreach to business, hoping to thaw chilly relations with business leaders and organisations. White House officials brought forward the leaders of Pepsico, Honeywell, AES Corp., and the McGraw-Hill Companies to vouch for the sincerity of the US president's efforts to promote US exports in India and other parts of the growing Asian market," The Wall Street Journal said.

"President Obama, fresh off a stinging electoral defeat for Democrats, opened a 10-day tour of Asia on Saturday with a courtship of corporate America, including private meetings with American business executives... and an announcement that he will lift longstanding restrictions on exports of closely held technologies to India," The New York Times reported. 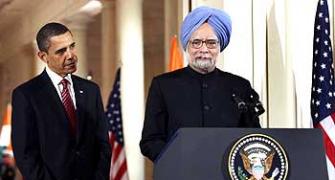