An insatiable quest for personal propaganda, event management and attractive slogans has made Modi sovernment as 'catch headline government' 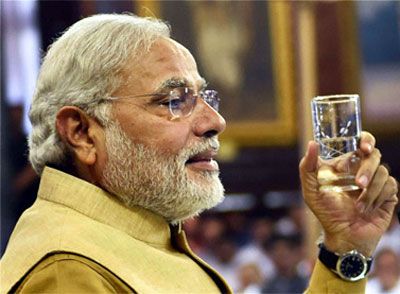 Prime Minister Narendra Modi's 'Make in India' drive remained a hollow initiative as his government has failed to address the challenges of global competitiveness, senior Congress leader Ajay Maken said on the eve of the BJP-led NDA government's first year in office.

"Despite pitching 'Make in India' initiative at every opportune moment, it remains just a slogan," Maken said while addressing a press conference in Mumbai.

"The Centre has done nothing to address the challenges of building global competitiveness in manufacturing demands, restructuring of inverted tax structure, levelling the high costs of inputs and resolving crucial logistics issues," he said.

Accusing the Modi government of being financially imprudent, the senior spokesperson said the exports have reduced to $23.88 billion in January 2015 as against $26.89 billion a year earlier.

"Another retrograde move reflecting lack of understanding of economic issues is the proposed 1 per cent inter-state tax in the GST bill. This goes against the spirit of GST and will be counter productive to 'Make in India'," he said.

Making light of Modi consulting economists and industry-watchers about a new economic blueprint for India after assuming power, Maken said, "A year has since passed by and the economic blueprint has turned out to be a 'Headline Management Print'.

An insatiable quest for personal propaganda, event management and attractive slogans has made Modi sovernment as 'catch headline government' rather than 'catch investment government', he added.

He said the average prices of tur dal, urad dal, moong dal, masoor dal and onion has seen a rise of 15 to 28 per cent in the last one year.

"Exports have fallen by over 11 per cent in 2015 as compared to last year. Growth in eight core industrial sectors like coal, crude oil, natural gas, refinery, fertiliser, electricity, steel is down to 3.5 per cent in 2014-15," Maken said.

He said the first year of Modi government saw creation of only 17.5 lakh jobs as against the promise of creating two crore jobs a year.

Maken demanded that the government scrap the concept note dated March 23 by Telephone Regulatory Authority of India (TRAI) on "Over the Top" internet usage and enact a legislation for a policy direction to net neutrality.