News
Business
Movies
Sports
Cricket
Get Ahead
Money Tips
Shopping
Sign in  |  Create a Rediffmail account
Rediff.com  » Business » Modi govt has been slow to match its rhetoric in reforms: US

Modi govt has been slow to match its rhetoric in reforms: US 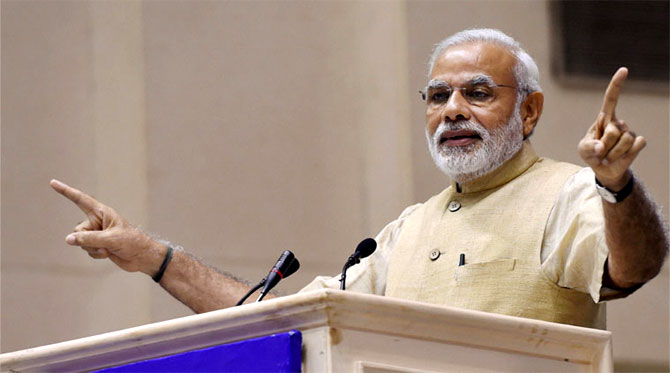 Underlining that India's 7.5 per cent growth rate may be "overstated", the US has said the Narendra Modi government has been "slow" to match its rhetoric in economic reforms even as it appreciated measures taken by it in areas like bureaucracy and easing foreign direct investment restrictions.

Noting that many of the reforms it did propose have struggled to pass through Parliament, the report "Investment Climate Statements for 2016" said that this has resulted in many investors retreating slightly from their once forward-leaning support of the Bharatiya Janata Party-led government.

For example, the government failed to muster sufficient political support on a land acquisition bill in Parliament – all but ending its chance of passage in the near term - and is still negotiating with opposition parties the details of a Goods and Services Tax Bill, which if not watered down in negotiations, could streamline India's convoluted tax structure and provide an immediate boost to GDP.

"Ostensibly, India is one of the fastest growing countries in the world, but this depressed investor sentiment suggests the approximately 7.5 per cent growth rate may be overstated,” said the report produced by the Bureau of Economic and Business Affairs of the State Department.

Recognising that the gains from a massive, positive terms-of-trade shock due to lower oil prices that India has benefited from may not be repeated in the current global economic environment, the Finance Ministry has slightly reduced the official growth outlook for next year, it said.

Get Rediff News delivered into your Inbox.
Lalit K Jha in Washington
Source: PTI© Copyright 2020 PTI. All rights reserved. Republication or redistribution of PTI content, including by framing or similar means, is expressly prohibited without the prior written consent.
Related News: Bureau of Economic and Business Affairs of the State Department, US State Department, India, Narendra Modi, Bharatiya Janata
SHARE THIS STORY
Print this article