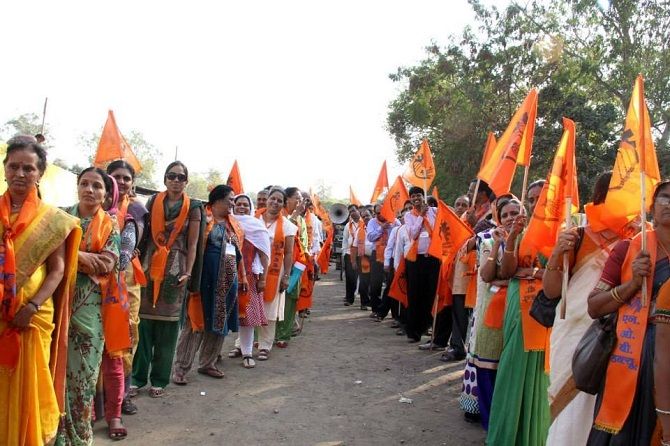 The Rashtriya Swayamsevak Sangh-affiliated Bharatiya Mazdoor Sangh and a breakaway faction of the Congress-affiliated Indian National Trade Union Congress are joining hands to form a 'non-political' front to press for a common set of demands to the government.

This marks a new chapter in the trade union movement in India after all 11 central trade unions came together on a platform in 2009 to formulate a common set of demands.

The front, known as the Confederation of Central Trade Unions (CONCENT), has one more union, the National Front of Indian Trade Unions (NFITU), and an expelled leader from the Trade Unions Co-Ordination Centre (TUCC).

The NFITU says it is not affiliated to any political party.

"Trade unions affiliated to political parties are serving their masters and they are not doing justice to workers who have become secondary to them. They are cheating and abusing workers and farmers for political gains," said BMS General Secretary Virjesh Upadhyay.

The core thrust of CONCENT will be to keep it a non-political instrument and allow 'like-minded' regional, state and sectoral organisations to give solutions on issues related to workers, said Dipak Jaiswal, national president, NFITU, and convener, CONCENT.

The front will operate from the BMS office in New Delhi and will be headed by BMS National President C K Saji Narayanan.

The front will hold its convention of workers on December 31 to adopt its charter of demands, which will be submitted to a group of ministers led by Finance Minister Arun Jaitley.

Cracks in the trade union movement were visible soon after the National Democratic Alliance government assumed power in May 2014.

The BMS broke ranks with all other unions in August 2015, when it decided not to participate in a one-day nationwide strike of workers in September 2015, following assurances from the government that it would meet its demands.

The NFITU decided to stay away from the strike. Further, the BMS and NFITU didn't support other trade unions in a similar nationwide strike in September 2016.

Relations soured further and all other trade unions stopped inviting the BMS to their conventions, meetings and conferences, leading to a communication breakdown.

Before the September 2016 strike, a group of ministers led by Jaitley invited only the BMS for discussion.

"The Union government is trying to create a division among workers by using the BMS. S P Tiwari, who we had expelled from the TUCC in 2015, is part of this new group known as CONCENT. The government wants to disrupt the two-day nationwide strike called by the 10 unions in January," TUCC Secretary G Devarajan said.

K K Tiwari, who belongs to the rebel faction of the INTUC, is a part of CONCENT.

The government had last year barred the INTUC from attending all consultation meetings after three leaders within the organisation claimed to be leading the union. The matter is pending in the Delhi high court.

"All labour issues should be above politics. Any move from the government which is positive and forthcoming should be looked from the workers' point of view. If the government is doing good things, we will openly support it. The government has become favourable to workers' demands," BMS chief C K Saji Narayanan said.

In a statement, CITU said the BMS 'deserted and got isolated' from the joint trade union movement after the NDA government came to power in 2014.

'It (the BMS) had no problem in joining the joint trade union movement and participating in struggles on common demands as long as the Congress-led UPA government was in power. But its discomfiture started when the BJP-led government came to power in 2014,' CITU said. 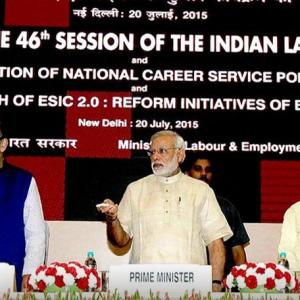 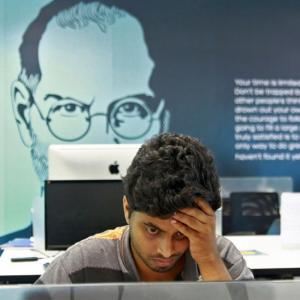