News
Business
Movies
Sports
Cricket
Get Ahead
Money Tips
Shopping
Sign in  |  Create a Rediffmail account
Rediff.com  » Business » Investors, be warned: Bear phase not over yet

Experts find it difficult to predict a bottom for the bourses.
Jash Kriplani reports.

With the benchmark indices Nifty and Sensex falling for the third day in a row, baffled analysts are increasingly finding it difficult to predict a bottom for the markets.

Technical analysts expressed concern that if there is no meaningful recovery in the next two-three sessions, the Nifty could touch 10,200-levels.

"The kind of volatility we are seeing at present is typical of a bear market. The India volatility index (Vix) has gone all the way to 20. This is seen during bear markets," said Sneha Seth, derivatives research analyst at Angel Broking.

"The Vix typically moves between 15-16 on the lower side and 22-23 on the higher side during such market conditions," Seth added.

In the last three sessions, the Nifty has lost as much as 691 points. The index is down 13 per cent from the peak it touched on August 28.

Seth added that there is fresh build-up of short positions which is driving the present correction.

"Whatever correction we saw in the last F&O series was largely due to unwinding of long positions or profit booking. But the current sell-off is driven by fresh short positions, which is a cause for concern," she said.

Technical analysts said that in such a market, it is difficult to guess support levels.

"The Nifty has breached the 200-day moving average (DMA) mark as if it never existed. The gap-down opening on Thursday itself was below 200-DMA. In such phases, even important support levels are not respected by the markets," said Hadrien Mendonca, senior technical analyst at IIFL Securities.

Even the current chart formation indicates another phase of correction, Mendonca added.

"The last three-day fall has created a three black-crow pattern on the candle-stick charts, which is considered a launch pad for another phase of decline. The strategy in this market will be to sell on a rally. On the downside, another 150-point decline cannot be ruled out," Mendonca pointed out.

Experts said the major causes of concern -- the rise in crude and dollar -- are unlikely to abate anytime soon.

"On technical charts, we see crude rising to $90 to $91 a barrel. The rupee could see some cooling off after spiking to 75 against the dollar," Mendonca said.

All these factors could end up putting Nifty firmly into a bear territory in the coming sessions.

"The Nifty breached its crucial weekly moving averages on its way down. In the last session, the index broke the lower end of the reverse channel as well. This near vertical fall has pushed the weekly momentum indicator into negative territory," said Gaurav Ratnaparkhi, senior technical analyst at Sharekhan by BNP Paribas.

"The short-term momentum indicators have been pushed into the mega-oversold zone, which allows the index to slide without looking for a bounce," Ratnaparkhi added.

"In terms of the wave structure, the Nifty is forming a wave extension on the downside, opening up lower levels for itself." 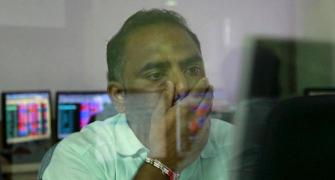