A combination of positive macroeconomic factors -- such as falling crude oil prices and relative insulation from the trade war -- has resulted in a widening gap, according to experts.

This may also mean sharp jumps in volatility could come into play for markets that may not have discounted events like the local elections and the manner of Brexit, all of which are expected to take centre stage in the first half of 2019.

The CBOE Dow Jones Industrial Average Volatility Index, called the 'fear gauge' for US stock markets, has seen a sharp spike of late.

A similar trend is seen in another index.

The Global Economic Policy Uncertainty (GEPU) Index has more than doubled in 2018.

At the same time, the India News-Based Policy Uncertainty Index has actually declined, having lost around a fifth of its value since December-end 2017.

The gap has only widened in recent months.

Reserve Bank of India Governor Urjit R Patel also resigned before his term ended, amid talk of a rift with the government.

Uncertainty over economic policy has remained benign during December, despite both these events.

The index actually fell during the month, with the December reading at 67, down from 68.8 in November.

The indices to measure uncertainty were created as part of the academic work done by authors Scott Baker, Nicholas Bloom and Steven J Davis, in their paper Measuring Economic Policy Uncertainty.

Davis has built further on the index and publishes a monthly index of the GEPU.

Deepak Jasani, head (retail research) at HDFC Securities, said that global volatility had spiked towards the end of 2018 on account of concerns over trade wars and the slowdown in China.

India is less affected by these issues because of its dependence on domestic consumption, rather than exports.

That said, the overall volatility range has also been reducing, according to him.

"The range for the volatility index in India has been shrinking in recent years, though one did see a spike ahead of the 2014 general elections. We may see a similar rise in volatility once election dates are announced for 2019," says Jasani. 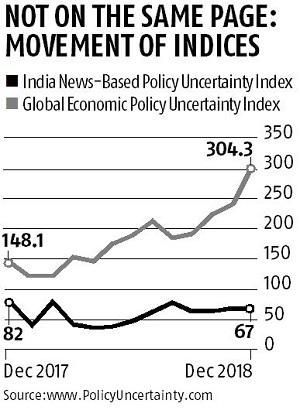 Market experts do factor in surprises on the elections front, saying that the outcome may not be like 2014 when the BJP won enough seats to get a majority on its own -- the first time a party had done so in 30 years.

A coalition is more likely at the Centre, according to Ramesh Damani, member of the BSE.

"I don't expect any party to get a majority," he said.

While earnings growth is expected to be a positive, India's premium is at risk of shrinking if a weaker government comes to power, according to a Credit Suisse Wealth Management (India) outlook and strategy report.

'India's premium to other EMs (emerging markets) is at 66% compared to the historical average of 37%. Moreover, a potentially weaker mandate for the new government in 2019 could also lead to some P/E de-rating as the political premium that India now commands diminishes, in our view,' said the January 7, 2019 report, authored by Jitendra Gohil, head of India equity research, and Premal Kamdar, equity research analyst.

However, a rise in volatility should not be seen as a long-term negative, added Damani.

The economy is likely to grow at the current rate over the longer term, irrespective of which government comes to power.

"People always short-change the resilience of the economy," Damani said. 'Markets are not going to be calm about elections'