Experts believe GDP growth in the second half could be lower than that in the first half of this fiscal by a mile, reports Sheetal Agarwal in Mumbai. 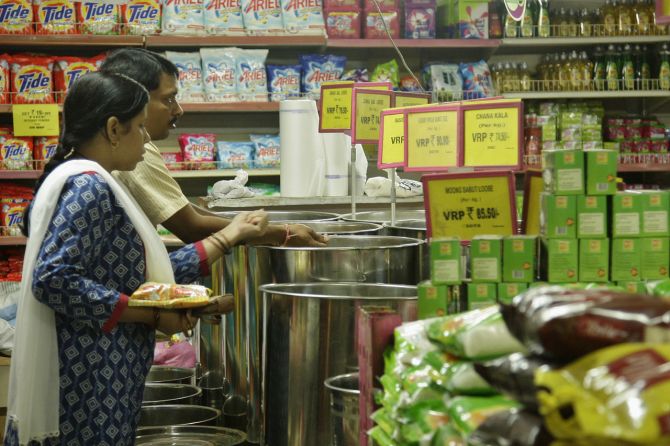 The government's move withdrawing Rs 500 and Rs 1,000 currency notes, popularly referred to as demonetisation, has dashed expectations of a pick-up in consumption in the second half of the current financial year.

Led by multiple reasons like a normal monsoon after two weak years, higher pay for government employees, increased infrastructure spending and so on, economists and market participants were hoping for a pick up in India's gross domestic product (GDP) and corporate earnings.

On the contrary, experts now believe GDP growth in the second half could be lower than that in the first half of this fiscal by a mile, and have lowered their estimates for FY17.

According to May 31, 2016, a release of the Central Statistics Office (CSO), a government entity, the real GDP (at constant prices) was estimated at Rs 113.50 lakh crore.

This broadly suggests that the impact of a 10 basis point (bps) reduction in GDP growth rate would be equivalent to Rs 11,350 crore.

"We estimate that over a year, economic growth can fall by 70-] to 100 basis points, with the maximum impact in the immediate two quarters, which will see a large contraction in effective money supply," says Pranjul Bhandari, Chief India Economist, HSBC Securities and Capital Markets.

There are others who see a sharper contraction in economic growth. Ambit Capital, for instance, expects GDP to just about inch up 0.5 per cent in the second half of this financial year, compared with the year-ago period.

Ambit's analysts led by Ritika Mankar Mukherjee, say, "The demonetisation-driven cash crunch that is playing out in India will paralyse economic activity in the short term. Hence, we expect GDP growth to decelerate from 6.4 per cent in 1HFY17 (as per Ambit's estimate) to 0.5 per cent year-on-year in 2HFY17 with a distinct possibility of GDP growth contracting in 3QFY17."

In effect, Ambit has nearly halved its FY17 GDP growth forecast to 3.5 per cent.

Among the conservative estimates, CARE Ratings believes that overall GDP growth would be affected by 0.3 to 0.5 per cent.

Weakening consumption demand due to the cash crunch, muted investment growth along with loss of productivity (as people line up for hours to deposit/exchange cash) are few factors that will pull down near-term GDP growth.

Interestingly, only some part of this loss can be restored in the last quarter of this fiscal.

Most experts believe consumption demand, particularly of necessities, could bounce back earlier than that of consumer durables.

Another key indicator will be how much currency would actually come back in the system as experts believe there could be some wealth destruction.

Sajjid Z Chinoy, Chief India Economist, JPMorgan, says, "Before demonetisation, 10 per cent of GDP came from high value notes. If even 20 per cent of these do not get returned, the first-round negative wealth shock would be 2 per cent of GDP."

Any such negative wealth shock, however, is expected to depress consumption behaviour, prices of certain asset classes (real estate), and therefore have secondary wealth effects, he adds.

Cash-heavy sectors such as real estate, jewellery, amongst others could be worst hit from demonetisation and may take a longer time to revive.

"The ripple effect will be significant as these are labour-intensive sectors and comprise up to 35 per cent of GDP," believe analysts at Kotak Institutional Equities.

Small and medium enterprises, too, will be hit from demonetisation while agriculture is expected to be least impacted.

Though demonetisation will benefit the economy via increased number of tax payers, lower rates which in turn can aid demand and growth, higher financial savings, amongst others; these will accrue on a gradual basis.

Expert view on the impact of demonetisation on FY18 GDP growth, however, is mixed.

"There should be a modest recovery in FY18, when GDP growth may inch up to 7.4 per cent on the back of some policy stimulus," says Samiran Chakraborty, Chief economist, Citi India.

Ambit Capital, however, has meaningfully (150 basis points) lowered the estimate for FY18 as well.

'From 3QFY17 until 4QFY19, we expect a strong "formalisation effect" to play out as nearly half of the non-tax paying businesses in the informal sector (40 per cent share in GDP) become unviable and cede market share to their organised sector counterparts,' says Ambit.

'We expect this dynamic to crimp GDP growth in FY18 as well and hence we cut our FY18 GDP growth estimate to 5.8 per cent (from 7.3 per cent),' Ambit adds.

The jury is out on the extent of impact demonetisation will have on India's GDP growth. A lot will also depend on the government and the RBI's reform and policy action to cushion the impact. 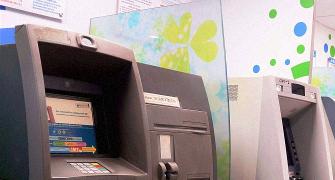 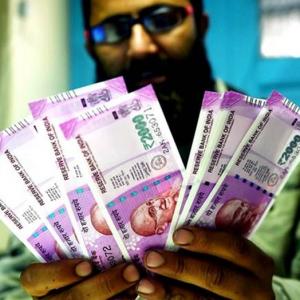