India's GDP is estimated to contract by a record 7.7 per cent during 2020-21 as the COVID-19 pandemic severely hit the key manufacturing and services segments, as per government projections released on Thursday. Amid overall decline in economic activities, some respite was provided by the agriculture sector and utility services like power and gas supply, which have been projected to post positive growth during the current fiscal ending March 2021.

"The growth in real GDP during 2020-21 is estimated at -7.7 per cent as compared to the growth rate of 4.2 per cent in 2019-20," said the first advanced estimates of national income released by the National Statistical Office (NSO).

The contraction in the Gross Domestic Product (GDP), however, would not be as steep as projected by certain international agencies like the IMF and World Bank.

Commenting on the data, the finance ministry said the GDP estimates suggest a continued resurgence in economic activity in the second half of the current fiscal and point at post-lockdown sustained V-shaped recovery.

"The AE of 2020-21 reflect continued resurgence in economic activity in Q3 and Q4 - which would enable the Indian economy to end the year with a contraction of 7.7 per cent," it said in a statement.

State Bank of India's research report Ecowrap said, "It's now official. Due to the COVID pandemic India will witness negative GDP growth rate for the first time after 1979-80."

"If we juxtapose the data which is available for H1 and look at the FY21 estimates, CSO is expecting some recovery in services sector, with financial, insurance, real estate services leading," it said. 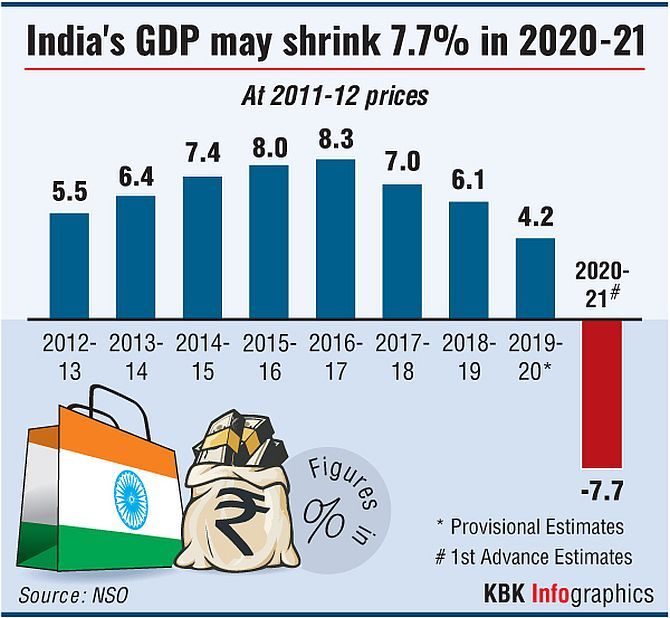 GVA does not factor in net taxes.

GVA in the key manufacturing sector is likely to see a contraction of 9.4 per cent during 2020-21 as compared to a flat growth of 0.03 per cent in the year ago period.

'Mining and quarrying', and 'trade, hotels, transport, communication and services related to broadcasting' GVAs are likely to contract by 12.4 per cent and 21.4 per cent, respectively.

The construction sector too is projected to contract by 12.6 per cent, 'public administration, defence and other services' by 3.7 per cent, and 'financial, real estate, and professional services' by 0.8 per cent, as per the data.

On the other hand, 'agriculture, forestry and fishing' sector has been projected to grow at 3.4 per cent during the fiscal.

Similarly, 'electricity, gas, water supply and other utility services' is likely to post a growth of 2.7 per cent during the year ending March 2021.

The government has been stressing that economic activities are picking up post gradual unlocking of the economy and stimulus packages, and the country would witness a V-shaped growth.

The country's monetary authority, the RBI, had said the second half of the fiscal is expected to show some positive growth.

RBI has forecasted real GDP growth at (-) 7.5 per cent in 2020-21, which is an improvement over its previous projection of 9.5 per cent contraction.

The World Bank in its latest Global Economic Prospects estimated India's economy to contract by 9.6 per cent in the fiscal year 2020-21, reflecting a sharp drop in household spending and private investment.

According to the International Monetary Fund (IMF), India's economy is projected to contract by 10.3 per cent this year and likely to bounce back with an impressive expansion of 8.8 per cent next year.

Moody's Investors Service had recently upped the growth forecast to (-) 10.6 per cent, from its earlier estimate of (-) 11.5 per cent, saying the latest stimulus prioritises manufacturing and job creation and shifts focus to longer-term growth.

NSO said in wake of the pandemic, the data challenges in the case of other underlying macroeconomic indicators like the IIP and CPI used in the estimation of National Accounts aggregates, will also have implications on these estimates.

Further, the projected indices may significantly vary from the actual indices which in turn will depend on the pandemic-led economic situation prevalent during those months and specific measures, if any, taken by the government, it said.

"Estimates are therefore likely to undergo sharp revisions for the aforesaid causes in due course, as per the release calendar," it added. 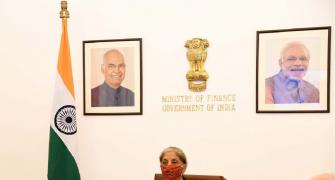