The Consumer Electronics Show is one place were science fiction meets reality, and this year's edition was no different.

True to form, CES 2019 in Las Vegas, Nevada, the US, saw mind-blowing concept vehicles being introduced, from self-driven cars to flying cars controlled by AI.

Ashish Narsale/Rediff.com offers a quick checklist of the best of CES's Auto World. IMAGE: The interiors of Byton's M-Byte electric vehicle, featuring a massive screen, which was unveiled at the 2019 CES in Las Vegas on January 6, 2019. Photograph: Alexandria Sage/Reuters

The M-Byte has a 48-inch curved display console for driver information and infotainment.

The steering wheel has a touch screen control panel.

Byton claims its car to be "future-proof" as it's built on a unique plug and play architecture, by which both the software and hardware are upgradable.

M-Byte can be charged up to 80 per cent in just 30 minutes flat. IMAGE: Gill Pratt, CEO of the Toyota Research Institute, poses by a research vehicle equipped with Toyota Guardian, an accident avoidance system that assists drivers, during a news conference at the 2019 CES in Las Vegas, on January 7, 2019. Photograph: Steve Marcus/Reuters

Toyota is pushing road safety to the next level by introducing the Toyota Guardian technology, an accident avoidance system developed by the auto major.

If the system senses a collision or the car moving out of its safety zone, it takes over from the driver and manoeuvres the car to safety or avoids a collision. 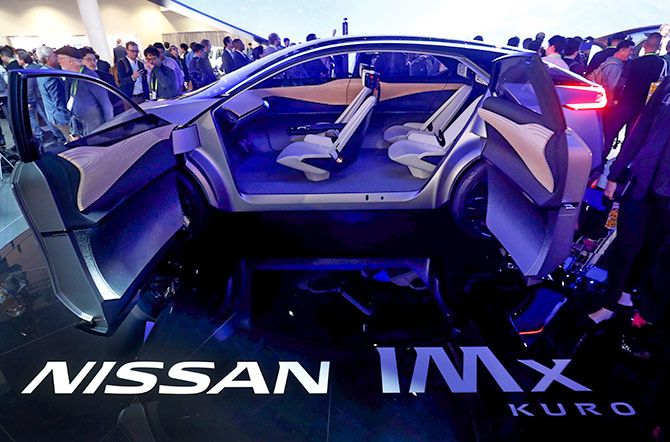 The IMx KURO is powered by Nissan's Brain-to-Vehicle (B2V) technology.

If you remember how in the James Cameron movie Avatar the human-like creatures and animals connect, in a takeoff from it the B2V technology reads the brain waves of the driver to predict his/her action or detect the driver's discomfort, and interprets and transmits the signals to the autonomous system to improve the drive quality. IMAGE: A display promotes the Kia R.E.A.D. (Real-time Emotion Adaptive Driving), a system that reads the emotions of the passengers, at the 2019 CES in Las Vegas, on January 8, 2019. Photograph: Steve Marcus/Reuters

Through this system the vehicle is able to read the passengers' emotions through their expressions. IMAGE: The Honda Dream Drive, a voice-activated, in-car system that provides for a variety of services through smartphone apps, is displayed at the 2019 CES in Las Vegas. Photograph: Steve Marcus/Reuters

In case you are wondering how the driver can watch movies or read books, the system is divided into two parts, and the one for the driver filters the content to offer options like filling fuel, ordering food or booking tickets. The passengers get the full bouquet. IMAGE: A BMW with Mobileye technology is displayed at the 2019 CES in Las Vegas. Photograph: Steve Marcus/Reuters

Mobileye is a advanced driver assistant system (ADAS), which is different from other such systems that use multiple cameras, laser or radar.

Mobileye uses a single optical camera, software algorithm and AI to detect other vehicles and obstacles. Not just any other electric cruiser, this bike is enhanced with Panasonic's cellular telematics connectivity.

When the app is installed on one's cell phone and synced with the bike, one can check the bike's vitals like battery charge status, find its location on a map and get security alerts if the bike is bumped, tampered with or moved. 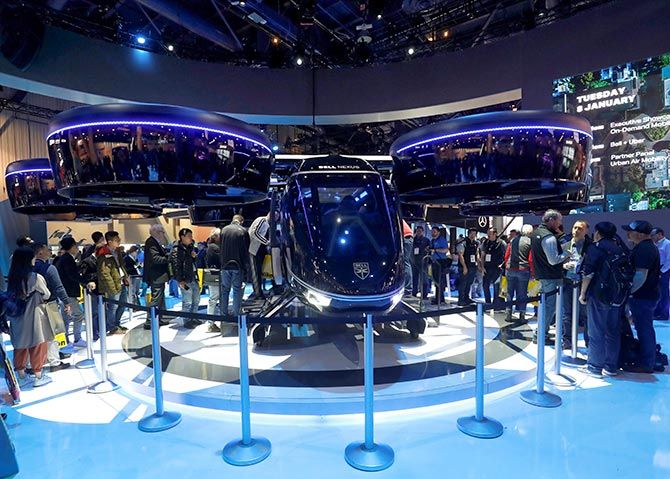 IMAGE: The Bell Nexus, a vertical take-off and landing (VTOL) aircraft, is displayed at the 2019 CES in Las Vegas. Photograph: Steve Marcus/Reuters

The transportation for the future is here, courtesy the Bell Nexus, aka flying taxi.

Bell Nexus is a vertical take-off and landing (VTOL) aircraft, which means lesser space is required to take off and land. Expect to be ferried in one soon enough! Unable to walk or having no one to attend to you? No worries, the Japanese self-drive wheelchair comes to your rescue.

The Whill Autonomous Drive wheelchair uses Lidar (that measures distance by pointing a laser at the target and calculating the reflected light on a sensor) to create a map and also to avoid obstacles.

The wheelchair can be controlled via an app, all one has to do is to set the destination and you will be transported.

When not in use the wheelchair automatically goes back to its predestined position.

Oh yes, the wheelchairs can even communicate with each other to ride in tandem. 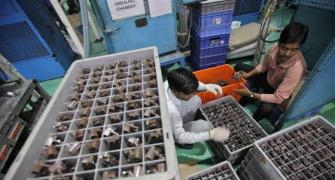 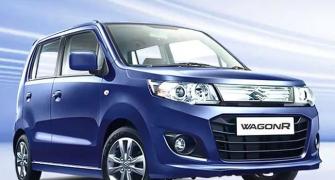 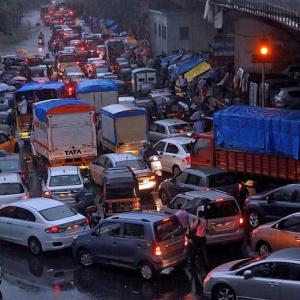