Typically, about four to six weeks ahead of the polls, activity in the property market picks up as politicians begin to pull out their money parked in real estate. But this time, it’s all quiet till now in real estate so far.

Real estate and Indian elections have gone hand in hand for years. But the 2019 Lok Sabha election, tipped to be among the most expensive in the world with political parties estimated to spend around Rs 50,000 crore, is set to be different.

Typically, about four to six weeks ahead of the polls, activity in the property market picks up as politicians begin to pull out their money parked in real estate. This time, it’s all quiet till now in real estate.

That does not, however, mean that the upcoming elections will have no bearing on the country’s economy. Milan Vaishnav, director and senior fellow, South Asia Program Carnegie Endowment for International Peace, says, “I expect the elections will act as an economic stimulant as parties and candidates open up their pocketbooks and unleash large campaign budgets on advertising, consumer goods, and large rallies and processions.’’

Vaishnav, an India watcher, expects to see a short-duration, consumption-led spike between March and May 2019, though real estate may in fact take a dip. He explains why.

“In our research, Devesh Kapur and I have found that cement consumption -- a barometer of construction activity -- actually sharply declines  during the month of the elections as excess liquidity in the sector is actually channelled into political campaigns. The effect is short-lived but makes sense given that real estate/construction is believed to be a prime source of funds for politics.’’

A recent report by Anarock Property Consultants cites the stress in realty to suggest the absence of activity in the sector ahead of elections.

“It is no secret that in the past, funds parked by political parties in real estate were sucked out of the system to finance their poll campaigns, and the market is currently facing a serious liquidity crunch,’’ according to the report.

Anuj Puri, chairman, Anarock Property Consultants, points out that in the previous years, when funds parked by political parties in real estate were sucked out of the system to finance poll campaigns, there was no major liquidity crisis in the sector.

“If funds are pulled out from real estate in 2019 when liquidity crisis is a major concern, it could prove to be more stressful for the overall market,’’ Puri argues, adding that homebuyers could perhaps go for some hard bargaining with cash-strapped developers stuck with large unsold stock.

Coming to overall consumption, Sunil Duggal, CEO, Dabur, says election does fuel demand. “Consumption does tend to go up with increased liquidity during elections…. But the effect this time around could come with a lag because the welfare measures in some cases (such as the PM-Kisan scheme) were launched only last month.’’

But such schemes could help as well, as Sumit Malhotra, MD, Bajaj Corp, explains. “Some part of the money that farmers are getting through welfare measures will go into buying discretionary products (such as durables and motorcycles), purchases that otherwise don't happen easily.”

In automobiles, another sector which experiences election impact, the verdict is mixed. In a recent interaction, Maruti Suzuki India chairman R C Bhargava said there were historical instances of sales being lower in a pre-election year and picking up substantially again in the election year.

But, Mahantesh Sabarad, head of retail research at SBICAP Securities believes the co-relation between elections and auto sales have weakened over the years.

“Elections in the past were a harbinger of good sales for UVs (utility vehicles) as they were a campaign must-have for any serious candidate. However, the trends have shifted with considerable budget allocated to social media for campaigns," says Sabarad.

But, analysts are watching the space closely. Subrata Ray, senior group vice president at the research arm of Icra Ratings, says that smaller commercial vehicles may get a marginal boost as they may be purchased to transport people while the personal segment will remain the least affected.

However, buyers in smaller towns and cities may defer purchase till elections as vehicles are sometimes taken forcibly and used for campaigns.

On the consumption side, Eric Braganza, president, Haier Appliances India, says the picture should get clear in a month from now. In the north, for instance, the weather has been a bit of a deterrent. ‘’In April, things will get clearer. As summer kicks in, the money in the hands of people could find an outlet,’’ Braganza points out.

In the meantime, hotel aggregator OYO is optimistic. “We have seen a significant upswing in both searches and bookings around the time large electoral rallies are scheduled in certain parts of the country,’’ an OYO spokesperson said. But the sense this time is that cash transactions are under watch, a post-demonetisation phenomenon perhaps, in the run up to the polls. Also, the Election Commission curb on party expenditure and stress in businesses such as real estate and banking are keeping the poll economy slow. 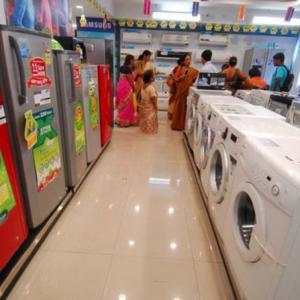