One of the smallest players in India's car market, it is banking on new-look Etios to make inroads into the personal vehicle segment 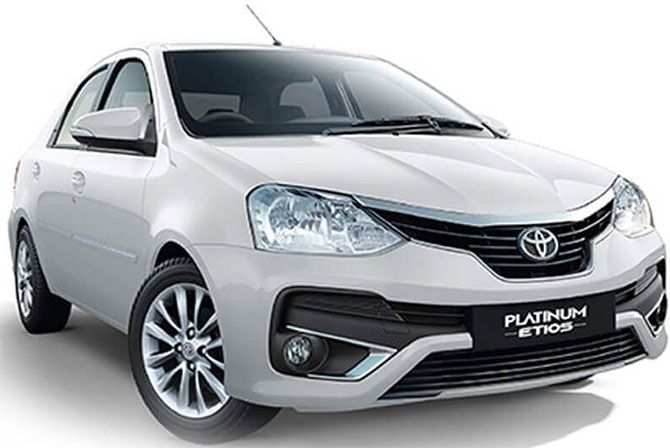 The association of a car with taxis can cause irreparable damage to its prospects and can also hurt the fortunes of the manufacturer. We have some interesting examples here: Tata Motors’s Indica and Indigo, Honda’s Amaze and Hyundai’s Xcent.

These vehicles, over the years, have acquired the perception of a taxi car, reducing the interest of buyers in the personal use segment. Now, Japanese auto major Toyota is faced with a similar challenge: its first compact sedan in the country, the Etios, is being increasingly identified as a taxi car. The Innova has predominantly been a taxi.

A decade ago, when the Etios was at the project stage, the world’s largest car maker had flown engineers from Japan to gather insights on the Indian market and incorporate them in a car suitable for Indians.

The vehicle was indeed suitable to India and within a couple of years of its launch in December 2010, the Etios became a favourite with the taxi and fleet operators.

A conscious attempt is now being made at Toyota to revisit the positioning of the Etios. Last month, it gave a facelift to the car.

However, the acceptance in personal segment where buyers wanted better visual appeal and enhanced interiors was relatively less. “Our engineering team worked to make the Etios more attractive for the personal segment. Changes have been incorporated based on customer feedback.”

The vehicle, now known as the Platinum Etios, has got a new design, better safety features and stylish looks. Toyota has also priced the new vehicle strategically. In fact, price of base variant has been kept at pre-facelift levels.

“The new Etios is more premium and thus we have named it as Platinum Etios to add to its appeal and highlight the value that the product offering has,” claims Raja.

The initial response has been good. The company claims to have seen a significant jump in enquiries after the launch of the Platinum Etios: Enquiry per day has more than doubled compared to the previous three-month average.

It is easy to see why the Etios is so important for Toyota. Toyota has remained one of the smaller players in the Indian passenger vehicle industry as far as market share is concerned. This is primarily because it has not been able to establish itself in the small and entry segment that makes for the bulk of sales. The world’s largest car maker ranked sixth in India  in FY16 (when it sold 128,494 vehicles) and had a market share of less than 5 per cent.

While Innova has been the company’s most sold vehicle accounting for 43 per cent of volumes, its sales declined 12 per cent last year owing to the ban on diesel vehicles in the National Capital Region. Etios was the only model in Toyota’s basket that registered a growth.

As a petrol variant of the Innova launched three months ago is yet to make its mark and as diesel vehicles continue to remain under pressure, Etios is the only car that holds promise for the company.

Toyota’s customer order trend shows a positive growth in the personal segment of more than 200 per cent, including both petrol and diesel, in September compared to the June-August period.

While increasing focus on the personal segment, Toyota is careful not to ignore the sizeable business that comes from the taxi or fleet segment. “Both our personal as well as fleet customers are important to us and we ensure that our product range has something to cater to both,” says Raja.

Fleet demand has been steady and is being catered through the base variant with enhanced features and added specs, the company says.

Commercial vs personal use

The fleet segment has become a critical base for most car makers. A week ago, Toyota entered into a partnership with leading cab aggregator Uber to provide on-road financing to drivers for vehicles such as the Etios.

There are success stories of a balance between the fleet and personal segment. Take the case of Maruti Suzuki’s compact sedan, the Swift Dzire. While a significant chunk of the Dzire sales come from fleet, the personal segment dominates.

In fact, the country’s largest car maker rolled out a distinct model of the Dzire (Dzire Tour) to specifically cater to the fleet segment.

Another vehicle that has piqued the interest of personal segment buyers was the Innova Crysta. Strangely enough, the Innova had always been seen primarily as a taxi, but Crysta, which was launched in May, changed it. Almost 96 per cent of Crysta buyers use it for personal commute.

“The majority of those who have appreciated the Crysta are our existing Innova customers who have come back to us to purchase the new Crysta,” says Raja. The fleet segment demand is being met from the previous variant of the Innova.

Abdul Majeed, partner at Price Waterhouse, says two things that fleet segment operators look for in a vehicle are the cost of ownership and fuel efficiency. “The personal segment buyer looks at these two factors but also gives priority to looks, style and features of a car. All these are important for  individuals and families,” he says.

Interestingly, the contribution of fleet segment has been falling for Toyota of late. Innova and Etios put together used to see 30-40 per cent of volumes come from this segment before the new vehicles were launched. The fleet now contributes to 17-23 per cent.

As part of its repositioning efforts, the company has rolled out a new TV commercial on the Etios. It tries to portray the new car as a family car by highlighting features like rear centre seat belt and child seat lock.

The message being sent across is that Platinum Etios is safer, more comfortable and roomier. The company has also carrying out marketing campaigns on radio and the social media. “We believe we are hitting the right notes in marketing,” says Raja.