News
Business
Movies
Sports
Cricket
Get Ahead
Money Tips
Shopping
Sign in  |  Create a Rediffmail account
Rediff.com  » Business » The Ford Mustang has a lot going for it

It is a multi-faceted car which can be enjoyed on the racetrack, for daily use and even on the long highway trips. 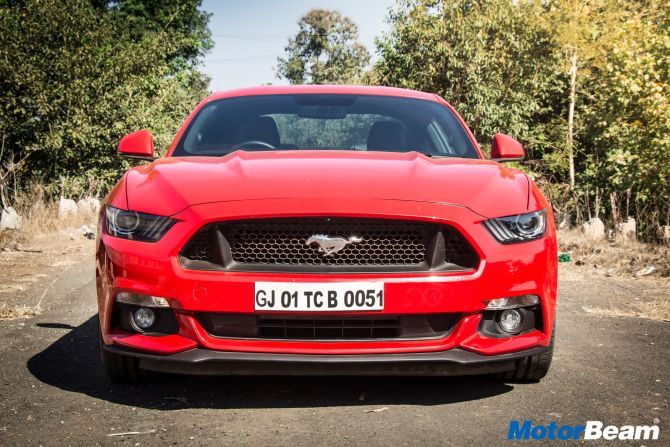 The first generation Ford Mustang was launched way back in 1964 and ever since it has been a favourite among car enthusiasts all over the world.

The Pony car was launched in India in 2016 and Ford claims that the Mustang is a grand tourer rather than an outright sportscar. So, how good a grand tourer is it? We find out.

Starting off with the most pleasing aspect about the Mustang, the design and looks. The car turns heads in a jiffy and is sure to get people's hearts racing.

In fact, the real craze for the Mustang among the enthusiasts is because of the way it looks. 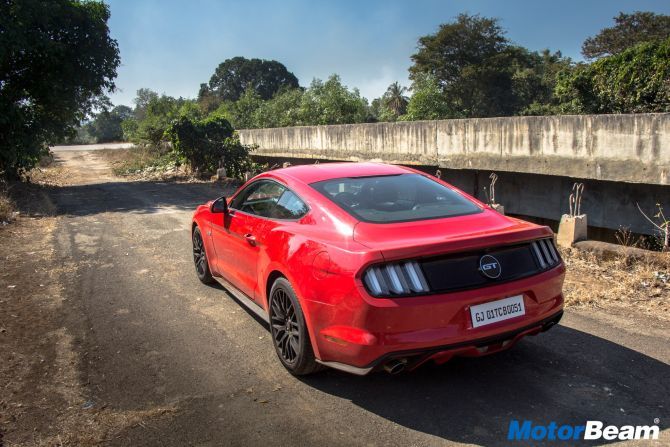 While the swooping long bonnet, the iconic Pony badged grille, aggressive-looking projector headlights with the LED DRLs and the coupe-like roof design makes the Mustang stand out as a proper muscle car, the black-finished alloy wheels and the three slat LED tail-lights give it a racy appearance.

Sneak inside the cabin and you are greeted by a retro-inspired yet modern-looking cabin. Some interesting bits about the Mustang's cabin are the 'Since 1964' embossing/badging on the left side of the dashboard and the big turbine style dials for the instrument cluster which reads out 'ground speed'.

That aside, there is a 3-spoke multi-function steering wheel (with cool aluminium inserts) and a touchscreen infotainment system with Apple CarPlay and Android Auto. 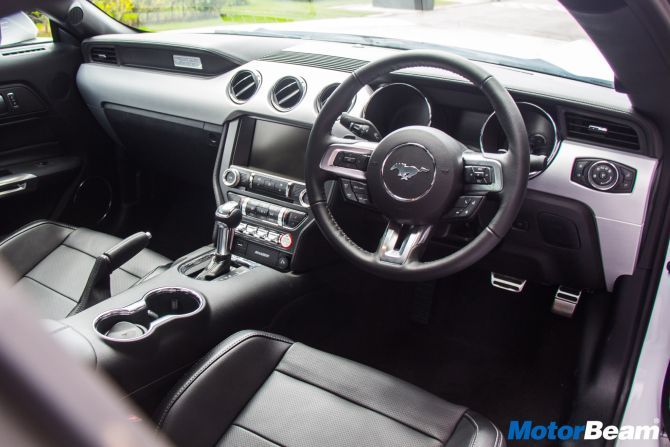 The centre console houses a slew of buttons including toggle switches.

The front seats are super large and literally hug you. They are comfortable and offer good support while the rear seat is not suited for adults as legroom and headroom are tight. The boot has a luggage capacity of 383-litres. 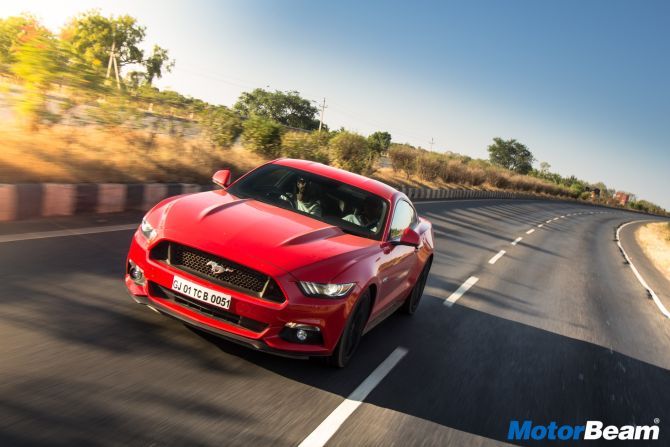 Coming to the most interesting part of the Ford Mustang, the performance. Powering the Mustang is a 5.0-litre V8 naturally aspirated motor that produces 401 PS of power and 515 Nm of torque. 0-100 km/hr comes up in just 4.5 seconds.

The engine is very tractable and feels super thrilling on the straights.

The mid-range is punchy while the powertrain goes nuts as you reach the redline.

You'd want to turn off the music in the car and enjoy listening to the exhaust note instead. 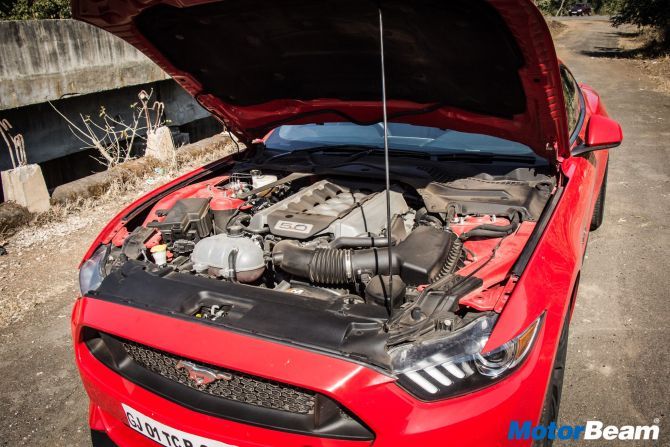 There is absolutely no flat spot in the entire rev range and the car gives you a good dose of adrenaline when you go hard on the throttle.

The powerplant comes mated to a 6-speed automatic transmission with paddle shifts.

On part throttle, the gearbox feels quick but floor the gas and the gearbox takes a while to shift cogs.

However, there is a manual mode as well in which the gearbox doesn't upshift on its own and this quite contributes to the fun factor. Now we know someone buying a Mustang is least bothered about its mileage but for others wanting to know, the Pony car delivers a fuel efficiency of around 5-6 km/l. 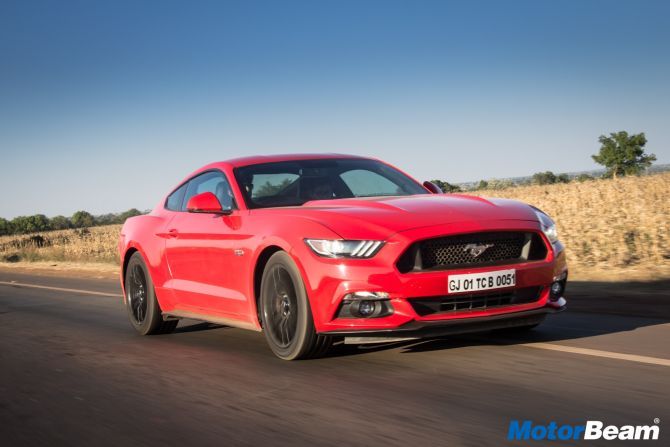 In terms of driving dynamics, the Ford Mustang is pretty much sorted. Though the suspension is on the stiffer side, it isn't back breaking actually.

It handles well on both the smooth and the rough roads but the big potholes do filter inside the cabin. The ride is flat and the high-speed stability is commendable.

During our drive, we never managed to scrape the underbelly and that itself tells how good a sportscar the Mustang is for the Indian roads. The steering offers good feel and feedback but could have been slightly better. Braking performance is great and the car sheds speeds in no time.

The driving experience of the Mustang is very engaging and this is a mad car and it also loves going sideways at the drop of a hat.

In terms of safety features, the Mustang has you covered. There are multiple airbags, Traction Control, ESP and Hill Launch Assist. 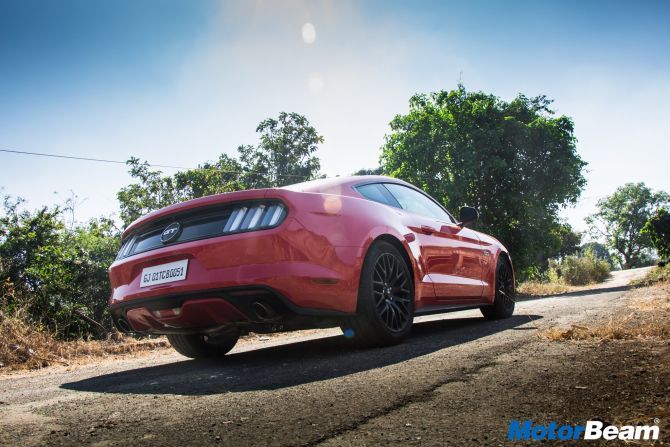 The Mustang has exclusive service centres where the car is available, however, costs of spares would be on the costlier side as the vehicle is a CBU model and components have to be imported.

The Ford Mustang has a lot going for it. It is a multi-faceted car which can be enjoyed on the racetrack, for daily use and even on the long highway trips.

At Rs 74.62 lakh (ex-showroom, Delhi), the vehicle sure isn't cheap but what you get for that price is an instant attention magnet sportscar that looks good, is loaded with features and drives good. 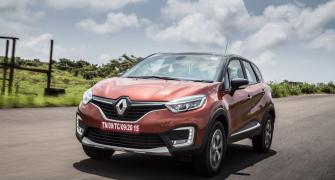 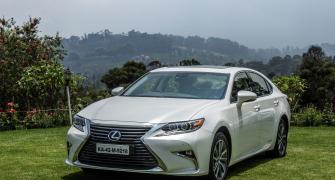