Rajesh Karkera test-drives the Renault Triber AMT, a 7-seater for the easy rider in you.

The Renault Triber AMT, an inconspicuous car which didn't create a buzz when it was first launched in September 2019, still managed to sell 20,000 units before the year was over.

The first launch was the crossover's manual version.

And now Renault has launched the AMT version of its versatile 7-seater family car, which is exactly the same as the manual version but for the AMT gearbox. I say a family car for the sole reason that this vehicle successfully does what it's supposed to. Take you places, in comfort.

A sub-4 metre MPV for people of all ages to travel in.

A well-priced car which, when you compare its features with the price, does not seem like a bad deal at all.

Positioned below the Maruti Ertiga, this is one hassle-free car for the tame, non-speeding type of individual.

We test drove the car extensively in Mumbai's traffic conditions and here's what we think. 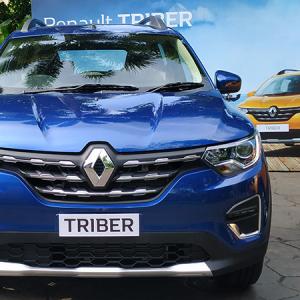