We drove in Italy what will be Mercedes-Benz’s most affordable drophead offering in India - the new C-Class Cabriolet! 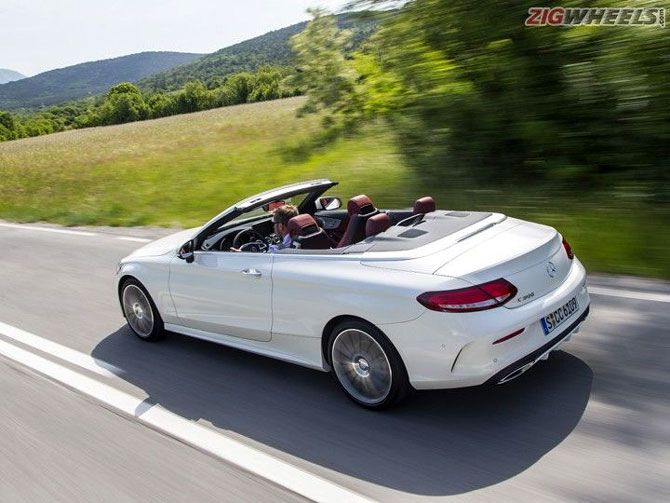 We were in a small but scenic city of Trieste in the northeastern part of Italy. It is situated on the coast of the unbelievably blue Adriatic Sea and is not so far away from the border of Slovenia. We were so excited to drive a fast Mercedes-Benz convertible but the sky outside the window of our luxurious Falisia Resort room looked grey and gloomy. And voilà it poured!

We only had a day with the C-Class Cabriolet so it really didn’t matter whether it rains or the sun is shining bright! Our route involved the less explored stretch from Trieste to the border towns of Slovenia in the India-bound petrol-powered C 300 Cabriolet. 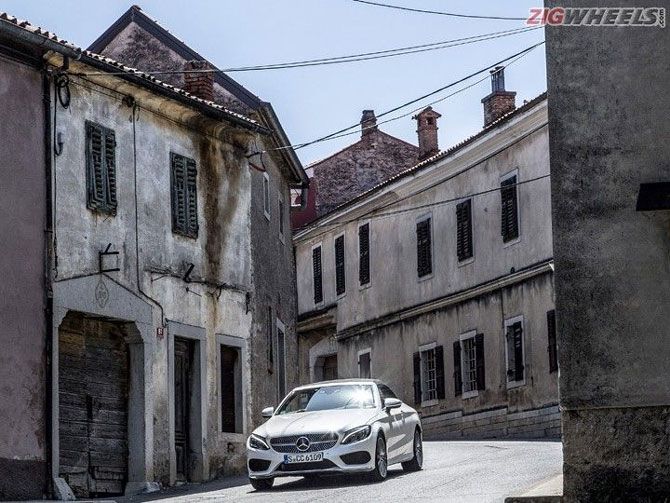 The Convertible has subtle but noticeable differences, just like all the new-age Mercedes-Benz Coupes and Convertibles, over the new C-Class sedan, which is on sale in India.

The LED headlights of the C 300 Cabriolet are similar to that of the C-Class, but the grille has subtle differences. Unlike the latter’s twin-slat layout, the former gets just one chrome strip holding the large tri-star logo. In fact, the entire front fascia of the Cabriolet is similar to that of the two-door Coupe version of the C-Class with elements such as the air dams, chrome lip-spoiler and others. 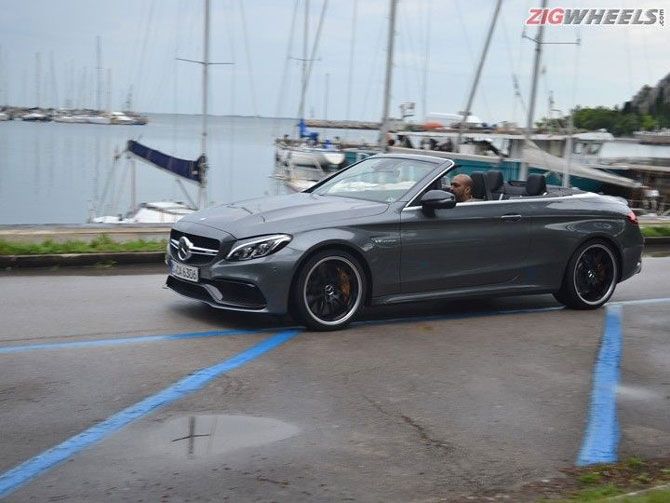 Not surprising, because the convertible is indeed based on the Coupe version. With its soft top on, the silhouettes of the C 300 Cabriolet resembles closely that of the Coupe’s including boot lid and the wraparound tail lamps.

So as we hit the motorway to Slovenia, we got a good look of the rear of the Cabriolet, while following a fellow auto journalist. Similar to that of the sedan, the droptop also retains the S-Class Cabriolet esque rear profile with its boot sliced at about 45-degrees imparting it a dynamic, leaned-forward stance. 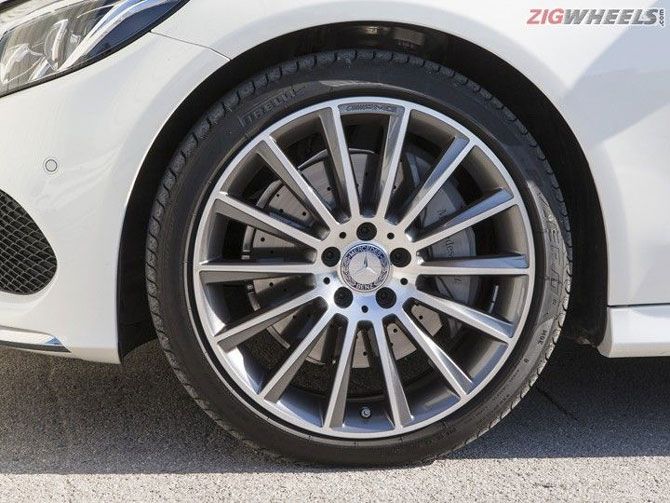 The boot sits higher in contrast to the C-Class sedan courtesy the soft top.  Hence, the rear three-forth doesn’t look as appealing to us as the front half of this car, with its soft corners and high boot.

Step inside and its opulent interiors will make you forget everything. The choice of colours, materials and, Mercedes’ top-class finish make the C 300 stand out. 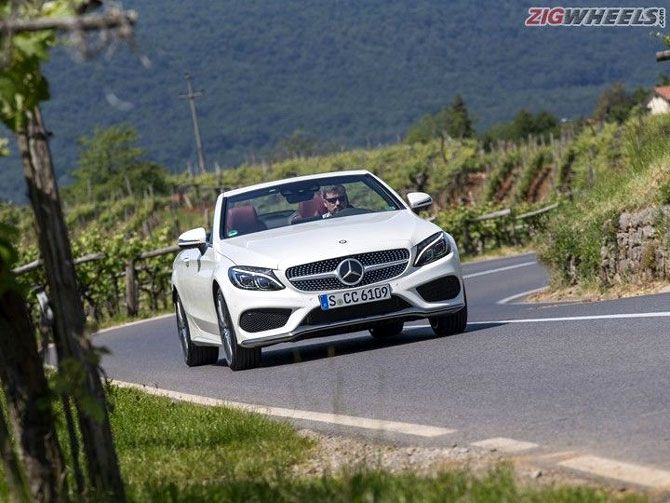 The dashboard layout is a straight lift from the regular C-Class, but subtle differences make it look sporty, complementing its exteriors appearance. Use of matt black surfaces instead of the glossy wood appliques has altered the cabin’s characteristic. While satin aluminium continues to highlight the circular air-conditioning vents and climate control buttons.

The sporty bucket type seat of the convertible are cosy and you sit low. It also comes with optional sun-reflecting leather upholstery to keep the cabin cooler even with the roof down and our car was equipped with it. 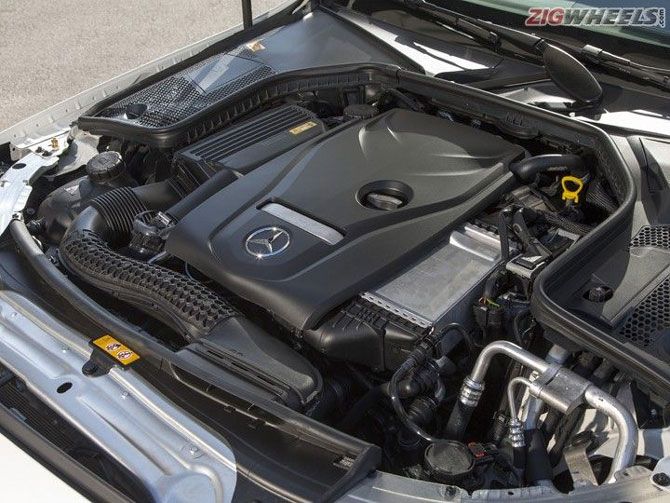 The central console has a waterfall layout, flowing in between the driver and passenger seats. Also, it acts as a central armrest. Even the dashboard, the door panels and rear side panels have a smooth-flowing touch to them, all of which are in harmony with each other.

Similar to that of the C-Class Coupe, the droptop also gets just two doors to deal with. To hop onto the back seats, the front seats have to be nudged slightly forward. 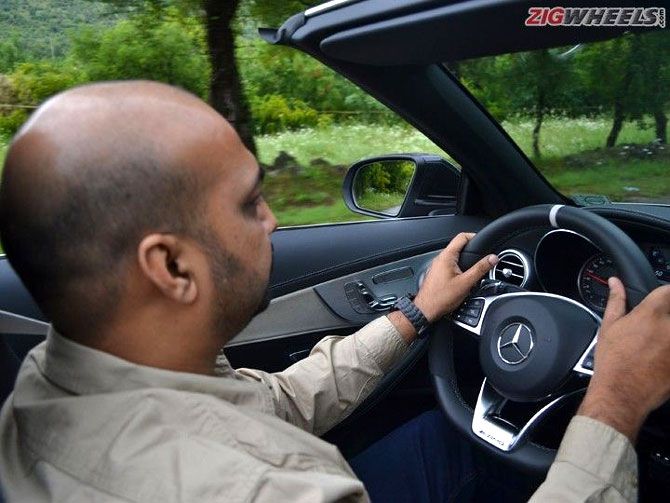 This can be a task for some! Speaking of the rear seats, transmission tunnel remains intrusive, but there’s decent room for two adults. However, the rear seats could have done with some more under-thigh support.

Just like its sedan sibling, the C-Class Convertible comes with a long list of features. Ours was an international spec one and was loaded with all the goodies such as a Burmester audio system, head-up display, autonomous braking and lane departure, Mercedes’ latest infotainment system with navigation, and air suspensions to name a few! 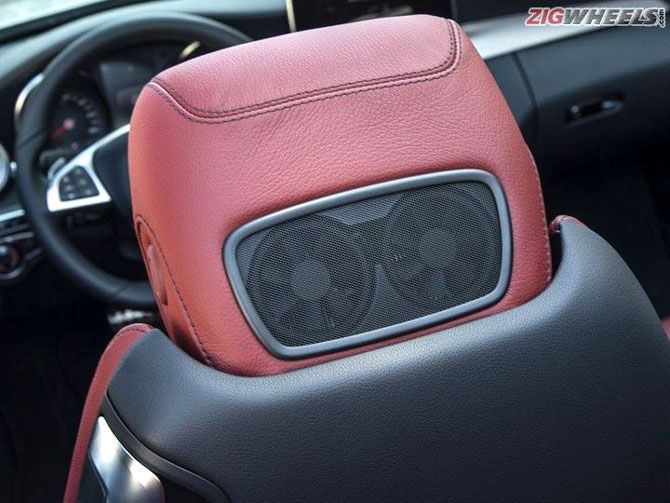 Having said this, the German automaker continues to have an aversion to touch-based infotainment system and the cabriolet is no exception. However, you do get a high-def display coupled with a touchpad and a rotary dial, which gets the job done.

The C 300 Cabriolet comes with an optional AIRCAP. Basically, it is an electric windbreak system, which in simple terms keeps the cabin as quiet as possible and free of deafening wind draught in open-top driving. 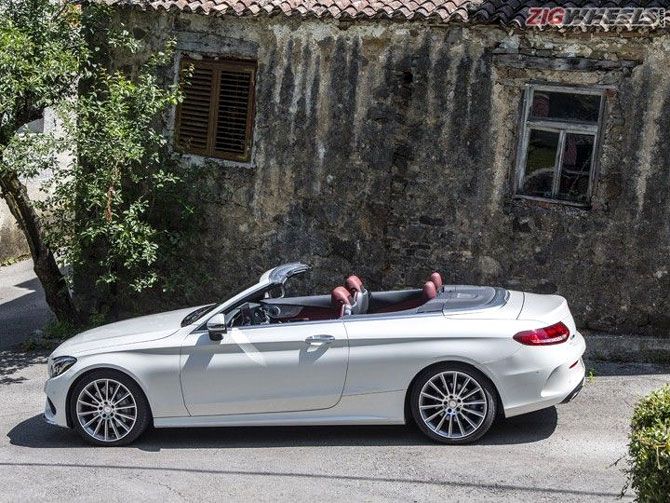 It can be activated by a push of button and functions likes a front wind spoiler. Besides this, the drop-top also comes with an optional AIRSCARF. It is a neck-level heating system, which releases warm air from the head restraints to create a pleasantly warm environment around the head and neck.

We didn’t get much time with what is commonly known as wind-in-the-hair-experience thanks to the rain gods. But on some occasions, when the rains subsided for a bit, we quickly tumbled down its fabric top. Speaking of the drop-top, the Cabriolet takes just 20 seconds to go topless and can do so, while being driven under 50kmph. 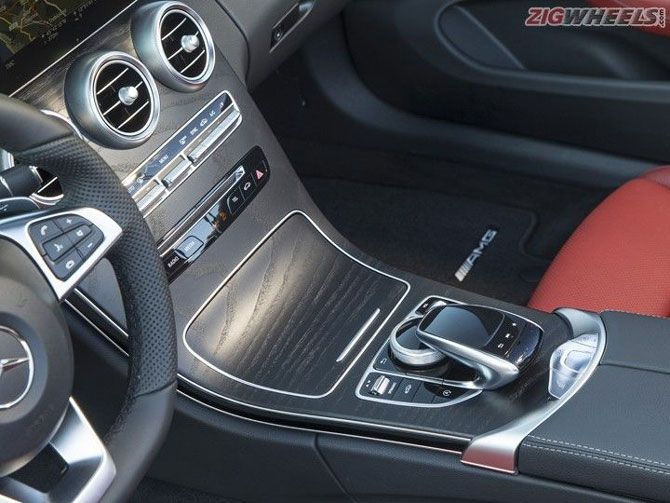 There are angrier AMG versions of this humble C 300 as well so why were we driving this? Because the C 300 will arrive first on our shores in comparison to the AMG versions. Speaking of which, there is a Mercedes-AMG C 43 Cabriolet and a more exciting and powerful Mercedes-AMG C 63 S Cabriolet equipped with a roaring 510PS V8 petrol in the pipeline!

The C 300 Cabriolet features a lively 1,991cc four-pot petrol engine, which puts out a healthy 245PS of peak power and a meaty 370Nm of max twist. 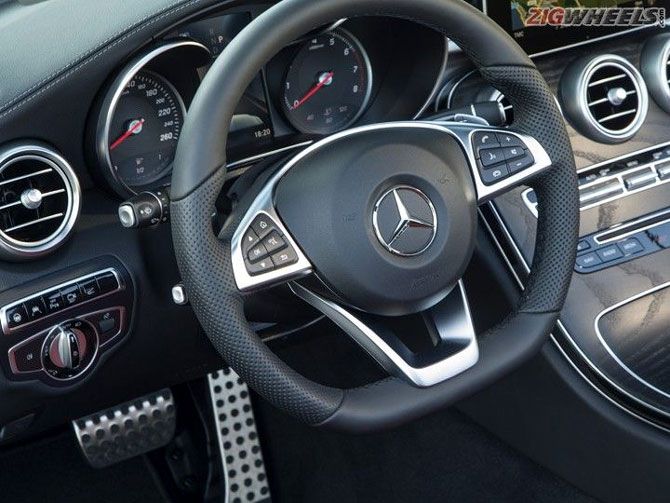 The motor is coupled to a brand new 9-speed automatic transmission, which offers lightning fast shifts and silky transitions. In contrast, the C-Class sedan in India comes mated to a 7-speed auto box and we are hopeful that it will also get this transmission, soon.

The Cabriolet sprints from naught to 100kmph in 6.4 seconds before hitting a top whack of 250kmph, which is respectable considering the droptop is heavier than the coupe it is based on. And it uses more body strengthening materials to compensate for the missing roof and structural rigidity of a sedan. 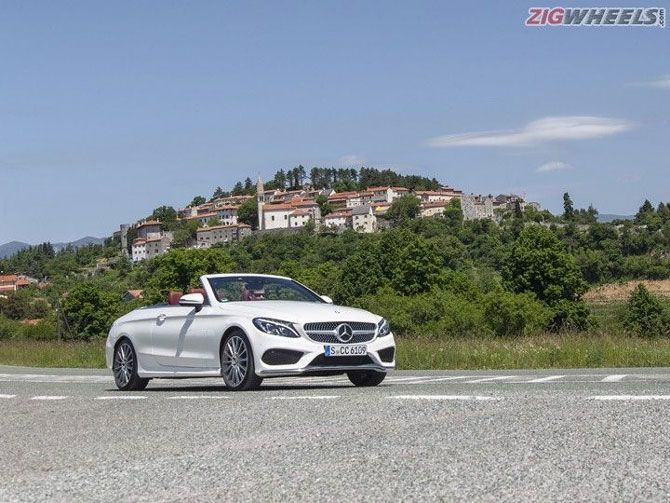 The C 300 comes with a rear-wheel-drive setup as stock, but can also be had with the Mercedes-Benz’s 4MATIC permanent all-wheel drive.

However, in our price-sensitive market, we don’t feel the all-wheel-drive option will be offered. On the windy and twisty roads around Trieste, the rear wheel driven C 300 was really exciting! Its steering feel and feedback only elate the whole driving experience further.

The optional AIRMATIC suspension that our car was fitted with also takes a lot of credit in its drivability. With its adaptive damping system, it offers exceptional ride comfort in practically every road condition possible. 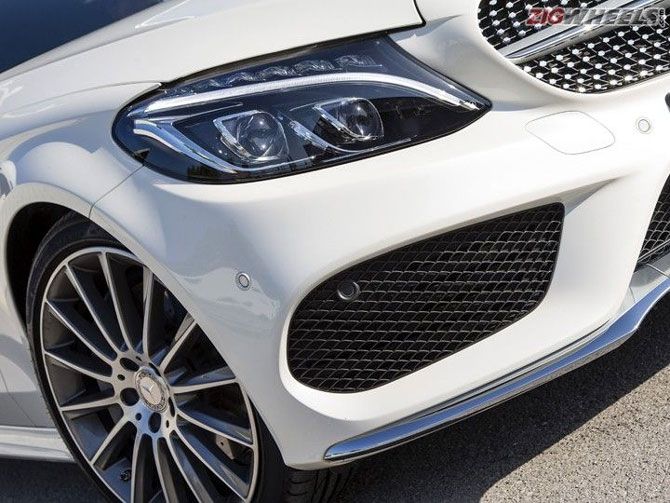 There is nothing to crib about the immaculate European roads, hardly anything which could unsettle this car. But it would be a different story altogether in India. Moreover, if you push it harder, the suspensions automatically lower the car to further improve its handling, which in turn, also lead to improved fuel economy.

After having the C 300 all to ourself for a day, we got the maniac Mercedes-AMG C 63 S to drive for the next day. It 3,982cc V8 bi-turbo petrol motor chucks out a thumping 510PS, shaving off more than two seconds from C 300’s 0-100kmph time by achieving it in just 4.1 seconds! This is just as mad as any other Mercedes-AMG on sale in our country and around the world! 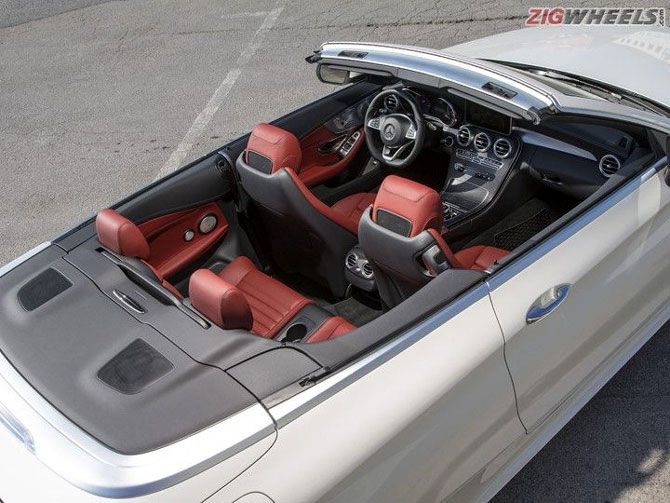 The C 300 Cabriolet is expected to hit the showroom in India by the end of this year or sometime early next year. Though it will be the most economical convertible from Mercedes-Benz in India, but due to its CBU import (completely built units) will demand a sizeable premium over its locally assembled sedan sibling.

Convertibles are niche products in our country. The C300 is for those looking for something unique and will serve well as their second, if not third, car. We estimate that it will cost somewhere around Rs 55-60 lakh, which is about Rs 15-20 lakh more than the Mercedes-Benz C 200 sedan. 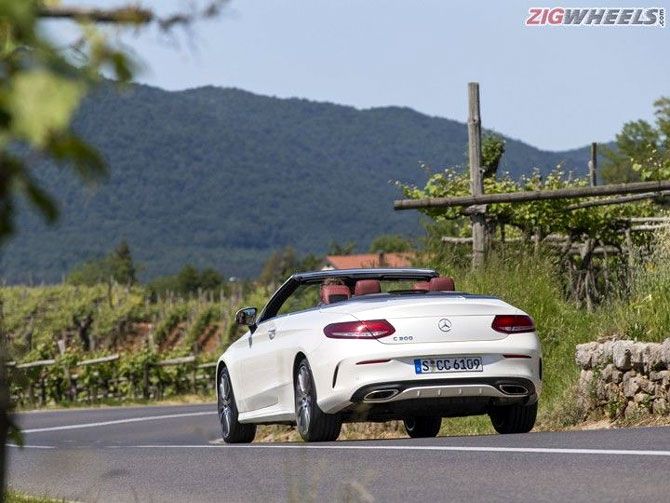 The C 300 Cabriolet is almost as fast as any decently priced sports car in our country. While cocooning you in the level of sheer comfort and safety that we’ve come to expect from any three-pointed star saloons. For the money that you will shell out, what you get is a comfortable and fast droptop, which will turn heads wherever you go. Additionally, driving feel of the topless C-Class Convertible is like no other.

The images are of the European version of the car, hence it sports a left-hand drive. 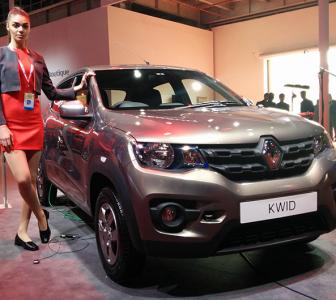 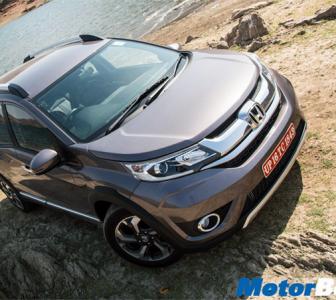 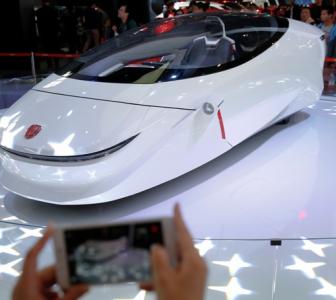 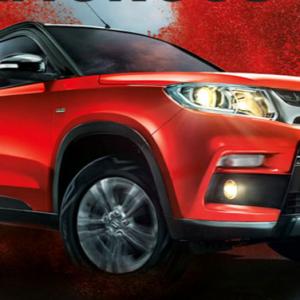 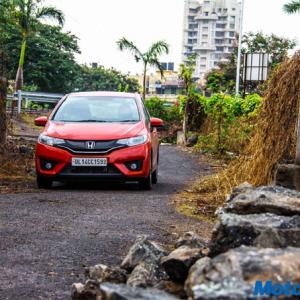