Prices for the F-Pace start at Rs 68.4 lakh, for the base spec Pure model with the 2.0-litre diesel motor. For the top-spec R-Sport variant, you will have to shell out a whopping Rs 1.02 crore though, and that is before you get to the options list or pay for the insurance.

Jaguar has done something it has never done before, by making an SUV. We drove the F-Pace to see what the hype is all about. 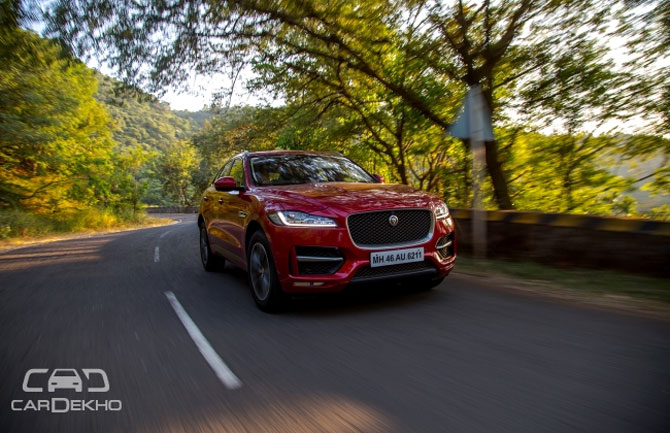 True to its roots

Feast your eyes on the F-Pace, the big cat in the Jaguar family. Based on the C-X17 concept crossover that Jaguar showcased back in 2013, it doesn't look all that different.

Most cars inevitably end up being toned down versions of the concepts that they are based upon, but that clearly isn't the case with the F-Pace. You also get a sense that the design is slightly outlandish, because it is a Jaguar. If anyone can pull off a concoction like this, it has to be the legendary British luxury car maker. 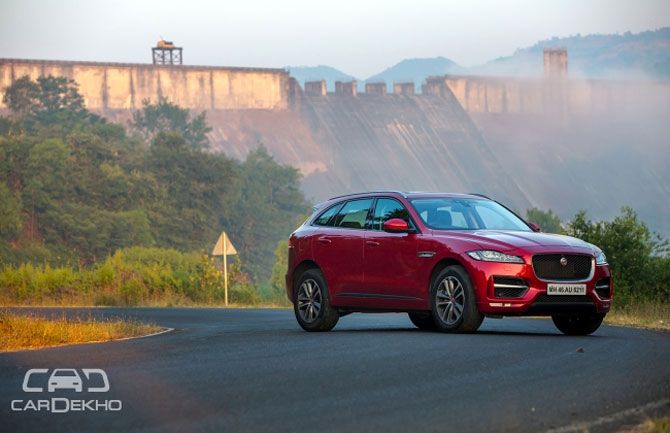 The big geometric grille laced with mesh and a big Jaguar insignia grabs the spotlight right away. The angry looking all-LED headlamps with the signature 'J-Blade' daytime running lamps and large intakes both do their bit in lending the F-Pace the trademark Jaguar face.

Aggression is clearly the flavour of the season, and this one has it in abundance. The contoured bonnet, the bulging brawn of the wheel arches and big 19-inch wheels look purposeful and clean. 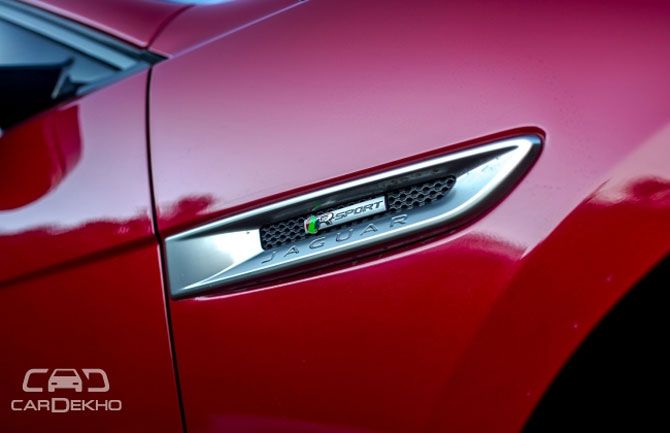 There are hints of the F-Type too, like the chrome tab on the front fender, the slender tail lamps and curvaceous rear haunch, all draw their inspiration from the two-seater sportscar.

The stance is typically Jaguar too, akin to a big cat waiting to pounce. It is worth noting that our test car was the top-spec R-Sport edition, which gets a delicious set of 19-inch wheels.

Lower trims - Pure and Prestige - available with the smaller 2.0-litre diesel motor (R-Sport gets the V6 diesel) get a rather boring set. 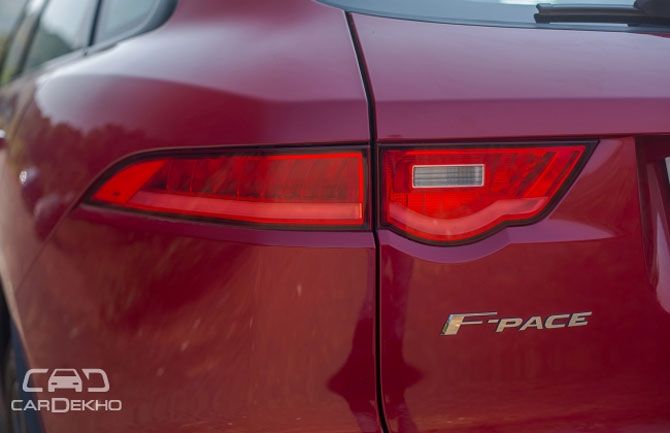 Jaguar will let you choose your wheels you like (in fact, you can play around on their online configurator too). We have no doubts though, that the bigger wheels add a lot to the athletic appeal of the F-Pace. 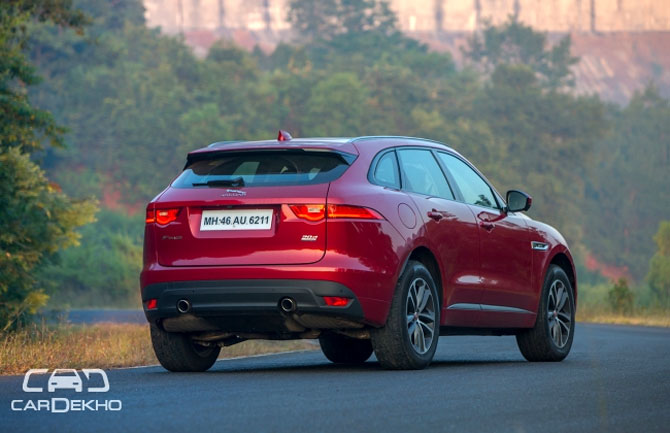 Unlike other SUVs that wear subdued clothes, the F-Pace has no qualms standing out in a crowd. The design turns quite a few heads when on the move, and stays true to the current Jaguar design philosophy.

While there's no denying that it looks striking (especially in this shade of red), it does end up looking a tad too similar to its stablemates, more so when viewed head on. There's an uncanny resemblance to the XF which is hard to shrug off, but that’s not a bad thing at all. 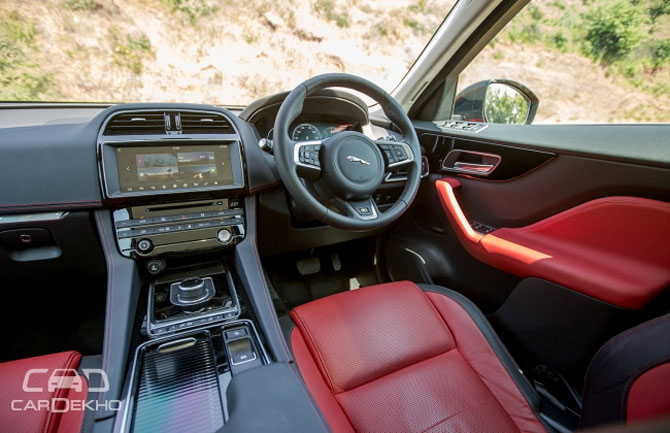 The similarities continue inside the cabin as well. Step inside and the layout, quality of materials and equipment list is almost identical to what you are used to seeing in a Jag, though it clearly oozes a classiness that does its bit to give the SUV’s insides that distinctive feel. 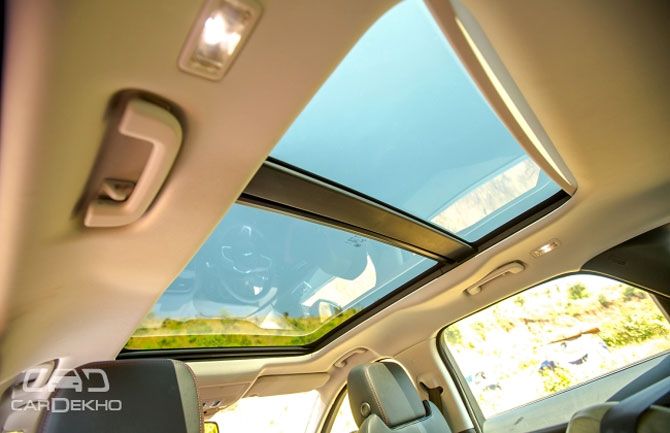 The cabin also has the usual theatrics including the pulsating back light for the start-stop button and the rotary gear knob that rises up to the occasion (quite literally).

Compare it to a top-spec XF, and the tech on offer isn't all that different either, like the 12.3-inch TFT LCD instrument cluster (we love the bright colours!), 10.2-inch 'InControl Touch Pro' touchscreen infotainment system and Meridian speakers. 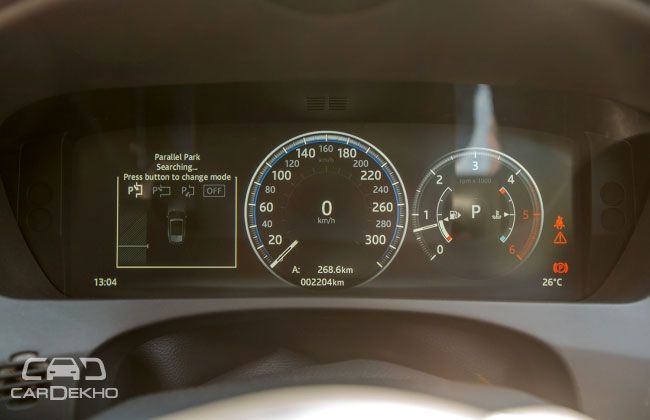 The F-Pace delivers the SUV experience well when it comes to the seating. You sit nice and high, and Jaguar has borrowed some nuances from Land Rover too. Take the window switches for example - they are placed on top of the door pad much just like the Land Rovers. 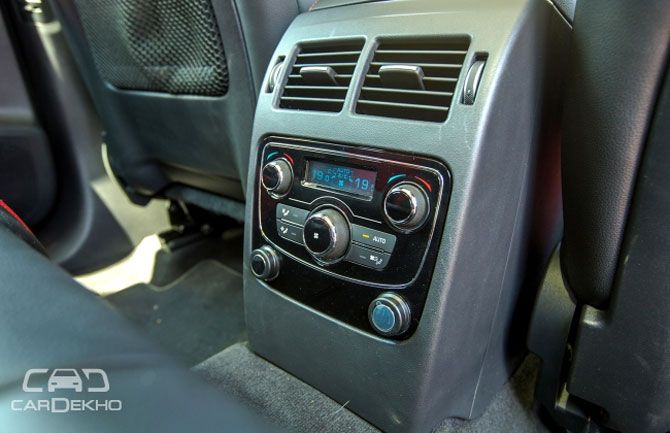 The elbow-rest (where you would usually find your power window switches) are home to the memory buttons for the 12-way adjustable driver’s seat. 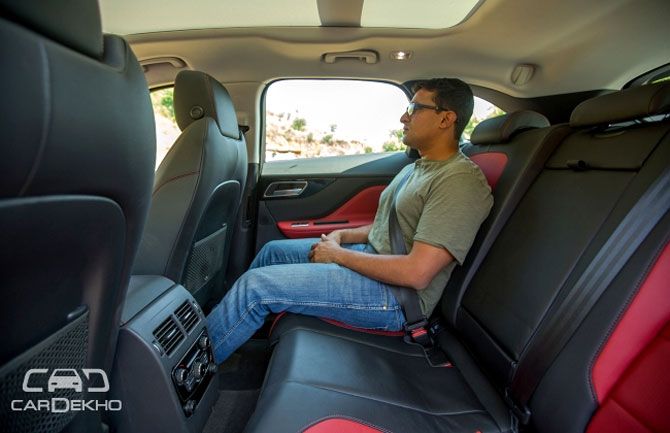 The configurable mood lighting, massive panoramic sunroof and comfortable seats make the F-Pace a cool place to be in.

The SUV is pretty big from the outside, and has ample space to seat five, and there’s several thoughtful storage spaces too. The boot offers 650 litres of cargo volume, which can be bumped up to a mind boggling 1740 litres by folding the rear seat down. 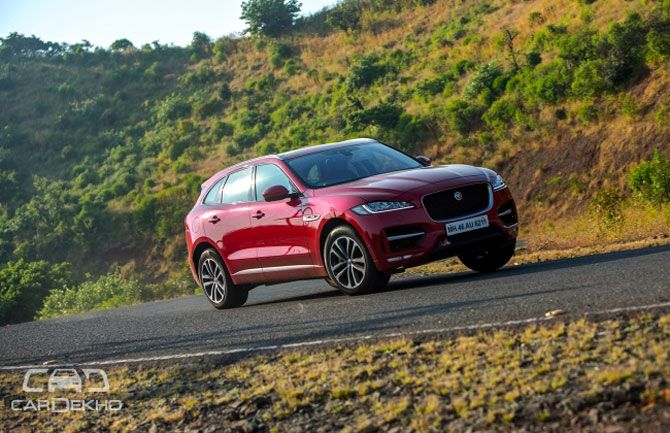 The fact that the F-Pace isn't equipped with air suspension at its price point is a bit surprising. Of course, you can add a million rupees to your cheque and Jaguar will bundle it in, but we think it should have been standard.

The ride has a stiff edge to it at lower speeds, but it won't let you cringe or hear a thud. We missed spotting a few unmarked speed breakers on our drive, and are happy to report the F-Pace never landed hard. It lands like a cat - quite literally.

213mm of ground clearance and chunky tyres can handle uneven terrain easily, no matter how bad it gets.

The only perceivable downside is that the tyres tell you what type of surface you are driving on. You wouldn't mind this on smooth tarmac, but paver blocks and concrete roads make themselves felt inside the cabin a little more than you would like. 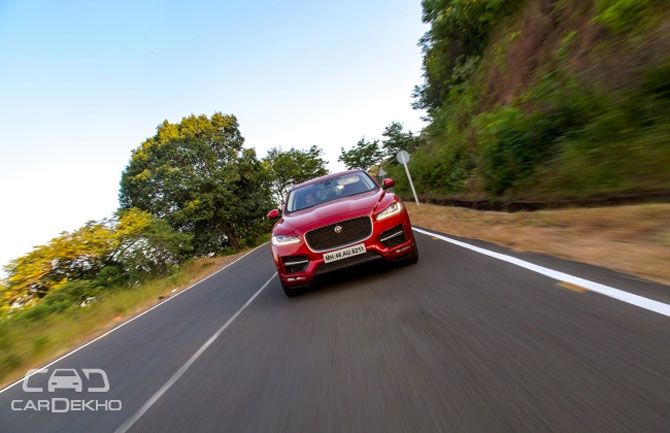 The cabin remains rock steady and flat when you are cruising too. A quick dash on the Mumbai-Pune expressway quickly brought the F-Pace's road tripping abilities to the fore. It munches miles effortlessly, and other than a bit of bobbing from the rear end over large expansion joints (at triple digit speeds), there's nothing to fault with.

If anything, the F-Pace feels more like the luxury sedans Jaguar is known for rather than feeling like an SUV, albeit one that is being driven in Sport mode.

The suspension setup is thus delightful with its air of stiffness and lets you enjoy long curves on highways at speeds without a hitch, while also offering a good ride on your daily commutes. And that’s what we expect of a performance SUV, don’t we? 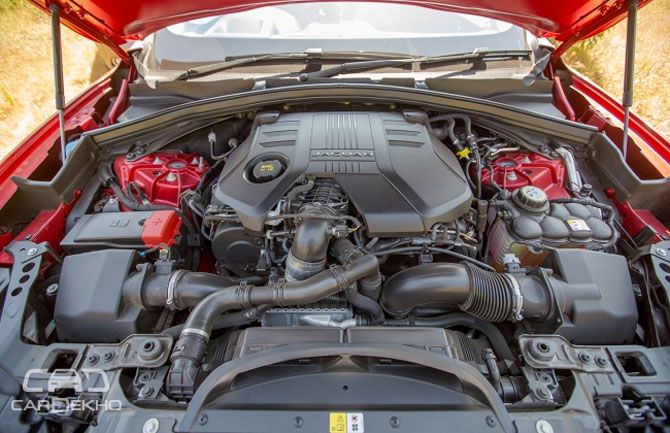 When you are ambling about at triple digit speeds, the 3.0-litre diesel V6 is barely stuttering. In fact, it doesn't even trot over 2,000rpm unless the speedo is showing speeds in excess of 140kmph.

The engine feels responsive and ready, and there's a boatload of torque raring to go as you flex your right foot. There's no perceptible turbo lag, and once you do decide to put the hammer down, the 8-speed automatic doesn't hesitate one bit to drop a few gears.

The motor feels relaxed and composed even when the speedometer needle is swinging to the other side rather furiously.

The engine doesn’t bellow or scream or make itself heard, and in fact there were times when it was hard to believe there’s an oil burner under the hood. Of course, the insulation ensures whatever little clatter the engine makes doesn’t reach you inside the cabin. 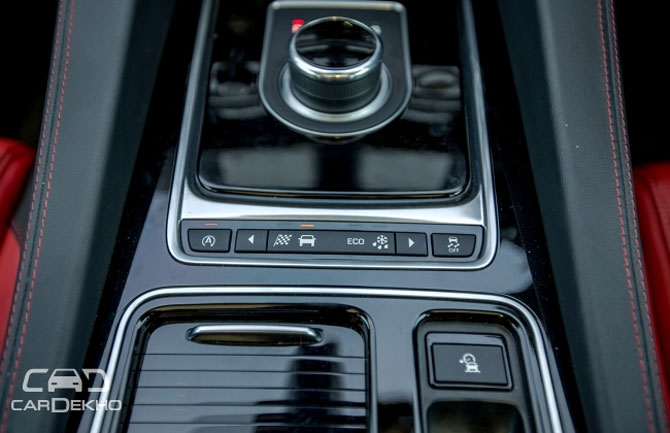 And like all Jaguars (almost all high-end cars in fact), the F-Pace gets a set of drive modes that one can choose from – Normal, Eco, Dynamic and Ice/Snow.

The default 'Normal' mode works best in most scenarios and provides a healthy blend of comfort and performance. Dynamic mode obviously tightens things up a bit everywhere, and responses from the engine are slightly more urgent and the steering offers a more weighted feel too. 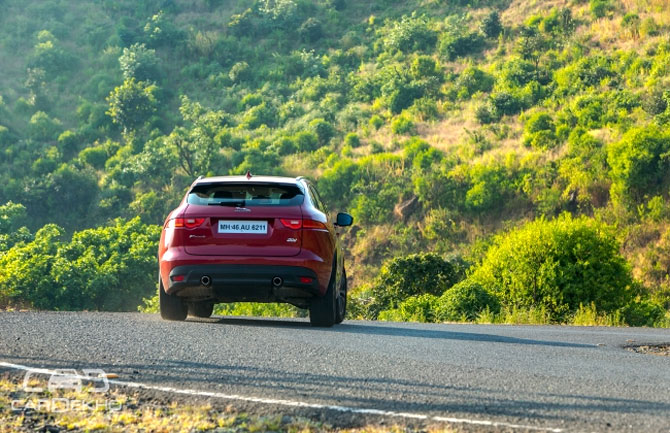 For its size, the big Jaguar is pretty easy to chuck into corners. The steering feels near precise though some more feedback would have been nice, especially around corners.

Traction control also cuts in a bit too abruptly, but if you are brave enough to switch it off, the tail is more than willing to step out around bends.

The all-wheel drive setup works brilliantly and lets you carry some extra speed into corners, and there's an astounding amount of grip from the tyres that offer lots and lots of confidence around the twisties. 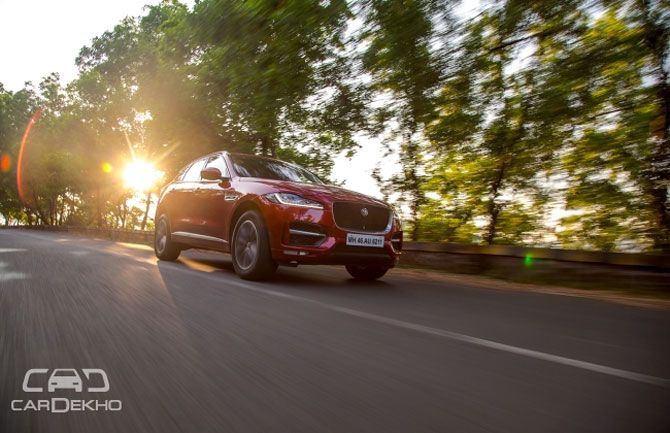 Prices for the F-Pace start at Rs 68.4 lakh, for the base spec Pure model with the 2.0-litre diesel motor. For the top-spec R-Sport variant, you will have to shell out a whopping Rs 1.02 crore though, and that is before you get to the options list or pay for the insurance.

The only competitor for this kitty though is Porsche’s Macan, the only other SUV we can think of that’s worthy of being called a ‘performance’ SUV. Come to think of it, the F-Pace does justice to the tag quite well too.

There's a healthy blend of practicality, performance, everyday usability and of course snob value and a sense of exclusivity, just as you would expect of a Jaguar.