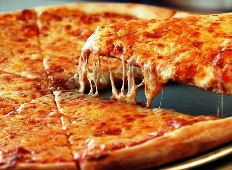 A lobster off the Canadian coast, thyme-scented mascarpone and an ounce of Iranian Beluga caviar -- all that on a pizza.

Built at a cost of Rs 1,700 crore (Rs 17 billion), The Leela Palace in New Delhi is the country's most expensive hotel.

And The Qube, the all-day diner, is its showpiece restaurant.

In contrasting shades of black, white and orange, The Qube is a mammoth structure, akin to a glasshouse; old-world mashals (flaming torches) surround a pool of water.

Outside, at one end of the lawn, is the metallic sculpture of a goddess by Subodh Gupta.

Since its inception in April last year, The Qube's signature dishes -- the wood-oven-baked black cod, the red snapper with spicy mango sauce and Maryland crab cakes -- have found favour with Delhi's gourmet crowd.

We, three colleagues, are here on another mission, to pass verdict on the country's most luxurious pizza, priced at Rs 9,999 (taxes, of course, extra) -- or, what you would pay for 20 large Non-vegetarian Spicy Chicken Pizzas from Dominos.

But nothing gets even close to such a price. Is it worth this much?

It's called the High Life, and is the most expensive item on the menu booklet -- a wood-oven-baked pizza with Canadian lobster and thyme-scented mascarpone, finished with 28 grams of caviar.

The restaurant staff tells us that its eight slices won't be enough for us three.

These are well-seasoned and the serving size is generous.

The Qube gets about four orders a month for the High Life pizza.

The staff asks if we are ready for the High Life.

Is it to make sure we haven't changed our mind? Our resolve is unshakeable.

And then it comes.

The pungent scent of truffle oil rises, signalling the arrival of our pizza.

A legion of the staff, led by the chef himself, approaches us, toting a large tray. Setting a rather perplexing arrangement before us, they disappear after a rushed 'Enjoy the High Life!'

This pizza is an unusual concoction.

A white pizza, it does away with the regular tomato sauce at the base and instead opts for dollops of a thin mascarpone base and thyme with a generous sprinkling of ricola leaves.

The mozzarella cheese is minimal and can go unnoticed.

The most expensive ingredient is the Atlantic lobster, caught in the icy waters off the coast of Canada and imported to India.

"They are the best in both taste and nutrient value," The Qube's Sous Chef Gagandeep Singh Sawhney tells me a few days later.

"They are high on protein and low on saturated fat." Adding to the lobster, which is sourced by the hotel every 15 days, is an ounce of Iranian Beluga caviar, spread out generously on the pizza with a mother-of-pearl spoon.

Unfortunately, many expensive ingredients do not the perfect pizza make.

With much anticipation riding on it, the High Life fails to impress.

At 13 inches across, and eight slices, the pizza resembles an ordinary wood-oven one and fails to impress in presentation.

The saving grace is the surprisingly promising combination of lobster on the thin crust. While it is not rare for seafood toppings to be thrown over a pizza, this lobster leaves other options far behind.

As far as pizzas go, however, on the taste buds this one falls flat.

As well-seasoned as the lobster is, it is after all, bland meat.

We can't help but crave the olives and bell peppers that would have added a much-needed tang. What's more, a good pizza is characterised by its cheesy goodness, of which the High Life is devoid.

While we relish the lobster tails and the mascarpone base, we do not appreciate the clumsily diced tomatoes that lend the pizza a rather shabby appearance.

If a seafood pizza is what you are looking for, we recommend that you opt for the Marinara pizza at Spaghetti Kitchen (13 inches across, eight slices, Rs 840 inclusive of taxes).

Topped with spicy seafood (fish, prawns, squid, mussels), sundried tomatoes and capers, this wood-fired pizza lives up to its name.

We are not served the right cutlery, either.

Without a pizza-cutter in hand, we proceed to awkwardly split the slices.

The tomatoes fall off even as we help ourselves.

"We chose to do away with sundried tomatoes because they are salty and would make the dish more pungent," explains Sawhney.

"No other topping should take away from the unique flavour of the lobsters." In this case, however, the requisite wholesomeness is missing.

The staff ambles about, helping us out eventually.

"The experience is an exclusive one.

"A customer ordering such a pizza shouldn't even have to look up for more than five seconds for service," says Sawhney.

As another staff member lays forth a single stemmed glass of a Grey Goose Vodka chaser -- another lavish accompaniment to the High Life -- we ask the impertinent question, "How exactly are we meant to savour this?"

The vodka -- frozen, not shaken or stirred -- is presumably served to enhance the flavour of the lobster and the caviar, the two highlights of this dish.

Yet, as guests, we are flabbergasted.

While a 13-inch pizza can easily be split between three eager foodies, how do three people enjoy one not-so-generous dash of vodka and blue curacao?

The staff appears tongue-tied, and calls the chef. "The vodka will bring out all the flavours.

"Enjoy it with the pizza," we are told mysteriously, yet again.

Odd, we think, and proceed to awkwardly pass the sole glass of vodka around, feeling rather dejected that we have not been served three separate drinks.

The experience, unfortunately, goes downhill after the vodka-sharing. Our pizza is cold and soggy by the time we finish our meal.

The vodka didn't help, either; a pizza is best washed down with a chilled beer, we strongly feel. On second thought, we could have done away with the generous serving of caviar as well.

Having spent nearly Rs 14,000 on a rather anti-climactic lunch, do we feel exclusive and important -- the very premise on which this pizza was introduced? Sadly, no.

We suggest you opt for the lavish buffet at The Leela and forget the lobster pizza.

It tries too hard to impress. As we leave, a polite manager asks us, "How was your pizza?" 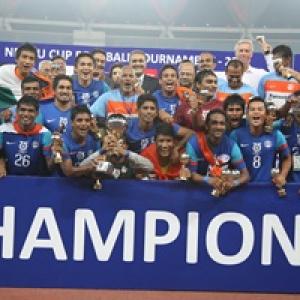 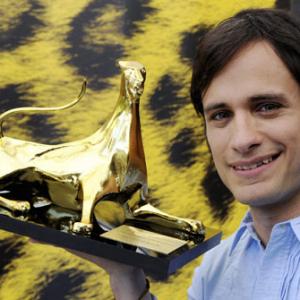 Gael Garcia Bernal: I'd love to do a Bollywood film