Call for fiscal autonomy to Union Territories with Assemblies may get louder with ‘special status’ to J&K in the Finance Commission, say experts.

The Jammu and Kashmir Reorganisation Act, 2019, provides for the President to refer to the 15th Finance Commission to include the Union Territory of Jammu & Kashmir in its Terms of Reference.

This will allow J&K -- a UT with a legislature -- to receive the benefits of devolution of central taxes, something that it has been previously enjoying as a “state”.

However, a similar concession has never been extended to UTs with Assemblies - Delhi and Puducherry - by the successive Finance Commissions despite repeated representations from such UTs.

The Constitution provides for a state government to receive the benefits of devolution of central taxes, whereas a UT gets ‘grants’ from the central government.

Experts say the latest move by the Centre in case of J&K builds a strong case for fair treatment of other UTs with Assemblies in this regard.

The Finance Commission, established under Article 280 of the Constitution of India, provides for the distribution of net tax proceeds from the Centre to states and also determines the principles governing grants-in-aid of revenue of state from the Consolidated Fund of India.

However, the Commission does not consider UTs as states or determine any principles for grant-in-aid.

“One reason could be Article 270 which, being the enabling provision for the distribution of taxes levied by the Centre and shared between states, is silent on UTs, including those with Assemblies,” notes senior advocate K V Viswanathan.

Curiously enough, the GST Council, constituted under Article 279A of the Constitution, consists of finance ministers or any other minister nominated by the respective state governments, including the representatives from UTs of Delhi and Puducherry.

As per specific provisions of GST laws, UTs with legislatures are treated as ‘state’ for levy of GST, as well as devolution of GST compensation cess.

According to Sudipta Bhattacharjee, partner, Advaita Legal, the newly formed UT of J&K getting a ‘special status’ will only strengthen the claim for similar treatment by Delhi and Puducherry.

Uniformity with respect to fiscal autonomy may become difficult to be denied to Delhi and Puducherry, if J&K is allowed a share of central taxes by the Finance Commission, he adds.

Viswanathan points out that, so far, courts have always adopted a contextual approach in declaring states to be inclusive of UTs by relying on Article 367 to apply the definition of State under Sec 3(58) of the General Clauses Act.

Shubhankar Dam, professor of Public Law and Governance at University of Portsmouth School of Law, highlights the fact that Delhi contributes nearly 13 per cent of all direct taxes, but does not receive a share of it when funds are redistributed to states.

“While the Modi government's move to treat J&K on a par with other states is welcome, Delhi's continued exclusion is unfortunate,” he says.

Several experts feel the Delhi government may be compelled to approach the courts over the issue.

Experts also point out that what makes the case stronger for UTs with legislatures is that they have governments that are responsible to the electorate.

“It is constitutionally improper to deny them a reasonable share of the central tax pool so that those governments can implement their electoral promises,” says Dam.

However, there could be some practical difficulties, too, while treating all UTs with Assemblies on a par.

“It would be difficult to bring about a mid-year change in established practices unless the Finance Commission is convinced on the necessity of such a change,” points out M S Mani, partner at Deloitte. 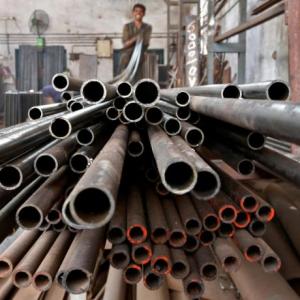