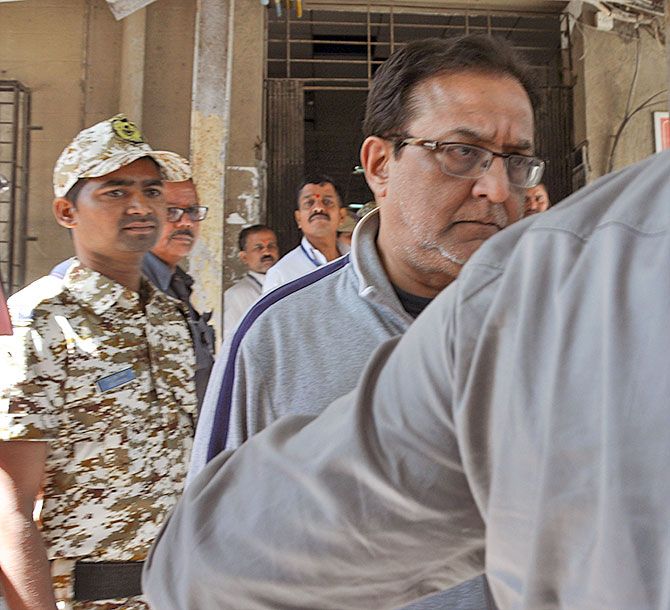 IMAGE: Yes Bank promoter and former CEO Rana Kapoor at the GT hospital in south Mumbai before being taken to court by the enforcement directorate. Photograph: Arun Patil

Who is to blame for the collapse of Yes Bank?

How did it happen to a bank that was run by 'professionals'?

Did the Reserve Bank of India see what was coming?

"Despite the RBI nominees's presence on the board and also in auditing, failures are happening. It shows the lack of exposure to the way commercial banks work," banking consultant Kalyanaraman P R -- who after retiring from the Bank of India as general manager, worked as executive director of the Federal Bank, and later as managing director Centrum Capital Ltd -- tells Rediff.com's Shobha Warrier.

Earlier this year the SBI chairman had said that Yes Bank with over Rs 2 lakh crore deposits would not be allowed to go down.
Then, there were reports about the government asking SBI and LIC to pick up 49% stake in the bank.
Why did the RBI then put the bank under a moratorium creating panic among depositors?

It will take some time for the new management to take control as they have to complete the process by infusing fresh capital. The SBI has said it is ready to put in Rs 2,500 crores and it would not have any impact on its own capital base.

But you have to follow certain measures for the smooth functioning of the institution.

You should understand that the period of moratorium is only to put in place the new board and the management, and set the ball rolling. You cannot take such a decision overnight; it will take time.

I agree with you that this has caused inconvenience to customers, but this is a process only to safeguard the interests of depositors.

The RBI said the decision was taken to ensure the safety of the financial system, but what about those who put their money in the bank?

If there was no moratorium, even if the government assured that their money was safe, there would be a run on the bank.

Today, there is no run on the bank as they can take only Rs 50,000 in a month. This is only to ensure that people don't panic and withdraw their deposits completely.

Once they see that the bank is coming back to normal functioning, the confidence of depositors will be restored.

It is a temporary inconvenience for depositors, but this is to ensure safety of their money.

Some accounts are affected and in bad shape, but that does not mean that the bank is not capable of running. The bank has a full-fledged administrative system and adequately staffed branches.

Yes, there are problems, but the RBI and the government are trying to set right matters so that the bank's functioning returns to normalcy soon.

You mean, depositors need not worry and their money is safe?

If SBI is taking over Yes Bank, I don't find any reason for the depositors to worry.

We do not know now whether it will merge with State Bank or run as an individual bank. We will know about it only later.

At the moment, the entire focus is on putting the bank back on the rails.

I don't think it is difficult for SBI to manage as they have adequate internal management capability to depute some people to manage the bank.

Yes Bank was started by professionals. Looking at the situation, do you think it was run professionally?

Yes, it was started by a well-known professional banker. He was not an incapable banker and he had very good professionals to help run the bank. But unfortunately, major decision-making processes were not done professionally.

The perception in the market is that they sacrificed long term goals to boost short term (current) profits and growth, perhaps to enhance the image and market capitalisation.

Apart from that, there are other issues that resulted in this situation. He (promoter and former CEO Rana Kapoor) was looked upon as a capable banker, so, perhaps, nobody questioned his decisions. Perhaps, he was above the board.

We have no idea as to whether the board exercised its individual judgement or not. The RBI has to find this out.

Secondly, they have followed a policy of 'high risk, high return'. Such a policy will work when the economy is doing well. That's because every unit will continue to grow even when the foundation is weak. The issues get precipitated only when the economy is experiencing a downswing. That's when such units are exposed to danger. 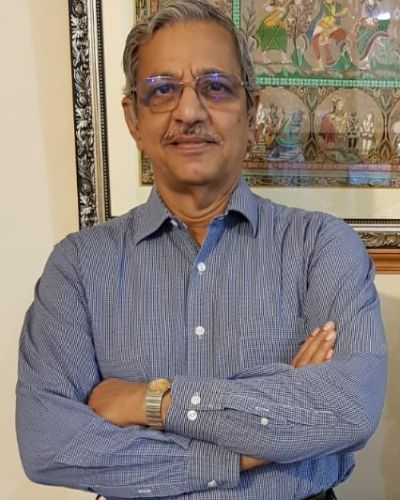 When you lend to high risk companies with unusually high processing charges expecting high returns, it will facilitate a better bottom line in the balance sheet. But what you see now is what happens when the economy is down.

Then, you have to find out whether the executives down the line who are carrying out the instructions of the top management questioned the management on such loans. If the executives are pliant, they simply carry out whatever they are told to do. They will not apply their mind.

The fourth point is a bank lends money to an entity looking at the balance sheet shown by the auditors. If the entity had done any fraud on the balance sheet or done mismanagement, the bank will come to know about it only later.

The general economic conditions also can affect the NPAs. If a few big loans go bad due to whatever reasons, it could snowball into an NPA crisis.

Do you attribute the situation to the slowing down of the economy?

Absolutely not. That can happen only with small loans. In the case of Yes Bank, the big loans that failed were all management decisions probably not taken in a very professional manner.

The ancient Tamil literary work Thirukkural says if a king is not questioned for his decisions, even a very good king can make mistakes. That's what happened here.

If the chief executive is not questioned by the board or the senior executives or anybody else in the bank, even if his intention is good, he can make mistakes and fail. It appears nobody questioned his decisions.

Yes, there can be judgemental error in a rare case, but you cannot go on committing mistakes.

So, I will also blame the system the bank had adopted for its failure.

We have been hearing about the problems faced by Yes Bank for quite some time. Banks are audited internally and externally. The RBI also oversees the functioning of all banks. So, why is it that nobody noticed such huge failures in the bank earlier?

The RBI has not been totally unaware or inactive in this matter. Rana Kapoor was asked to step down more than a year ago. That itself shows the RBI was aware that there was a problem. They have put their nominee on the board also.

The RBI has taken these steps much earlier. There was talk of other big investors stepping in also to turn the bank around. Perhaps it did not materialise for reasons not known.

The RBI would not have intervened now if there was a possibility of an external investor coming in. The RBI might have given time for the bank management to bring in investors. When they saw that investments are not happening, they have stepped in.

I would not say that the RBI did not act earlier.

The government also has acted fast in requesting the SBI and LIC to look at the bank for investment/takeover. And the RBI and the government have taken this step because this bank would have been seen as one that can be turned around.

Some people argue that the problem lies not just with Yes Bank, but with the way the RBI is functioning. Do you agree?

Not fully. I don't deny that there are issues. But I won't say that the RBI and the government were ignorant of the issues.

The government has also brought in some steps to cleanse the banking sector. Also, the RBI, SEBI, etc are continuously improving the regulatory control over such institutions where public money is involved. It is not that they are not doing anything.

In many earlier cases of private banks collapsing, the RBI nominees were on the board and the RBI auditors inspected the banks. But the RBI officials probably lacked commercial bank exposure to notice the failures or wrong doings of the bank managements.

Perhaps the RBI should think of deputing those officials who are nominated to the boards of various banks to some select banks for a specified period so that they will have knowledge of how commercial banks work and how they look at the financial system from the commercial bank's perspective.

Despite the RBI nominees's presence on the board and also in auditing, failures are happening. It shows the lack of exposure to the way commercial banks work. Knowledge of rules and regulations is one thing and practical knowledge is a different aspect that provides insight into the way different banks function.

The government recapitalised public sector banks. Now, the SBI is said to be putting in around Rs 2,500 crore in Yes Bank. Is it not people's money that is being used to overcome the failures of both public sector and private sector banks?

I agree ultimately it is tax-payers's money. But you have to look at the larger picture, that the government is trying to save a major bank and thereby save depositors's money.

As long as the bank can be turned around, it is a right step.

With so many banks collapsing and looking at what is happening in the banking sector itself, do you feel people are losing trust in the system?

Yes, when these things happen repeatedly, people will lose confidence in the system.

Once effective steps are taken to restore the functioning of these institutions, people will start feeling confident.

But there are also entities where you cannot do anything to save them. When such entities collapse, the depositors lose their money.

You must also remember, like the high-risk, high return policy of the banks, here the depositors are also following the same policy. They go to a higher risk bank to avail of that half a percent or one percent more interest.

So, depositors also have to do due diligence before putting in their money.

Do you think the government has taken steps to restore confidence among depositors?

In the current situation, the government and the RBI have taken the required steps to restore the confidence of depositors, particularly in respect of Yes Bank.