News
Business
Movies
Sports
Cricket
Get Ahead
Money Tips
Shopping
Sign in  |  Create a Rediffmail account
Rediff.com  » Business » 'Economy has been growing at around 5% the last 7-8 years'

'Instead of doing reforms and restructuring, the present government is busy with the perception that everything is fine and the economy is hunky-dory.'
'Such hollow perceptions are very dangerous for the Indian economy in the long run.'
'The real risk to India is the lack of decent employment opportunities for youth in general and educated youth in particular.'

Kindly note that the image has been published only for representational purposes. Photograph: Francis Mascarenhas/Reuters

After stepping down as the chief economic advisor last year, Dr Arvind Subramanian created a stir when he wrote recently that India's economic growth rate has been overestimated by around 2.5% points between 2011-2012 and 2016-2017, and that India was not growing at 7%.

"Given the international scenario, the 5% plus growth rate of the Indian economy is not bad," Dr Pradhan, below, tells Rediff.com's Shobha Warrier.

The new methodology in estimating India's GDP with 2011-2012 base year is an improvement over the old methodology. However, the application of that methodology by using MCA-21 (ministry of corporate affairs) databases to capture the gross value added (GVA) in the manufacturing sector has created problems.

Even Arvind Subramanian has lauded the shift from the old methodology of capturing 'volume- based GVA to value-based estimates to better capture the quality and technology changes in a modern, dynamic economy' like India.

His main point of discontent with the GDP growth figure in the new methodology is that the verifiable evidences produced by independent organisations don't support 7% plus growth rates.

For example, investments, export growth, manufacturing growth gauged through the index of industrial production and credit growth are either very muted or declining.

Then the question comes, what are the sources of such high growth in the economy?

This is what precisely the debate is.

This new methodology was debated in the 2000s and in fact, accepted by many economists, the IMF and the World Bank as an improvement over the old system. How different is the new methodology from the old one?

The new methodology is primarily different from the old one in three different aspects.

In the old methodology, such value additions after factory gates were not captured. The new methodology does it.

Second, the old methodology used the Annual Survey of Industries data as a proxy to capture the informal sector manufacturing activities. ASI data captures the economic activities in the formal manufacturing sector. Here the sample size of ASI is very thin.

Then, using this as a proxy for the unorganised manufacturing sector was inappropriate.

The new methodology using MCA databases consisting of few lakh firms (around 9 lakhs) tries to overcome the problems of old methodology in better capturing value additions in the unorganised sector.

The MCA databases give the financial accounts of few lakh firms.

But the critical question is, most of these registered firms with MCA are shell companies/paper firms only, not having any economic activities, but used for money-laundering. Even the recent NSSO (National Sample Survey Office) report suggests it.

Third, the new methodology moves from factor costs base GDP growth rates to GDP at basic prices and GDP at market prices based growth rates.

If we were to go by what Arvind Subramaniam says, were we really growing at the 'Hindu growth rate'? The general mood in the economy does not give us that impression. So where are we actually?

This is the most difficult question to answer. Actually, our economy is so vast, unorganised and diverse that no one concept can capture the entirety.

In fact, if you recall what Dr Rathin Roy from NIPFP (the National Institute of Public Finance and Policy) rightly pointed out in recent times that India's growth story of the last one-and-a-half decades was driven by the consumption boom of top 100 million middle class and upper middle class Indians.

They remain by and large happy and conformable even when growth rates are subdued.

Their consumption behaviour is getting saturated or many of them are preferring foreign products or living abroad.

The bottom 25% people were not greatly benefitted from the India shining growth story. They are as bad as they were earlier.

That is why, subdued economic activities did not create any social unrest in the recent past.

The aspirations of youth are very high. The real risk to India is the lack of decent employment opportunities for youth in general and educated youth in particular.

The CII chairman remarked that the Indian economy was a complex one and could not be captured by a few indicators like Arvind Subramaniam did. Do you agree?

I absolutely agree. Even Arvind Subramaniam didn't disagree on it. His paper is basically to identify whether India's growth story is comparable to countries with comparable parameters like investments, credit growths and export growth is verifiable.

The CII chairman also said that Arvind Subramanian's estimate omitted productivity and quality, and took only volume.
For example, according to him, agriculture had not been included in the calculation when rural infrastructure posted double digit growth in the last few years. What would you say about this?

These are the pitfalls in his paper. Even he does agree on it. But his basic argument is that high GDP growth numbers are not substantiated by the verifiable evidence produced by the independent organisations.

He also expressed his inability to incorporate all these issues in his study due to a lack of continuous data not only for India, also for other countries.

That is why he stuck to very important and largely reliable few observable parameters across economies to support higher growth rates. However, before adopting a new methodology, there should have been enough debates and discussions.

Debates should have been whether MCA-21 data bases can be used, especially when the issue of black money, shell companies rock the public and elections. There is no harm in accepting the truth.

If the economy is not doing well, better accept it and then decide on what to do. Without doing so, the government is unmindful of any criticism.

How important are big growth rate figures and perception for the growth of the economy?

Perceptions do matter for stock market investors in the short run.

Unless fundamentals are strong, all such high perceptions are bound to melt. That is why hype and perceptions did not bring much needed fresh investment into the economy.

Reforms and restructuring of economy would bring in investment.

But instead of doing reforms and restructuring, the present government is busy with the perception that everything is fine and the economy is hunky-dory.

Such hollow perceptions are very dangerous for the Indian economy in the long run.

According to you, at what rate was the Indian economy growing?

Another difficult question to answer.

My reading of the economy is that it has been growing on an average of around 5% per annum in the last 7-8 years.

That is because the sources of economic growth are subdued due to drought and failure of monsoon, and Indian agriculture is in a severe crisis.

Distress in the rural economy can be understood by the large-scale migration to cities and desire for non-agricultural works.

But given the international scenario, the 5% plus growth rate of the Indian economy is not bad. 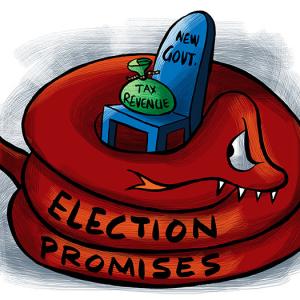